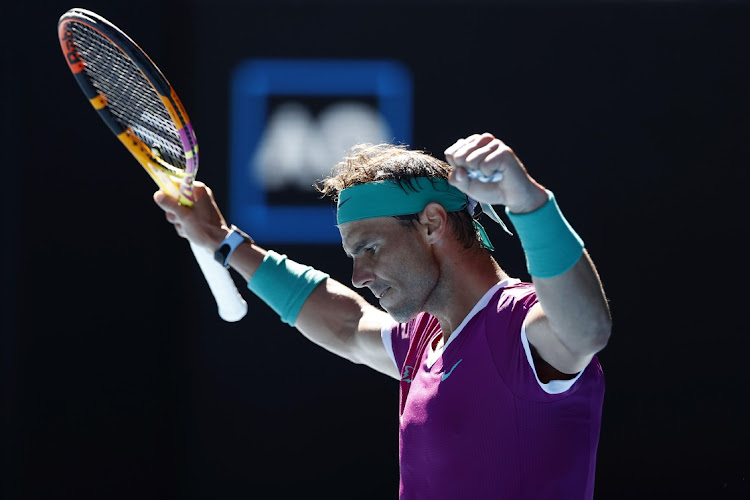 Rafael Nadal of Spain celebrates winning his second round singles match against Yannick Hanfmann of Germany during day three of the 2022 Australian Open at Melbourne Park on Wednesday. Picture: DANIEL POCKETT/ GETTY IMAGES

Rafael Nadal said his game was  improving with every match since his return from a lengthy injury break after the Spaniard eased past Yannick Hanfmann 6-2 6-3 6-4 to reach the third round of the  Australian Open on Wednesday.

The only former champion left in the men’s draw at Melbourne Park, Nadal is tied on 20 Majors with the injured Roger Federer and world No 1 Novak Djokovic, who was deported from Australia before the tournament began.

A second Australian Open title would not only break the three-way tie at the top of men’s tennis but also make Nadal just the second man after Djokovic to win each of the four Grand Slam titles twice since the sport became professional in 1968.

Nadal has, however, repeatedly said that his only objective at 2022’s opening major is to stay healthy, having returned to the Tour after recovering from a long-standing foot problem and contracting Covid-19 in December.

“I said here before the tournament start, things are not going to be perfect, but every day that I’m going to spend on court, the chances to play better are higher,” Nadal, who won an Australian Open tune-up event in January in his first tournament since August, said.

“I think I am doing things well. I’m excited about the fact that I’m going to be playing in a third round for one more time here after all the things I am going through. I don’t have big pressure on my shoulders, honestly. I don’t feel it,” Nadal said.

The 2009 champion’s only previous meeting with the 126th-ranked Hanfmann came on the Roland Garros clay in 2019, when Nadal lost just six games en route to a straight-sets victory.

Defending women’s champion Naomi Osaka was pleased that she found a way out of a second-set blip to beat American Madison Brengle 6-0 6-4 and reach the third round, staying on course for a potential fourth-round clash with top-ranked Ash Barty.

The Japanese 24-year-old, who also won the Melbourne Park title in 2019, will next meet 60th-ranked American Amanda Anisimova with a mouthwatering clash against Australian Barty potentially waiting in the round of 16.

Barty was equally ruthless in her 6-1 6-1 second-round win over qualifier Lucia Bronzetti earlier on the Rod Laver Arena and will next take on Italian Camila Giorgi.

Brengle won just nine points in the first set as an aggressive Osaka served superbly, facing no breakpoints, and returned strong to breeze through the set in just 20 minutes.

Osaka hit 13 winners to zero managed by Brengle in the set.

Her dominant performance drew praise from Andy Murray, with the former world No 1 quipping on Twitter: “Anyone hit the ball cleaner from the baseline than @naomiosaka?”

Osaka said. “It’s a little shocking, because when you’re playing, you never really think the TV is broadcasting it and other people are watching. So, yeah, definitely really surreal. It was really cool just to have someone like him talking about my game.”

Osaka said she was watching quite a few matches on television herself, including the ones of Australian Nick Kyrgios and Spanish teenager Carlos Alcaraz.