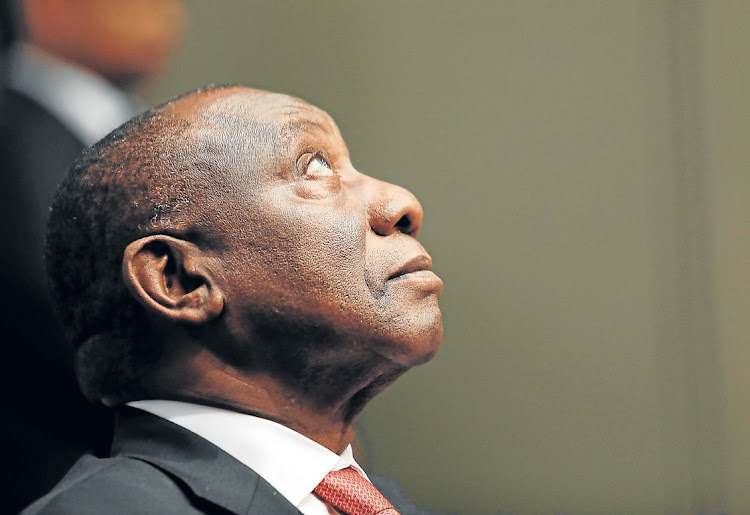 What now for SA, now that President Cyril Ramaphosa finds himself in a spot of serious bother after the charges laid against him by former State Security Agency boss Arthur Fraser?

What does this mean for the country? Will the fight against state capture and corruption be abandoned as self-serving “radical economic transformation” (RET) forces resume the levers of power, or will it suffer a temporary setback only to regain momentum?

The answers to those questions depend on what happens when Ramaphosa, who is politically severely wounded, departs the stage — for depart he will. All that is left now is the timing and the manner of his departure. Will he walk away with some dignity, or will he wait to be pushed?

Sadly, this is more than just Ramaphosa’s conundrum. It is a far bigger problem for the country than it is for Ramaphosa as a person. Given his financial resources he is certain to hire the best lawyers to fight the charges against him, and may even end up with no more than a slap on the wrist in the form of a fine if some of the allegations against him prove to be true.

However, SA, which finally appeared to be on the verge of cleansing itself of the filth of the Jacob Zuma era, will be left with a much bigger conundrum: will the devastating findings of the Zondo state capture commission be tossed aside and the pervasive corruption of the Zuma era continue apace, or will the march continue to a well-governed country in which the scourge of corruption is punished ruthlessly?

Notwithstanding his weaknesses as a leader — consider his preoccupation with illusory party unity and his legendary timidity when it came to taking tough and potentially unpopular decisions — the fact remains that Ramaphosa was the torchbearer in the fight against corruption, and he was deservedly seen as our last hope against wholesale turpitude. That is the one thing on which he was consistent from the time he assumed the presidency, and in recent months he appeared to be winning the battle within his organisation.

The revelation that Ramaphosa kept US dollars in his residence at the Phala Phala wildlife farm in Limpopo is extremely damaging to his reputation as a corruption buster. It raises all sorts of troubling questions — to which he may yet provide convincing responses — and ensures that henceforth he will have question marks about his integrity. It suggests that former ANC Women’s League president Bathabile Dlamini, who has since been convicted of perjury, was right when she cautioned that all ANC leaders have their “smallanyana skeletons in the cupboard”.

However, even more damaging for Ramaphosa are the allegations — so far not denied — that not only did he lay no formal charges with the police against those who committed the crime, but that the alleged culprits were rewarded handsomely to keep quiet about everything after informal investigations led by the head of the presidential protective unit, and that laws were broken in conducting the investigation.

Should these allegations even be remotely true, they are certain to mark the end of the Ramaphosa presidency. After all, a leader without moral authority cannot be taken seriously, and it gets worse if that leader can be said, with justification, to be guilty of hypocrisy in his treatment of those who have been similarly unscrupulous.

Sadly, the man who was preferred by Nelson Mandela to be his successor appears to be destined to go down in history as the first postapartheid president not to finish even his first term in office, thanks to “Phala Phala-gate”. It boggles the mind how a man who knew he was detested by so many within his own organisation, both for tribal reasons and because of his dogged fight against corruption, would have so carelessly gifted himself to the same crowd for slaughter.

As many others have pointed out, Fraser’s intentions — and they are obvious — in laying the charges against Ramaphosa do not matter. The fact that Fraser belongs to the Zuma-RET faction of the ANC, which has long wanted to fell Ramaphosa, is no defence. What matters is whether there is any truth in the allegations he has made, and we now know there is, even though the dollar amount stolen at Phala Phala remains in dispute.

Ramaphosa would be best advised to leave on his own terms, not on those of his adversaries. It would also help if he take the country into his confidence and own up where errors of judgment were made, even if there was no intention to commit a crime. He should take a leaf out of former finance minister Nhlanhla Nene’s book. Nene remains the only office-holder to voluntarily step down, after being confronted with something as mundane as apparent inconsistencies in his story about the number of times he met the Guptas.

History will treat Ramaphosa kindly for the steps that he took to fortify previously captured institutions such as the SA Revenue Service and National Prosecuting Authority, among others. Ramaphosa can also redeem his legacy. However, those around him with vested interests in his continued stay in office are likely to advise him against such action.

When a sitting president departs or is ejected from office our constitution stipulates that the deputy president would fill his shoes. As things stand, my homeboy David Mabuza, against whom numerous so far unproven allegations have been made, must be salivating. But what would such a prospect mean for the fight against corruption? What would it mean for SA’s credibility as an investment destination? Your guess is as good as mine.

The battle remains to be fought within the ANC, even as it lies on its deathbed. The one thing that is certain is that its factions will continue to pull in different directions and tear the party apart. As always, their motivation is what is in their respective best interests, not what is in the country’s best interests. Their eyes are trained on the elective national conference coming up in December, not on what is best for SA now. If the latter was the case they would not have been vehemently opposed to a meaningful revision of our electoral laws, as ordered by the Constitutional Court two years ago.

If the ANC were to put SA first for a change it would agree that former president Kgalema Motlanthe is the best person to deploy as the next head of state. Just as he was called upon in 2008 to finish Thabo Mbeki’s term, the ANC could turn to him now to finish Ramaphosa’s. The advantage for the ANC factions would be that Motlanthe is unlikely to put his name in the hat for the ANC presidency in December and can be relied upon to walk away quietly in 2024. And he may just do such a decent job in the position that his actions help the ANC regain enough credibility to emerge as the biggest party in the coalition government that is likely to run the country after the 2024 elections.

More importantly, the advantage of such a decision for the country would be that Motlanthe, whose moral compass is so far unquestioned, would ensure that the recommendations of the Zondo commission are implemented, that the fight against all forms of malfeasance continues, and that the enormous infrastructure investment that is necessary to stimulate the economy takes place. Since he would not be seeking to ingratiate himself into any ANC faction, Motlanthe would also be able to reduce the size of the cabinet and put SA first.

CORRECTION: June 13 2022
Due to an editing error, an earlier version of this article stated that history would treat former finance minister Nhlanhla Nene kindly for the steps he took to fortify previously captured institutions such as the SA Revenue Service and National Prosecuting Authority. This should have referred to President Cyril Ramaphosa, not Nene.

If the National Prosecuting Authority fails us now, Dubai will be the biggest winner from the arrests of Atul and Rajesh Gupta
Opinion
3 weeks ago

JABULANI SIKHAKHANE: Has Ramaphosa breached the constitution with his business interests?