Deep in the crevices of the party lies a slew of political opponents ready to fill the Magashule lacuna, and so the tournament continues 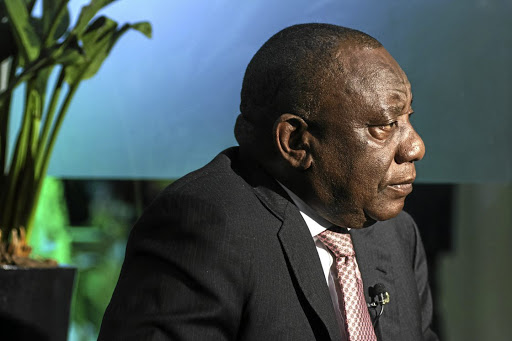 President Cyril Ramaphosa is as powerful today as he was the day before his nemesis, ANC secretary-general Ace Magashule, was suspended. The suspension has not strengthened Ramaphosa any more than it has dealt with corruption. The neutralisation of Magashule is not and will never be a panacea for the ANC’s integrity woes.

The idea that Ramaphosa has gained control of the party and its future is a parochial wish rooted in nothing more than naively believing in the myth that there is a good ANC and a bad ANC, and that the good ANC has triumphed over the bad. There is, unfortunately, just one ANC, and for this reason there is no “renewal” happening in the ANC.

Whatever is perceptively good about the party may now be buoyant and conspicuously emboldened, but beneath the froth and deep in the crevices of the movement lies a slew of political opponents ready to fill the Magashule lacuna, and so the tournament continues.

Importantly though, it was unlikely to begin with that a faction led by Magashule was to be the faction to defeat Ramaphosa at the 2022 elective conference. Recent history suggests a different pattern. It is often a smaller faction within a current dominant faction that ascends victorious. A losing faction seldom experiences any further groundswell than it had at its time of losing.

That is to say, if Ramaphosa is to be removed from power it would be by a smaller faction that delivered him his Nasrec victory. It is also seldom the case that an ANC president faces that threat within their first term of office, but the political ambitions of Ramaphosa’s quieter political predators may overcome their patience.

More pointedly, Ramaphosa’s real political rival has never really been Magashule, but rather treasurer-general Paul Mashatile and deputy president David Mabuza. Without either one of these two and their concomitant power bases Ramaphosa would not be president. They are better placed to broker their power bases to either keep Ramaphosa in power or remove him. It is also important to note that while Mashatile and Mabuza delivered Ramaphosa’s 2017 victory, they were never his allies.

Given how quickly Mashatile realigned himself after the 54th conference, it suggests he already started plotting for the next conference, signalling that his ambition has overcome his patience.

The fact that Magashule’s sidelining from the levers of power within the party stems from his involvement in the R255m asbestos audit saga in the Free State may make Mashatile and Magashule unlikely allies.

To successfully challenge Ramaphosa in 2022, Mashatile will need access to deep pockets of brittle money, and no-one is a better placed candidate for such than the man at the centre of the asbestos case, Edwin Sodi.

Sodi already has a strong relationship with Mashatile and stands ready to buy his freedom from incarceration; he has already pinned his hopes to stay out of jail on Mashatile’s influence. Magashule and Mashatile may find themselves sharing a common goal, and may find each other useful in that sense, creating room for an alliance.

Given just how narrow Ramaphosa’s 2017 victory was, he would almost certainly be outnumbered by such an alliance. Both Magashule and Mashatile are provincial superstars and proven industrious lobbyists, which Ramaphosa may struggle to match.

Magashule’s ousting from the centre counts more in favour of Mashatile than it does Ramaphosa because it has softened Magashule up to collaborating with Mashatile. Lindiwe Sisulu is also a serious contender.

So what does this Magashule’s ousting mean for Ramaphosa? At best it means Ramaphosa has momentarily pacified his political opponents and can now go ahead with a cabinet reshuffle with little resistance from within the party or the top six (now five). With the elective conference a year away, Ramaphosa’s cabinet reshuffle will signal where he imagines his 2022 ground support to come from.

Ramaphosa has shown several times in the past that he has no compunction about using strategic appointments to reward political loyalty. Ramaphosa’s insistence on keeping Stella Ndabeni-Abrahams in his cabinet despite her dismal failure to deliver on her portfolio objectives and her faux pas, is indicative that he rewards loyalty over competence.

This is further illustrated by Ramaphosa choosing small business development minister Khumbudzo Ntshavheni as the acting minister in the presidency. This was once again to signal who he trusts. A better use of Ntshavheni would not be to have her hopscotch between two crucial portfolios at the same time, but to rather have her focus all her energy on getting small businesses back on their feet. Just in case they may have forgotten, the economy has not yet recovered from the pandemic.

Ndabeni-Abrahams and Ntshavheni were crucial for Ramaphosa in 2017 and will once again be pivotal in ensuring he remains a favourite in the Eastern Cape and Limpopo respectively.

While the ANC becomes increasingly inscrutable, one thing is clear: Magashule’s suspension has created room for new kingmakers at the centre, and the next 18 months will be bloody.

POLITICAL WEEK AHEAD: All eyes still trained on divided ANC and Zulu royal ...

POLITICAL WEEK AHEAD: All eyes still trained on divided ANC and Zulu royal ...