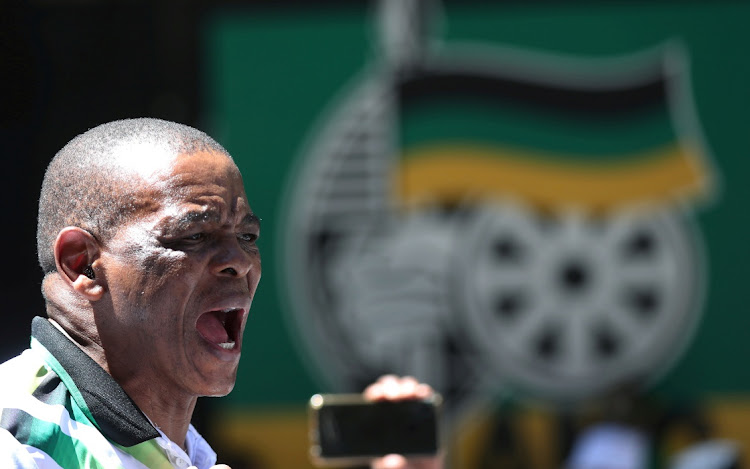 Embattled ANC secretary-general Ace Magashule has shown he is willing to take the party down with him.

Served with a letter of suspension earlier on Wednesday by his deputy, Jessie Duarte, Magashule issued a strange “media statement” on Wednesday night, in which he said his suspension is “unconstitutional” and that it will be put “on hold” as he is appealing it.

Magashule said that because he is appealing, “my suspension is thus wholly suspended, until my appeal has been heard”.

He also said the suspensions of other leaders charged with crimes are suspended.

It illustrates the extent to which Magashule is willing to plunge the ANC into crisis to remain in his position.

Nonetheless, the ANC was quick to respond to the apparent “suspension” of its president, issuing a terse statement dismissing his claims.

The party said the decisions of the national executive committee (NEC) and the national working committee to suspend Magashule and others facing charges stand. And that Magashule will have a chance to respond at an upcoming NEC meeting.

“The ANC requests that the secretary-general respect the decisions of the NEC and subject himself to the discipline of the organisation,” it said.

It appears that Magashule has calculated that appealing his suspension and moving against Ramaphosa would embolden his allies in the party.

Practically, however, his stance is only likely to isolate him even further in the NEC.

There remains a large group of NEC members who have sat on the fence in the battle between Magashule and his opponents — including Ramaphosa’s supporters.

But Magashule’s defiance on Wednesday is unlikely to sit well with leaders across factional lines and is likely to push those who have been sitting on the fence into throwing their weight behind the president.

This weekend’s NEC meeting is now set to be an epic showdown between Magashule, backed by a small group of his “radical economic transformation” allies, and his opponents, including Ramaphosa.

ANC secretary- general Ace Magashule has been issued with a suspension letter, effectively barring him from party activities for the duration of his ...
Features
5 months ago

Magashule’s ‘consultation’ with the ANC elders went as everyone expected. And, once Magashule falls, it seems he may take the forces of ‘radical ...
Features
5 months ago

The suspension of Ace Magashule could be the spark that President Cyril Ramaphosa needs to finally ‘renew’ the governing party. This would be a bolt ...
Features
5 months ago
Next Article

ANC clean-up moves up a gear with Magashule’s suspension

ANC clean-up moves up a gear with Magashule’s suspension