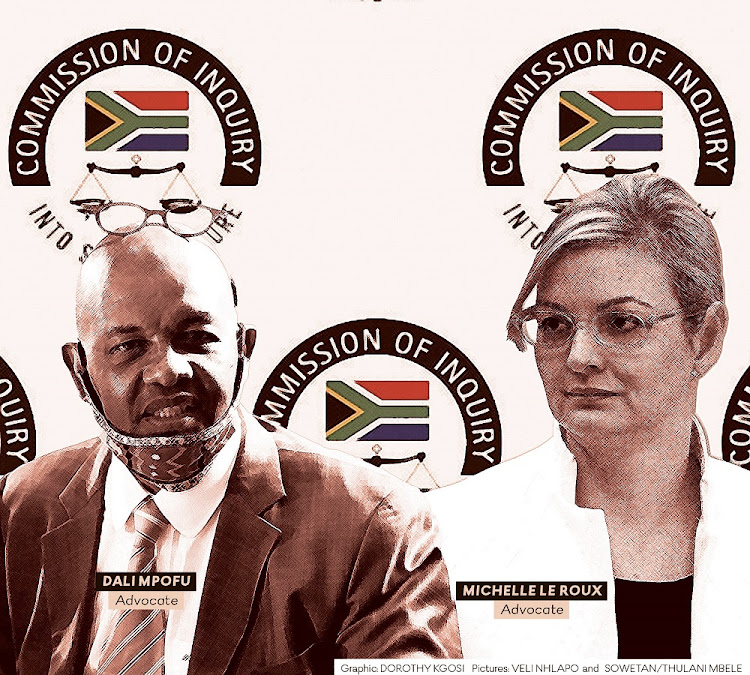 Dali Mpofu’s outrageous outburst in yelling at Michelle le Roux to “shut up” during the hearing of the state capture commission on March 23 would be egregious enough were it merely directed at his opposing counsel.

But the significance of his antics, and that of some other lawyers who have appeared before the commission, evinces a disregard for the Zondo commission itself and the broader judicial system. A judicial commission of inquiry is a creature of the constitution, appointed by the president in terms of powers granted by the constitution. It demands the same respect as the courts.

That the issues being investigated by the commission are the subject of political contestation outside that process, does not permit the legal representatives of witnesses, especially those who have been implicated, to abuse the proceedings to further these political narratives.

The political attacks on the commission and the personal integrity of the deputy chief justice are predicated on fake news and untruths. Strong evidence has emerged of the complicity of key individuals in facilitating the looting of state resources.

Despite the sometimes ponderous proceedings the commission, it is laying bare for the public the scale and extent of state capture and how organs of state were subjugated. The culprits are being unveiled, and are fighting back, desperately.

We have seen unprovoked attacks on justices of the Constitutional Court accusing them of accepting bribes, abandoning their robes for political expediency, all without a shred of evidence.

This is nothing more than an assault on the foundations of our constitutional system, with the integrity and independence of the judiciary in the firing line. It is part of an orchestrated offensive to neutralise the judiciary by those who are implicated and may face criminal charges for their misdemeanours, and those facing such charges.

It is part of an orchestrated offensive to neutralise the judiciary by those who are implicated and may face criminal charges for their misdemeanours, and those facing such charges

Portraying the judiciary as being associated with a factional agenda feeds a populist narrative that is self-serving and destructive of a building block of our constitutional order.

Those who have undermined the work of the commission, and others who have flatly refused to co-operate, will no doubt be among the first to run to the courts they now lambaste to challenge the findings that Zondo may make in his report and to interdict the implementation of its recommendations. They are now merely preparing the ground for this next line of attack.

Mpofu’s attack was pointed, deliberately derogatory and demeaning, particularly as Mpofu added that Le Roux is merely a junior counsel. That Le Roux has been recommended for senior counsel status is neither here nor there — she is a colleague who represents a client and is an equal of Mpofu in that hearing. Bar council rules nowhere state that junior counsel must be subservient to silks, as much as Mpofu would like to benefit from such deference.

Lawyers are sometimes combative in their legal exchanges, but this should never stoop to vulgar insults. The incident is worsened by the fact that Le Roux is a woman — would Mpofu have used such offensive language to a man? Was he not really saying that no woman could be his equal, and that his masculinity must prevail?

Mpofu sought to belittle the authority of the deputy chief justice and had to be reminded that Zondo is the one who calls the shots. But this is not only about Mpofu. We have seen advocates Sikhakhane and Masuku stage a choreographed walkout from the commission with their client, former president Jacob Zuma in November, and challenge Zondo, that if Zuma were to be forced to come back to the commission, he would sit there and not answer any questions.

This is nothing less than showing contempt for the commission, and undermining its dignity and decorum. Then last month, on the day that Zuma had been summoned to appear before the commission, his attorney, Eric Mabuza, wrote to it, saying his client would not heed the summons because it was irregular. Mabuza knows full well that if he wishes to challenge the legality of the summons there are processes to be followed. Neither he nor his client can make that determination.

On Thursday afternoon Zondo made a statement regarding Mpofu’s behaviour, describing his conduct as “unacceptable”. Mpofu was duly reprimanded and Zondo made clear that no such behaviour from lawyers appearing before him would be tolerated in future.

However, one wonders why Zondo stopped short of referring Mpofu’s misconduct to the general council of the bar and the Legal Practice Council. These professional bodies have the responsibility to regulate the conduct of their members and can and should hold them to the high professional ethics of a noble occupation.

It was entirely predictable that, rather than acknowledging the gravity of his transgression and accepting the reprimand from Zondo, Mpofu took to Twitter to cry “racism”. While for Samuel Johnson patriotism may have been the last refuge of the scoundrel, hiding behind false claims of “racism” appears to be the first port of call for naked populists.

Counsel appear in cases to advance the interests of their clients by advocating legal propositions and factual evidence. They are expected to do so according to professional standards of conduct, taking any personal animosity between the litigants out of the equation. They represent their clients but are also “officers of the court” to assist the court or tribunal. Theirs is not to escalate the tensions, and not to pursue their clients’ political agendas.

• Lawson Naidoo is the executive secretary of the Council for the Advancement of the SA Constitution.

There are no legal or structural impediments standing in parliament’s way — it is simply that the ANC has used its power to block any meaningful ...
Opinion
2 months ago

Lacking rationality, the government errs on the side of arrogance