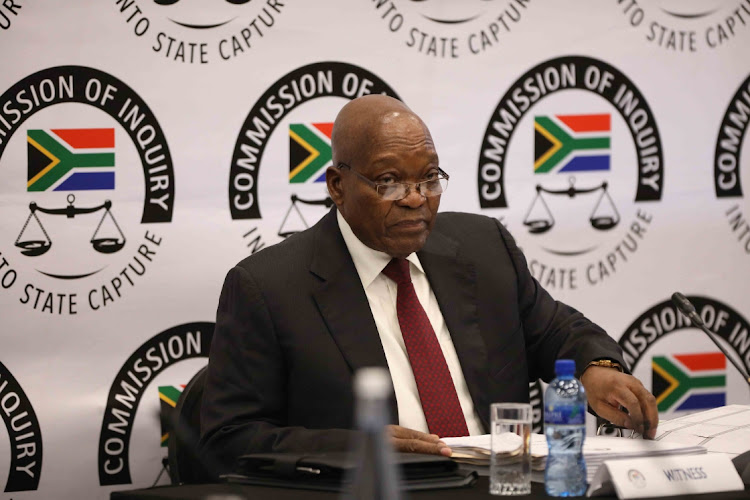 Former president Jacob Zuma on his third day before the commission of inquiry into allegations of state capture on July 17 2019. Picture: SOWETAN/THULANI MBELE

After every election, public representatives proclaim, by taking an oath of office or through solemn affirmation, that they “will obey, respect and uphold the constitution and other laws of the republic”. They also promise solemnly to carry out their duties as members of the legislature to the best of their abilities.

The oath of office or solemn affirmation of every president also includes the above-mentioned, but then the president further undertakes that he or she “will promote what is to the benefit of the republic and oppose all that may harm the republic”, and that he or she will “protect and promote the rights of all South Africans”.

It is therefore the firm undertaking of all elected public representatives, whether their surname is Zuma, Malema, Smith or Van der Merwe, but particularly so if you are a former president. Your country should be your priority.

During an ANC electoral conference in November 2015 Jacob Zuma was quoted widely in the media as saying: “I argued one time with someone who said the country comes first and I said as much as I understand that I think my organisation, the ANC, comes first”. At that stage Zuma was still firmly in the saddle as president of SA.

It is therefore striking that commentators and public opinion are now suddenly complaining that Zuma’s refusal to comply with a summons to appear before the Zondo commission of inquiry into allegations of state capture, as well as Ace Magashule’s comments in defence of Zuma, are unconstitutional. Just as strange are the cavalcades of visitors from various political parties, as well as the minister of police, who have gone to Nkandla to negotiate with this serial constitutional offender.

Yet Zuma is not alone in this view. Deputy transport minister Dikeledi Magadzi said in defence of the ANC before the Zondo commission on February 8 that “If I perish, then so be it — but the ANC comes first and everything else follows.” She said this in defence of the party line always being followed when there is a vote on an issue in parliament. On the basis of the viewpoint that she follows, and probably most ANC members, the ANC is considered above and beyond “the constitution and the other laws of the republic” that she and others solemnly undertook to “obey, respect and uphold”. In this way the constitution is being undermined, a slap in the face of every South African who does try to maintain our constitutional democracy.

The behaviour of Zuma, Magashule and Magadzi is not strange. Through its hold on government the ANC has in the past decade or more created an SA that is characterised by a party that:

Zuma’s viewpoint in 2015 — that the ANC should be put first — should have raised eyebrows then, and the ANC should have acted against him immediately. Through this statement Zuma confirmed that he was not worthy of the office of president of the country. Through its silent condonation of Zuma’s action and pronouncement the governing party has acted as a hanger-on and contributed to the further erosion of the SA constitution, its values and provisions over the past few years.

The Zondo commission not only has brought to light this unbridled state capture, but it has become clear that the ANC and its members have used the state and all its structures in its internal political battles. Because the ANC puts its ideology first, far above the constitution and the political order, it has opened the door for many iniquities. Transformation within the objectives of the “national democratic revolution” has been elevated above constitutional values. State capture has been enabled instead of a state with sufficient capacity, and corruption has become the norm over resources to develop people. In this way, eyes have been closed to everything that has happened in the name of transformation.

The question is whether SA can afford the ANC for much longer. Zuma’s view that the ANC must be put first above the country and its constitution, has already drawn a line in the sand. The ANC and its leadership will have to prove the opposite through visible action. The ANC has previously held that the party makes its decisions collectively and takes collective responsibility. Therefore, it needs to accept collective blame for the undermining of our political order. This applies to the ANC in all its structures, representatives and leadership who continue to place the ANC first through their condonation of this reckless point of view.

The faction fights raging in the ANC have and will continue to cause enormous damage to the country and its people, its minorities and its fragile economy. However, it can be countered through a balanced middle ground of like-minded people who use the constitution as a blueprint from which the full potential of SA can be unlocked in the best interests of its population. We believe most South Africans support the constitutional value system, which is directly in conflict with corruption, state capture and mismanagement as is flourishing under the ANC.

Nation-building and reconciliation require active participants, but the functioning and level thereof are determined by the governing party. The ANC is now facing a crossroad and needs to choose: does it want to promote an inclusive SA in name only, but implement a racially obsessed society? Does it want to increasingly manage SA society so a select, elite group is the only beneficiary and the majority remain spectators? Will the government accept the constitution and all its provisions and the rights arising from these and apply them consistently — including to itself and its members?

Through state capture and the undermining of established structures the ANC has succeeded in elevating Luthuli House and the activities in the dark passages of the ANC head office above the Union Buildings and the chambers of parliament. Maybe the time has come to start reflecting seriously on our electoral system and the list system that raises the party as employer above the norms and expectations of the constitution.

• Bosman is chief secretary of the Afrikanerbond.

For the irretrievably compromised, the judgment will be a welcome political battering ram against the anticorruption agenda of President Cyril ...
Opinion
6 months ago