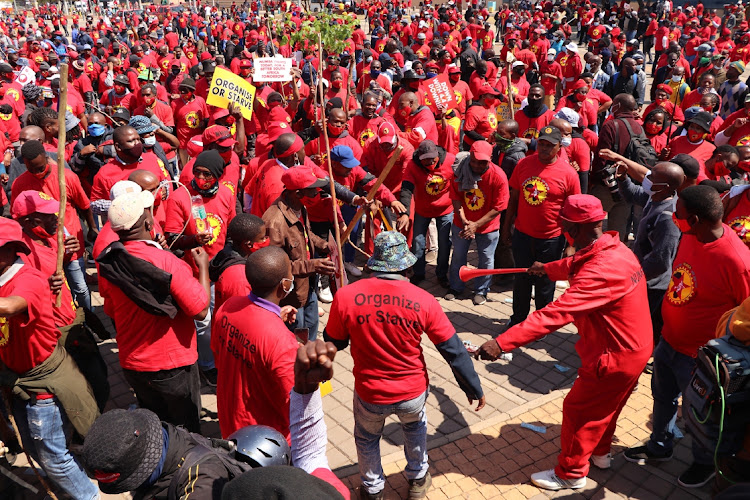 The National Union of Metalworkers of SA (Numsa) said while it is still committed to break a wage deadlock in the motor sector, its readying members ahead of what’s “seemingly going to be a national strike” after parties could not find each other after two days of talks.

“We have not found each other. Numsa is unfortunately headed for a strike, the reason ... is that the offer that we received from the FRA (Fuel Retailers Association) is an offer which we cannot accept,” Numsa spokesperson Phakamile Hlubi-Majola told Business Day.

“They offered 4% across the board for forecourt attendants and they offered 3% for cleaners and 3% for cashiers, and this is for the entire duration of the three-year [term]. Their proposal is based on the condition that Numsa must drop all other demands. This is not something that we can accept given that these are some of the lowest-paid workers. A cleaner earns R21 an hour.”

Hlubi-Majola said the union, which is demanding a 12% wage increase, had hoped the FRA and Retail Motor Industry Organisation (RMI) “would meet us at the point of inflation. We cannot accept the offer from FRA. The RMI did not even make an offer”.

The Reserve Bank has forecast a headline inflation rate of 6.5% for 2022.

The parties held crunch talks at the Motor Industries Bargaining Council’s (Mibco) Dispute Resolution Centre (DRC) on Tuesday and Wednesday in an effort to break the wage deadlock lodged by Numsa recently, after three rounds of talks failed to reach consensus.

Hlubi-Majola said the union was now waiting for the Commission for Conciliation, Mediation and Arbitration (CCMA) to “give us a date for conciliation”.

“We urge employers to come back to the table; they must put something meaningful on the table.”

But the Mibco DRC is accredited by the CCMA to resolve most labour disputes and its procedures “closely mirror those of the CCMA”.

Hlubi-Majola said: “We are going to the CCMA because the DRC wanted to extend mediation to August 23. We rejected the proposal. We feel they are dragging things out unnecessarily.”

She said in the meantime, Numsa would be organising shop-steward council meetings to mobile workers “ahead of what is seemingly going to be a national strike in the motor sector”.

The union, the biggest in the country with over 400,000 members across various sectors including construction, energy, and steel and manufacturing, would continue to avail itself for talks with employers in an effort to find common ground. “We urge employers to come back to the table; they must put something meaningful on the table”.

FRA CEO Reggie Sibiya said because the matter was now going to the CCMA, they would not be commenting yet.

RMI chief negotiator Jacques Viljoen told Business Day on Tuesday that the RMI places a high premium on “labour stability and industry peace, and as a consequence, takes the negotiation process extremely seriously”.

“At present, much time is spent on identifying ... core non-wage demands from the trade unions and once this has been dealt with, focus will turn to wage increases across the various subsectors in the industry.

“Progress is anticipated to increase over the next few weeks in the hope that a new wage and substantive agreement is published by the department of employment & labour as soon as possible after August 31 2022, when all the current collective agreements expire.”

The motor sector represents employees in components manufacturing companies, fuel stations, car dealerships, car cleaning and auto-spare assembly and panel-beating workshops, and employs about 306,000 workers nationally, of which about 90,000 are Numsa members.

Numsa general secretary Irvin Jim says workers are demanding a double-digit increase, but ‘negotiations are give and take’
National
3 weeks ago
Next Article