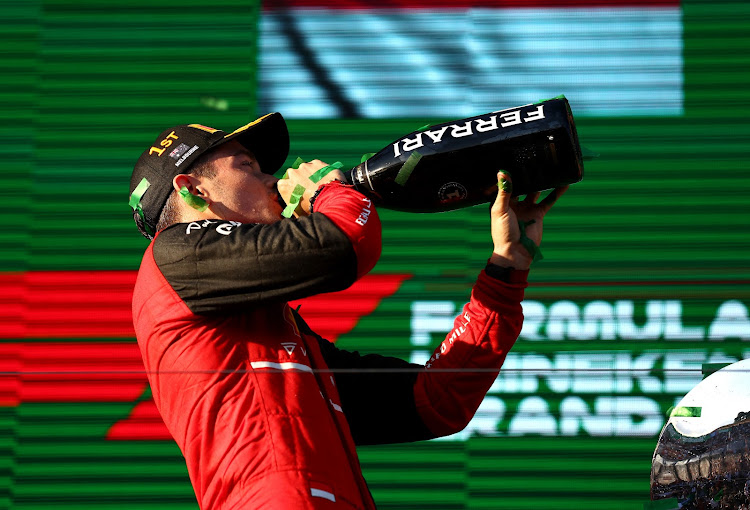 Ferrari is tasting the bubbly again after last winning the F1 title in 2007. Picture: REUTERS

Ferrari fans know all about false dawns and dashed hopes but the first three races of the Formula One season have brought the good times back to Maranello and sent expectations soaring.

Charles Leclerc, seeking to become the Italian team’s first world champion since Kimi Raikkonen in 2007, has taken 71 of 78 points available from the opening races in Bahrain, Saudi Arabia and Australia.

“Obviously we only had the third race, so it’s difficult to think about the championship, but to be honest, we’ve got a very strong car, a very reliable car too,” Leclerc told reporters in Melbourne at the weekend.

“I hope it continues like this and if it does, then we probably have chances for the championship, which obviously makes me smile after the last two years that have been difficult for the team and for myself.”

Ferrari, who dominated with seven times champion Michael Schumacher in the early years of the century, failed to win a race in 2020 when they slumped to a 40-year low of sixth overall.

In 2021 they clawed their way back to third place while Mercedes celebrated a record eighth successive constructors’ crowns.

This season, with a rules overhaul, the sport’s oldest and most glamorous team have come out stronger than in any year since 2017, when Sebastian Vettel also won two of the first three races and finished second in the other.

Vettel, a four times champion with Red Bull from 2010-2013, also won two of the opening three in 2018 but failed to maintain the momentum as Ferrari’s challenge fizzled out.

Two times world champion Fernando Alonso also put up a good fight in 2010 and 2012, when the Spaniard was the main man at Ferrari and Vettel's biggest rival.

This time Leclerc has the car to show off his talents, the points gap is ominous and Ferrari’s rivals are sweating to match them on speed and reliability even if there are still 20 races remaining.

In Melbourne, he won from pole and led every lap with a bonus point for fastest lap, his third in three races, for a first career “Grand Slam”.

“We knew we had a competitive car but certainly I was not expecting such a good start to the season,” said team boss Mattia Binotto.

“But I still believe that the difference between us and the others can be very little ... and it will be a great fight in the next races.”

Imola, one of two home Italian races for Ferrari this year, is next up on April 24 and Ferrari can expect strong support from their success-starved fans as they seek to build momentum.

“I don’t know if it will be unstoppable, and each single race will be different, but it's great to be in Imola now with such a good start to the season after a win,” said Binotto.

Dutch driver and Leclerc separated by 0.5 seconds as Hamilton scores final point in 10th
Life
1 month ago
Next Article