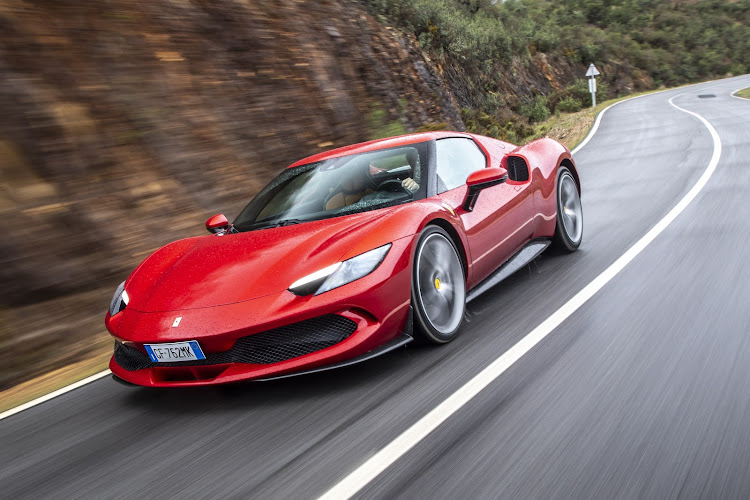 The 296 name refers to the engine’s cubic capacity and number of cylinders. Picture: SUPPLIED

Seville’s sodden roads are the venue for the world launch of the 296 Gran Turismo Berlinetta (GTB), notable for being the first Ferrari-badged road car with a six-cylinder engine instead of an eight- or 12-cylinder power unit.

It is also notable for being a petrol-electric plug-in hybrid, though this is not a first. Ferrari has previously crossed into hybrid land with the LaFerrari in 2013 and the SF90 Stradale plug-in hybrid in 2019.

This mid-engined two-seater’s styling is inspired by the Ferrari 250 LM of the 1960s, and it is a striking thing with its visor-like windscreen and oversized rear air scoops. An active rear spoiler pops up at high speed to improve downforce.

It’s raining hard when the journey starts, so it’s not a case of saddling up and instantly thrashing this prancing horse. Need to tickle it under the chin first to see if it bites. But it is a civilised and approachable thing, not a beast that wants to tear you limb from limb.

It is a car that can be finessed at rapid pace through a slippery mountain pass, though one has to respect all that power going through just the rear wheels; snap oversteer on narrow public roads is not a desired outcome. Later, there will be a chance to test the car on a racetrack and take more chances.

With the car set to Wet mode and with the throttle squeezed rather than bludgeoned when powering through slippery corners, there is so much grip from those bespoke Michelin Pilot Sport 4S tyres. They were specially designed for the 296 GTB and they help the car hunker down and sweep confidently through the slick curves.

The mode switch on the steering wheel, nicknamed “manettino”, allows for the adjustment of the electronics governing suspension settings, traction control, electronic differential, and the eight-speed dual clutch auto transmission. There are also four power modes: eDrive (electric only with a maximum 25km range), Hybrid, Performance (the V6 engine is always on), and Qualify (maximum performance).

It’s too wet for the maxed-out modes, but selecting the medium settings teases extra urgency from the car while still keeping it settled, with the stability control and electronic differential quickly guiding a loose tail back into line.

Apart from all the grip, what sticks out is yielding suspension that doesn’t jitter uncomfortably; teeth fillings are not in danger of shaking loose. The 296 GTB is a surprisingly civil and forgiving sports car, one that you could drive to the shops.

With the electric motor in play and Qualifying mode selected, all 610kW come alive, and the chance to use it comes on day two at the Monteblanco race circuit. The rain has stopped but there are still wet sections that cause the car to squirrel and slide on the track, though the electronics help prevent snap oversteer from overenthusiastic throttle inputs. 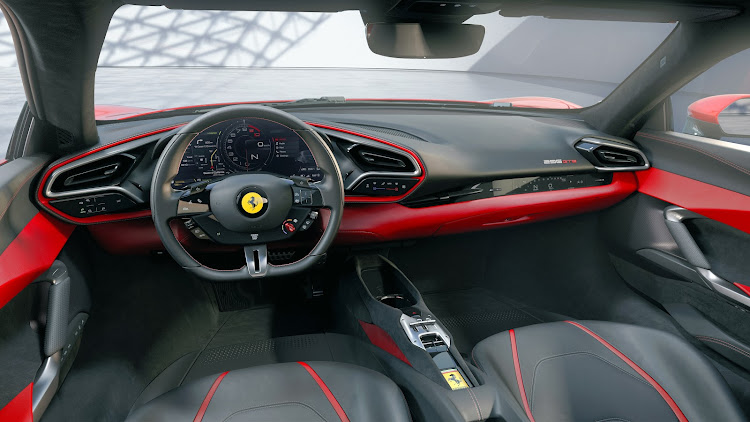 Most controls are mounted on the F1-style steering wheel, including the haptic-touch start-stop button. Picture: SUPPLIED

The car used for the track session is the optional Assetto Fiorano package which is 15kg lighter and has firmer suspension, with semi-slick Michelin Pilot Sport Cup 2R tyres.

On dry parts of the track the 296 GTB’s short wheelbase and lightness come into play. This is no grand tourer but a slick, compact sports car purpose-built for flicking into tight apexes, and late braking. Ah, the pleasures of mid-engined handling, with electronics that keep it pegged to the road without muzzling the driving experience; the engineers have done their homework.

The 296 GTB is a so-called junior car in the Ferrari ranks but its laptimes place it in the executive boardroom. Around Ferrari's home Fiorano circuit it posted a 1min 21sec lap time, even quicker than the F8 Tributo and 812 Superfast. It is just two seconds slower than the prancing horse flagship, the 736kW Ferrari SF90 Stradale.

On Monteblanco’s long straight we finally let loose up to the 8,500rpm redline, evoking an enthralling sound and light show with the 2.9l V6 yelling emotively and F1-style lights on the steering wheel illuminating in sequence to indicate the next gearshift.

The car is available only as an auto, but the H-gate-style gear shifter references old-school manual Ferraris like the one Magnum PI drove. 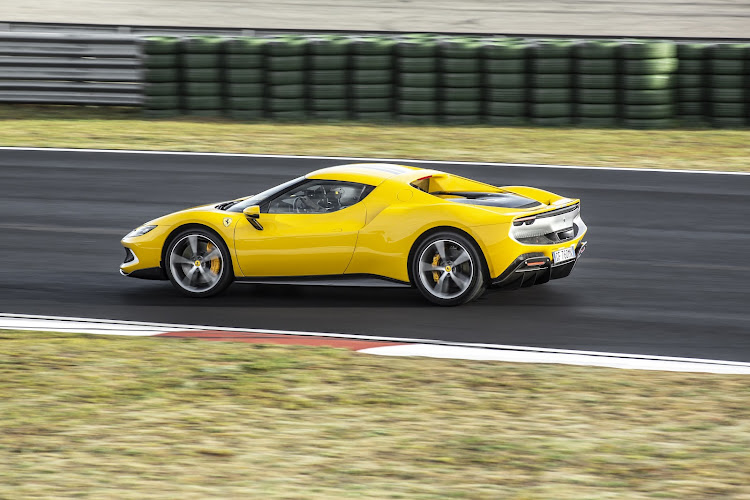 An optional Assetto Fiorano package optimises the 296 GTB for track use. Picture: SUPPLIED

The digitised cockpit has few physical buttons, the mannetino switch on the steering wheel being one of them. Most functions are mounted on the steering wheel instead of the dashboard, and the bulk of them are controlled by haptic touch — very modern if not all that user friendly, as skimming through digital menus can be hit and miss.

It is a small blot in the 296 GTB’s impressive repertoire. The main takeaway is how approachable it is, what you might term an “everyday” sports car if that didn't have negative connotations, as if it isn't exciting. That isn't the case. This Ferrari is not about raw emotion and an uncompromisingly harsh ride; rather it is a thrill ride without feeling like you've gone a few rounds with Conor McGregor.

The 296 GTB will go on sale in SA within the next couple of months at an indicated price of R6.38m.

Driving the Porsche GT3 feels like attacking King’s Landing on a dragon, writes Denis Droppa
Life
4 months ago
Next Article