Conditions for buying of Steinhoff properties have been met, Pepkor says

The retailer said in December subsidiaries Ultimo Properties and JD Electronics had agreed to take over properties and leases for R1.05bn 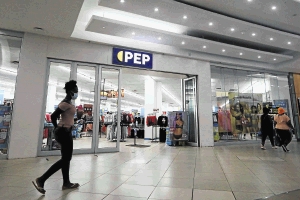 Retailer Pepkor, formerly Steinhoff Africa Retail, says the conditions for the R1.05bn purchase of properties from subsidiaries of its largest shareholder, Steinhoff International, have been met.

Pepkor, the owner of Ackermans and Pep, said in December its wholly-owned subsidiaries JD Electronics and Ultimo Properties, would acquire properties and leases, which would be settled through the issuance of 70-million Pepkor shares. This represents about 1.91% of its share capital before the issuance.

Conditions that needed to be met included approval from competition authorities, as well as consent from Steinhoff's creditors.

The shares would be issued at R15 per share, a 16% premium to the volume-weighted average trading price of Pepkor shares in the 30 days prior to the board approving the transaction.

Pepkor said the transaction would result in operational cost savings, including rental expenses, which amounted to about R111m in its 2020 financial year.

The Pepkor shares will be issued to the relevant Steinhoff subsidiaries in various tranches as and when the respective properties are transferred to the relevant purchaser, Pepkor said on Wednesday. Pepkor will acquire 10 properties, and a half share in another property, and are mostly being used as distribution centres.

One property is being used as a corporate head office, and another as a call centre.

Christo Wiese sold Pepkor to Steinhoff in 2015 in exchange for being the biggest shareholder in that company, although the value of Steinhoff shares subsequently plunged after an accounting scandal broke in 2017.

In 2018, the group changed its name back to Pepkor, while as of Pepkor's 2020 year Steinhoff International held just over two thirds of its shares.

Steinhoff's shares in Pepkor are expected to form part of a settlement agreement as Steinhoff attempts to conclude some of the dozens of lawsuits launched against it in the wake of the accounting scandal.

In morning trade on Wednesday Pepkor's shares were little changed at R15.93, having risen just more than 16.87% so far in 2021. In the same period of time the JSE’s retailers index has risen 4.05%.

Steinhoff International was down 1.46% to R2.08, remaining flat in the year to date. It has lost almost 98% of its value over the past five years.

Retailers pencil in a better February

Retailers pencil in a better February