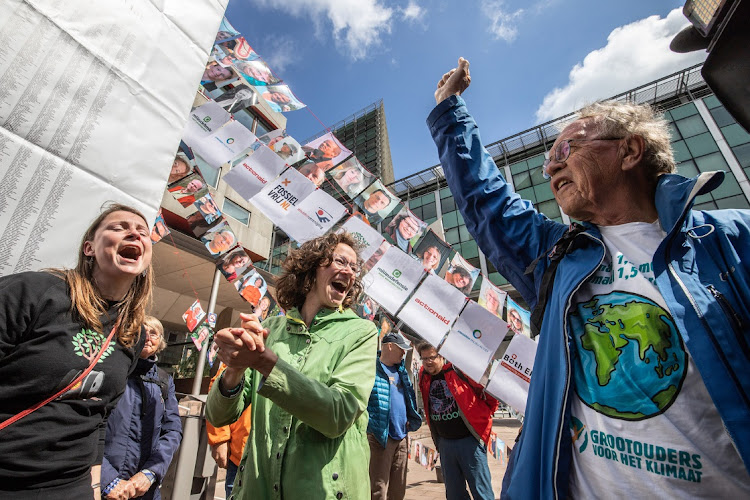 Members of the environmental group MilieuDefensie celebrate the verdict of the Dutch environmental organisation's case against Royal Dutch Shell Plc, outside the Palace of Justice courthouse in The Hague, Netherlands. Picture: BLOOMBERG/PETER BOER

Amsterdam/London — The Dutch wing of environmental group Friends of the Earth, which won a landmark court victory against Royal Dutch Shell in 2021, is targeting 30 major corporate emitters in a campaign launched on Thursday.

Milieudefensie has set its sights on large companies with legal bases in the Netherlands, where a court ruled in May that Shell must reduce its environmental footprint.

The heads of the companies were being sent letters demanding that they provide plans outlining how they will trim emissions by 45% from 2019 levels by 2030, in line with the Paris climate accord. A failure to do so may result in legal action, said Peer de Rijk, policy officer at Milieudefensie.

“We are very clear that in the end, if needed, we are willing to go to court. But of course we are hoping these companies will be moving by themselves,” De Rijk said.

“We are willing to engage in talks, but we are in a hurry as well, so we won’t accept talks for the sake of talks themselves,” he said. “Climate science is very clear. This is exactly what is needed … There is no choice so they will just have to.”

Shell is appealing against The Hague district court order to cut emissions in line with the 2015 Paris agreement.

“You lead an enterprise with control over and influence on a substantial amount of CO2 emissions. An enterprise that can and must contribute to the system change necessary to prevent dangerous climate change,” a draft letter seen by Reuters said, asking: “Are you a front-runner or a straggler?”

Some of the businesses are “small in the Netherlands itself, but they have a very large, international, global impact and the Shell verdict very clearly states that it is … possible to hold them accountable for their global emissions via the Dutch law”, he said.

The move by Milieudefensie follows a commitment by countries to accelerate their emissions reductions at the COP26 climate talks in Glasgow in November, with investors managing $130-trillion in assets signing up to net zero and pressuring companies to ensure their plans are good enough.

The broadening of Milieudefensie’s campaign also comes against a backdrop of increased climate-related litigation globally, with more than 1,000 cases brought since 2015, research from the London School of Economics showed.

Milieudefensie, which said it had been approached by scores of concerned companies after the Shell verdict, set a three-month deadline until April 15 for the companies to present a climate plan.

They will be used to set an emissions baseline against which the companies’ progress in cutting climate-heating gases can be measured, the group said.

KLM said while it could not comment in detail until it had formally received the letter, it has committed to aligning its net-zero pathway with climate science, and planned to use more sustainable aviation fuel.

An ABN spokesperson said the bank supported efforts to limit global warming and was working to reduce emissions from its lending, including by encouraging homeowners to improve the energy efficiency of their homes and increasing its lending for renewable energy.

An Ahold spokesperson was not immediately available to comment.

In addition to targeting companies, Milieudefensie also called on the government in the Netherlands to enshrine the Paris accord in Dutch law to ensure corporate compliance.