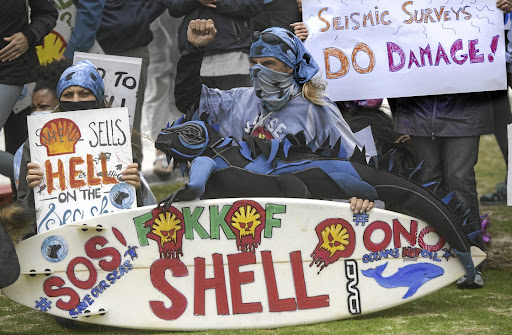 SA faces a smorgasbord of past, present and imminent environmental disasters, but this is the first that has spurred widespread public anger. Shell’s blasting operation in an exploration area it shares with Impact Oil & Gas, a subsidiary of JSE-listed Hosken Consolidated Investments, has sparked petitions, boycotts and protests across SA.

Makhanda high court acting judge Avinash Govindjee was unmoved, dismissing the application with costs — so the environmental groups, which brought the case in the public interest, must pay Shell’s legal fees.

Govindjee gave a brief nod to "growing global concern about the environment", but was more anxious to protect Shell’s contractual obligations and expenditure incurred, and unconvinced by what he described as the "paucity of information on the likely environmental harm". The marine scientists who wrote an open letter to the government last week, emphasising the "growing body of evidence" on the harmful impacts of seismic surveys, would disagree.

But even if the judge were right on this point, there is an established legal principle he failed to consider.

The precautionary principle holds that "a risk-averse and cautious approach must be applied" in cases of uncertainty. It means projects should not go ahead, according to the Constitutional Court in the Fuel Retailers case, "where, due to unavailable scientific knowledge, there is uncertainty as to the future impact of the proposed development".

Sadly, the principle is rarely applied. This small triumph for Shell, a powerful corporation with a long history of environmental devastation in Africa, is testament to the extent to which economic, legal and political systems have been skewed towards protecting commercial interests.

The dissembling way Shell and its lawyers claim surveying will be well regulated and the effects appropriately mitigated, is staggering. These are the same people who regularly complain that SA’s regulatory regime is a shambles. They are right.

A decade after amendments to upstream oil and gas legislation were proposed, there is no clarity on planned changes to the tax regime or local content rules. Environmental regulations for offshore activities are utterly inadequate, while the Petroleum Agency SA, responsible for regulating the sector, has been cheering on Shell’s plans from the sidelines.

Shell’s expressed rationale for the project — that it will help to alleviate SA’s energy crisis and drive economic growth — is nonsense. The same claims and inflated expectations have been on display for over a decade in Mozambique, where the push for gas has had devastating consequences.

A lesson from Mozambique

The International Monetary Fund predicted in 2016 that, assuming production and export of Mozambican liquefied natural gas started in 2021, the "average real GDP growth rate between 2021 and 2025 could reach 24%". Project proponents claimed gas would "catapult Mozambique to a middle-income country".

But as a December 2021 report by independent think-tank E3G notes, Mozambicans are now on average poorer than they were a decade ago. Revenues from gas are predicted to be half of what the energy ministry claims — if they materialise at all. The focus on gas has diverted attention and resources from investment in renewable energy, for which Mozambique has some of the highest potential in the world.

To compound all this, as pressure to act on climate change intensifies, many of the governments and public finance institutions that pushed for gas development are quietly stepping away, leaving Mozambique with a truckload of probably stranded assets, and no resources to support an alternative pathway to development.

SA shares many of the characteristics that underpin Mozambique’s plight: huge indebtedness; an economy dominated by patronage, corruption and rent-seeking; and millions of people in poverty who will understandably clutch at any straw.

This is the most unconscionable of the claims made by Shell and its acolytes: the assertion that they aim to contribute to a better life for all, rather than just a better life for their executives, shareholders and advisers. We’ve seen how this plays out, over and over. Are we really going to let it happen again here?

Stage 6 load-shedding back on Monday

BUSISIWE MAVUSO: Government may finally have seen the ...