The industry is battling to keep up with risks posed by snowstorms, hail, tornados and wildfire 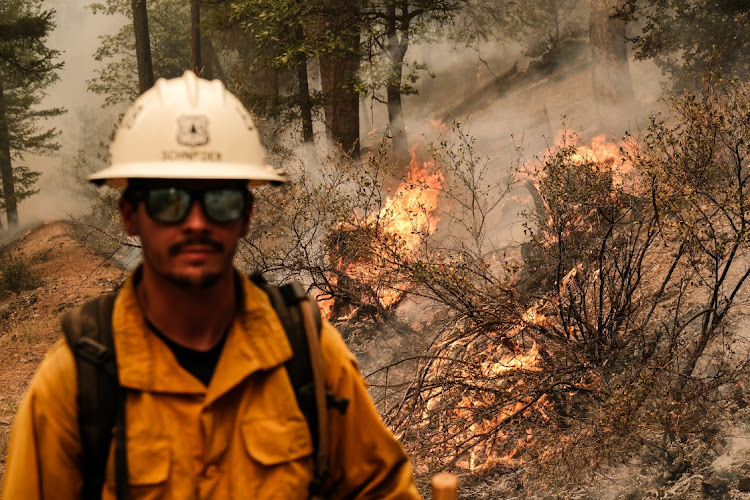 A firefighter monitors a control burn to prevent the fire line from reaching structures on North Arm Road during the Dixie Fire near Taylorsville, California, US, on August 15 2021. Picture: BLOOMBERG/DAVID ODISHO

If you are having trouble wrapping your mind around the spree of natural catastrophes currently plaguing the world — from deadly July floods in Germany and China to the wildfires still burning in Greece, California and Siberia — you may be interested to know the professional risk calculators are too.

Climate change is worsening extreme and freak weather events so rapidly that even the insurance industry is struggling to keep up.

Late last week, reinsurance giant Swiss Re released its midyear insurance losses and the figures were the second-highest on record. Insurers had to cover $40bn in losses caused by natural catastrophes. The previous ten-year average for the first half of the year is $33bn.

The insurance losses increased even though total economic losses from the natural disasters that they were based on actually decreased to $74bn, down 31% from the year before.

Martin Bertogg, head of catastrophic perils at Swiss Re, said that the industry has been challenged by what is known as “secondary perils”.  That is, while the insurance industry historically has done a good job of modelling relatively rare but potentially devastating events such as earthquakes and hurricanes, it is battling to keep up with risks posed by snowstorms, hail, tornados and wildfire.

These used to cause relatively minor damage but are increasingly morphing into something more costly. And that is a problem for companies in the US especially, since many Americans have coverage for such events.

Winter Storm Uri, which pounded Texas in February with snow and subfreezing temperatures, is a good example. Uri caused $15bn in losses, making it the largest loss from a winter event in US history, Swiss Re said.

While the jury is still out on whether climate change is directly to blame for Uri — the idea that warming makes the polar vortex unstable is not conclusive — the safest bet when the climate is changing is that weird things are going to happen a lot more. Severe weather including hail and tornadoes in Central Europe in June accounted for about $4.5bn in losses and have been linked to climate change.

Swiss Re thinks that this type of event is a trend it needs to get on top of. “The insurance industry needs to upscale its risk assessment capabilities for these lesser monitored perils to maintain and expand its contribution to financial resilience,” Bertogg said in its report on the losses.

Of course, that is easier said than done, Erdem Karaca, who oversees catastrophic perils in the Americas for Swiss Re, responded. “Models are less mature for secondary perils,” he said, “a peril like wildfire is also impacted by humans — 90% of ignitions are caused by humans so it is difficult to quantify through models.”

Still, the industry is determined to get better. Over recent years modellers have gotten much more sophisticated at predicting flood risk, Karaca said. In the US, more sophisticated flood modelling has caused the Federal Emergency Management Agency, which handles 95% of residential flood insurance, to initiate its first new flood-rate model in 50 years. Private insurance companies are also racing to deploy better models for fire prediction.

For many people, better information will translate into higher premiums.

In the meantime, catastrophic weather keeps coming. Those losses from Germany’s floods are not counted in this recent report, which covered January through June. They could be as much as $6.5bn, Swiss Re estimated. And hurricane season has hardly hit its peak; in the northern hemisphere that comes in the third quarter of the year.

Tropical Storm Fred, which is passing over the Florida Panhandle, is expected to do comparatively little damage. But Grace and other storms are on their way, and losses are sure to mount.

STEPHEN CRANSTON: Insurers — callous in a time of need

STEPHEN CRANSTON: Insurers — callous in a time of need