Destruction amounted to an estimated R500m, apart from loss of income 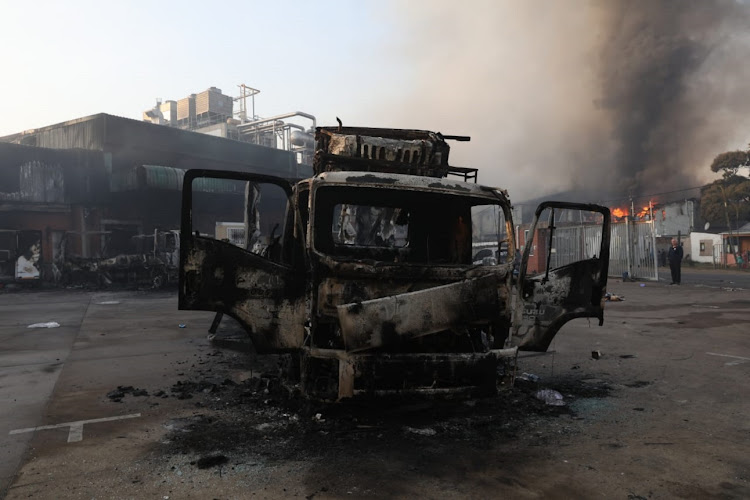 About 250 trucks were destroyed during the protests. Picture: GALLO IMAGES

About R24bn in cargo could not be moved while the N3 was closed for eight days during July’s riots in KwaZulu-Natal and Gauteng, says the Road Freight Association (RFA).

About 6,000 trucks move along the N3 daily, transporting R3bn in cargo.

“When the total supply chain is affected, the economic effects are far reaching, from short to long term.”

About 250 trucks were destroyed during the protests, amounting to an estimated R500m loss in assets and cargo, while operators suffered loss of income due to their inability to operate.

“We found that many of our SMME [small, medium and micro enterprises] members, which form 88% of the operator membership category of the RFA, are under severe financial pressure as they have not been able to generate revenue due to the disruptions.

“There are instances where small businesses have lost their only truck, or trucks. This means loss of earnings for the business, and loss of salaries paid to staff.”

He said the unrest could lead to some operators choosing to move cargo through neighbouring countries.

“This has already been happening as SA ports become inefficient and the surrounding ports develop, improve and drive efficiencies up. SA’s ‘gateway to Africa’ status has been lost and these attacks will further cement the move of transit freight from SA to neighbouring countries. Port revenues will drop, as will income through all support and related freight logistics users.”

Business had not returned to normal as some facilities were still under repair and alternative arrangements needed to be made, said Kelly, adding there were still jitters about security and possible attacks.

The RFA is calling on the government to make available seed and reconstruction funding for those SMME companies devastated through asset loss or inability to deliver due to the unrest.

It says the department of employment & labour should support employees who are affected by losses and damages to the logistics chains for at least a year to allow companies to get back on to a stable financial footing.

It also calls for a moratorium on levies during the process of reconstruction; alternatively, if the levies stay in place, companies should be able to claim against these for expenses related to rebuilding.

Some companies have increased or added security to their operations but that is unsustainable unless the costing of this is fed through to the customer, said Kelly.

“Transporters are taking the necessary steps to reduce risk and increase security, some of which is using SAPS escorts where available.”

Kelly said the cost of the riots to the economy would run into billions of rand as business confidence from foreign investors plummeted, and those who used SA as a transit hub shunned the country to move to other countries that were safer and more efficient.

Costs relating to insurance would increase too, as the risk to insurers had increased over the last three years, partly due to the constant attacks on freight.

“Government needs to ensure proper policing resources and processes are in place to deal with the criminal threat and thereafter to ensure prosecution is followed through and those convicted of crimes pay a relevant penalty for such acts,” said Kelly.

Spotlight on the security of SA’s fuel supply

AYABONGA CAWE: SA has opted for peace and to build, but it is far from over

Spotlight on the security of SA’s fuel supply

AYABONGA CAWE: SA has opted for peace and to build, but it is far from over