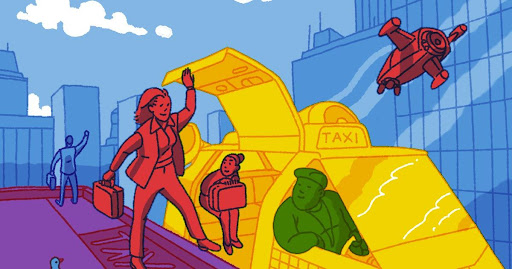 Start-ups around the globe are in the final stage of developing and refining the technology behind what the industry calls eVTOLs, or electric vertical take-off and landing aircraft. These flying taxis are battery-powered and, the companies say, destined to fly without a pilot — once regulations allow.

Billions of dollars flowed into the sector in 2021, as well as an impressive number of orders, mostly from commercial airlines. The next 18 months will be pivotal for the fledgling industry, as manufacturers run vital test flights and finalise plans for so-called vertiports and regulators consider how best to guarantee safety.

Nowhere has the prospect of the electric air taxi been greeted as eagerly as in airline boardrooms. Even as the travel industry fights to survive the coronavirus crisis, the world’s leading carriers have been embracing the promise of eVTOLs, placing tentative orders for more than 1,500 of the craft in the past two years.

Vertical Aerospace has deals with American Airlines, Japan Airlines and Virgin Atlantic to introduce services by 2025. Archer Aviation is sitting on a mammoth order from United Airlines. These and other manufacturers will spend the next year and a half running test flights and seeking regulatory approval so they can turn provisional orders into completed sales.

The carriers see the craft as the ideal means of transporting rich travellers and corporate passengers to and from the airport, loosening the grip of the car, train, and taxicab on drop-offs while improving the customer experience. “It’s all about the first and last 100 miles,” says Shai Weiss, CEO of Virgin Atlantic Airways. “You can spend hours on relatively short airport journeys by public transport or sit in a traffic jam. EVTOLs can do the trip in 30 minutes, and people will pay a premium for that.”

Though Virgin has yet to decide on a pricing structure, Weiss says initial research suggests travellers may be willing to spend twice their usual budget for airport commutes if they know that the trip will be short and comfortable and that they’re guaranteed to arrive on time. Even at twice the cost of a taxi, eVTOLs would still be cheaper than helicopters — plus much quieter and free of carbon emissions.

Virgin Atlantic has options to buy as many as 150 of Vertical Aerospace’s VX4 craft, designed to carry four passengers plus a pilot more than 160km at speeds approaching 322km/h. The start-up is set to make its first flight in 2022.

Weiss says the concept is especially well-suited to Virgin, which draws most of its passengers from relatively small areas around London and Manchester, within the VX4’s range.

Other airlines have ordered flying taxis to address specific needs. Brazil’s Gol Linhas Aéreas Inteligentes agreed in September to buy or rent as many as 250 VX4s from leasing company Avolon Holdings, which is acting as an intermediary between Vertical and several of its customers. The deal could help transform travel in São Paulo, which has become the world’s busiest city for helicopter flights because traffic snarl-ups typically block hundreds of kilometres of road.

When you’ve got the technology and money, you’re going to get somewhere and I think the airlines have seen that

Japan Airlines’s deal for 100 VX4s is linked to plans to serve the 2025 World Expo, the carrier has said. There are also plans to operate flying taxis in Tokyo to exploit the world’s largest concentration of helipads. The landing sites, which were built as part of the city’s earthquake-evacuation preparations, have been underused because of local restrictions on helicopter flights.

The fleets of wholly electric, zero-carbon craft will also serve to burnish carriers’ green credentials as they struggle to keep pace with emissions reductions in sectors where the laws of physics pose less of a hurdle. “Airlines know that they have to be seen to shift towards net-zero, and electrification of these short hops is a step in that direction,” says Andrew Macmillan, Vertical Aerospace’s infrastructure director.

A 160-page study published by the EU Aviation Safety Agency in May suggested eVTOLs could become a reality as early as 2024. It found that even though people are generally positive about them, they have some concerns mainly around safety but also about noise, the impact on wildlife, and whether the craft could pose a security risk.

Even so, flying taxis have become a viable prospect faster than previously envisaged even within the eVTOL community, Macmillan says, spurred by advances in battery, electric motor, and composites technology as well as a surge of funding from whom he calls “serious people with serious money.”

Investment is up thirtyfold since 2019, with $6.5bn flowing to eVTOL manufacturers and infrastructure planners after a spate of stock market listings and the sale of holdings to financiers and industrial partners. Vertical, which is based in Bristol, England, and trades in New York, counts American Airlines, Avolon, Honeywell International, Microsoft and Rolls-Royce among its backers.

“When you’ve got the technology and money, you’re going to get somewhere,” Macmillan says, “and I think the airlines have seen that.” Plus, he says, airlines’ experience operating complex aerial networks will help to dispel many of the safety concerns about flying taxis among the travelling public.

Virgin’s Weiss says eVTOLs are a much stronger bet than other fledgling technologies such as hydrogen propulsion. “They may not be exactly on time, and their costs may be higher in the beginning,” he says. “But it’s now more likely than not that they’re going to succeed.”

Bloomberg News, More stories like this are available on bloomberg.com

While none are yet certified for commercial use, Europe's top aviation regulator expects approvals for electric flying taxis in 2024
Business
11 months ago
Next Article