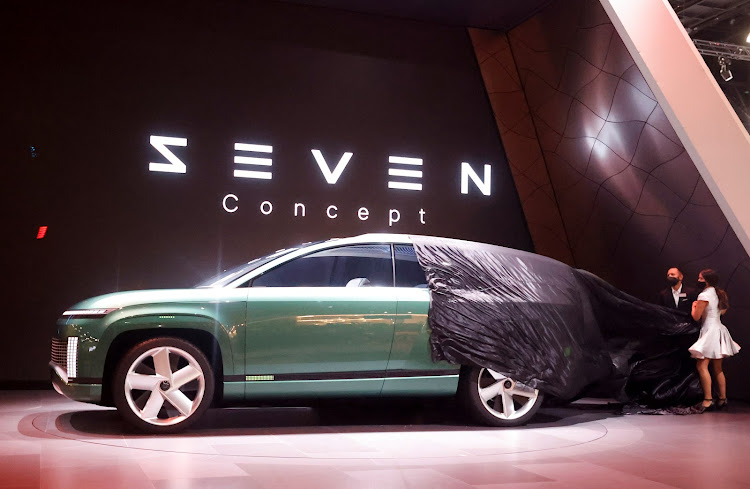 Hyundai's futuristic Seven Concept electric SUV is unveiled at the 2021 LA Auto Show in the US. Picture: REUTERS

What a difference two years make. The 2019 Los Angeles auto show featured a parade of vehicle debuts, a flurry of press conferences and other events in the opening two days, along with hundreds of thousands of people eager to see new cars.

Fast forward to 2021, with Los Angeles the first major US auto show since the start of the Covid-19 pandemic. The Los Angeles Auto Show kicked off on Wednesday with a single day of press events, and while crowds are expected, they are likely to be much smaller, and some automakers are even skipping the show.

The show illustrates how the pandemic has accelerated automakers’ shift towards the online world, as consumers buy more vehicles on the internet.

Honda and BMW both skipped the show in favour of separate, earlier events. Honda showed off a reincarnation of its iconic Integra prototype sedan.

“That was an event that was exclusively ours. We find that we don’t have to compete like you do on the press days of an auto show to get the attention,” Honda executive vice-president Dave Gardner told Reuters on a Zoom interview.

“The pandemic has taught us that we can work differently ... There will be auto shows still in the future, but there’ll be also different types of presentations,” Karim Habib, head of Kia Design Center, told Reuters at the show.

Kia and affiliate Hyundai were among the few automakers that debuted electric SUV concepts at the show, showcasing their large sport electric vehicles, and flying in executives, including CEOs, from their Seoul headquarters to Los Angeles.

“Auto shows used to be very, very popular for automakers to make a big media splash. That has changed with social media and with other forms of access to the media by consumers,” Brett Smith, technology director at Center for Automotive Research, said. “I think the pandemic was maybe the last straw in this.”

The LA Auto Show will open to the public for 10 days starting on Friday.

“The online reservations have not been as strong as 2019, but strong enough that we believe we’re going to have a great year,” David Fortin, head of consumer marketing at Los Angeles Auto Show, told Reuters. “There’s still no way, I think, to capture that kind of moment outside an auto show.”

Smaller companies see a positive side to the changes.

“I don’t mind if somebody doesn’t show up here. It gives more attention to us,” Henrik Fisker, CEO of electric vehicle start-up Fisker, told Reuters.

He said his Ocean SUV is a “sexy sports car” best seen in person. “I know I’m zoomed out. I don’t think I enjoy any more sitting just looking at computers and pictures. I want to see the real stuff,” Fisker said.

Munich takes over from Frankfurt as host of German motor show