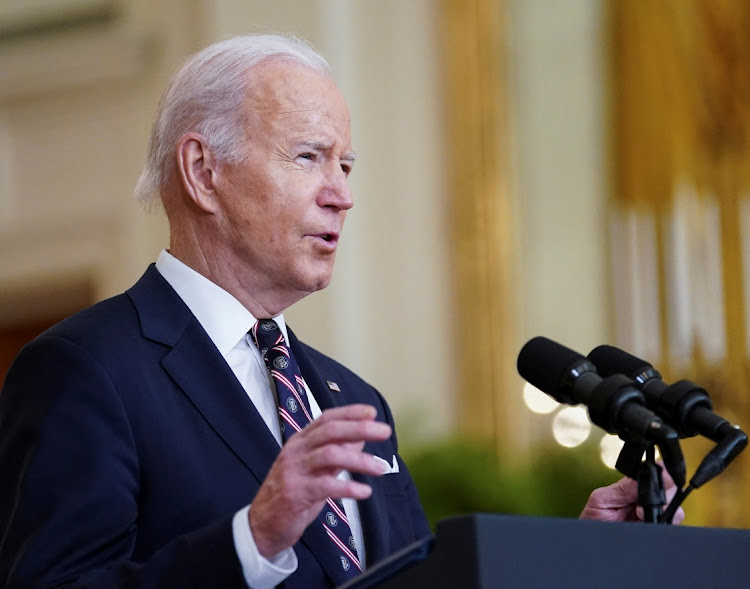 US President Joe Biden provides an update on Russia and Ukraine during remarks at the White House in Washington, the US, February 22 2022. Picture: KEVIN LAMARQUE/REUTERS

Washington — US President Joe Biden  announced on Tuesday what he called the “first tranche” of sanctions against Russia, including steps against its banks, saying Moscow had started an invasion of Ukraine.

The White House said Russia’s deployment of troops into two Moscow-backed, self-proclaimed republics in eastern Ukraine is  the “beginning of an invasion”.

“I have authorised additional movements of US forces and equipment already stationed in Europe to strengthen our Baltic Allies — Estonia, Latvia, Lithuania,” Biden has said.

The move came after the UK slapped sanctions on Russian banks and high net worth individuals while Germany, another of Kyiv’s Western allies, halted the approval process for the Nord Stream 2 gas pipeline project.

Russia's president may push even further West, according to William Alberque of the International Institute for Strategic Studies. "Possibly even towards Kyiv if the front line opens up so much."

Nato secretary-general Jens Stoltenberg said earlier on Tuesday that the alliance believed that Russia was still planning a big assault on Ukraine following Moscow's recognition of the separatist regions.

“Every indication is that Russia is continuing to plan for a full-scale attack of Ukraine,” Stoltenberg told a news conference in Brussels. “We continue to call on Russia to step back ... it’s never too late not to attack.”

Russia’s parliament approved treaties with the two regions a day after Russian President Vladimir Putin said he was recognising the independence of the two enclaves in eastern Ukraine, which adjoin Russia and have been controlled by Russian-backed fighters since 2014.

Putin said the territory covered the entire Donetsk and Luhansk regions of eastern Ukraine, not merely the parts currently controlled by separatists. The move appeared to increase the likelihood of conflict.

He also signed a decree on deploying Russian forces there, and on Tuesday Russia’s upper house of parliament formally granted his request to use troops abroad with immediate effect.

The prospect of a disruption to energy supplies and fears of war — stoked by reports of shelling in some areas and movements of unmarked tanks overnight in the rebel-controlled city of Donetsk — rattled international financial markets and sent oil prices surging to their highest level since 2014.

In Donetsk, some residents celebrated, with cars flying Russian flags and sounding their horns. But several blasts were heard in the city on Tuesday, and some people questioned whether Putin's moves would bring peace.

Germany is Russia’s biggest customer for natural gas, and the decision by Chancellor Olaf Scholz to freeze the Nord Stream 2 pipeline — built but awaiting approval — was widely seen as one of the strongest measures Europe could take.

Scholz said he had asked his economy ministry to take steps to ensure that certification could not take place for now.

The Kremlin regretted Germany’s move and said it hoped the delay was temporary. Putin said Russia “aims to continue uninterrupted supplies” of energy to the world.

British Prime Minister Boris Johnson and French President Emmanuel Macron meanwhile agreed on Tuesday to continue to work together to target those who supported what Johnson called Putin's “aggressive approach”.

“Russia’s actions don’t just threaten Ukraine’s sovereignty, but are a blatant attack on freedom and democracy, the leaders agreed,” a joint statement said.

Russia and Belarus crank up pressure on Ukraine with extended drills