In countries where abortion is highly restricted, such as Poland, women have been unable to travel abroad to terminate an unwanted pregnancy 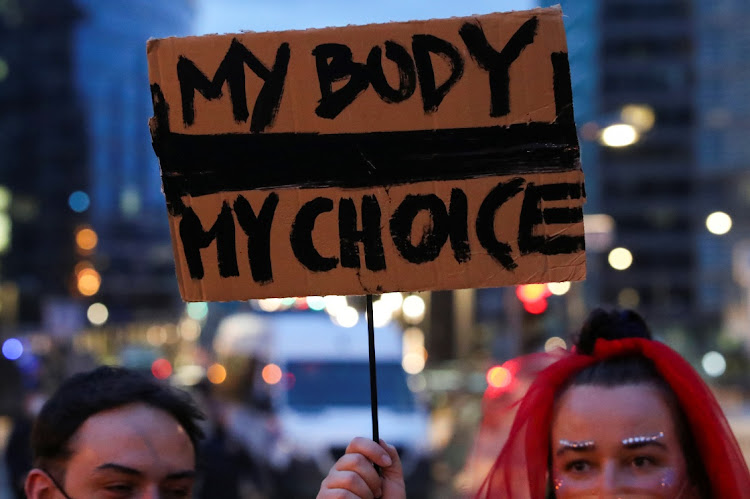 A person holds a sign during a protest against the ruling by Poland's Constitutional Tribunal that imposes a near-total ban on abortion, outside the EU headquarters in Brussels, Belgium November 11 2020. REUTERS/YVES HERMAN

Lisbon — Helplines across Europe have reported higher demand for their services as the coronavirus pandemic adds to the hurdles many women face to access abortion.

While abortion is legal in most of Europe, some women have struggled to get appointments in public health systems overwhelmed by the pandemic. Others could not escape abusive partners because of lockdowns, non-governmental organisations and some women who chose to have an abortion told Reuters.

In countries where abortion is highly restricted, such as Poland, women found themselves unable to travel abroad to terminate an unwanted pregnancy as the pandemic grounded flights and closed borders.

“In some cases it made abortion catastrophically more complicated,” said Mara Clarke, head of the UK-based Abortion Support Network (ASN), which helps women get abortions abroad.

Sending abortion pills by post, a common practice for organisations helping women in places where it is not widely available, became difficult because packages were taking weeks to be delivered.

When she found out she was pregnant in April, mother-of-two Ania, from Warsaw in Poland, said she had experienced two miscarriages and decided it was not the right time to have another baby.

“It was intense ... really hard,” she said. “If it wasn't for the pandemic I would have gone to another country — to Slovakia or the Czech Republic.”

Ania, who declined to give her surname for fear of stigma, eventually managed to terminate her pregnancy with help from Women on Web, an NGO which supports women in her situation.

She is one of thousands of people now protesting in Poland against a court ruling last month that could amount to a near-total ban on abortion in the staunchly Roman Catholic country.

Abortion Without Borders, a helpline in Poland that was launched in December 2019, has received nearly 2,300 calls in 2020, with a jump in requests for help since a lockdown was announced.

Women in the island nation of Malta, the only country in Europe where abortion is banned, and where the airport was shut for months due to Covid-19, were the worst hit, Clarke said.

In Romania, where abortion is legal within a 14-week limit, some women struggled to access services as the government deemed it a “nonessential procedure” as its healthcare system battled the coronavirus, women's rights groups said.

Romania-based Filia said in April only 11% of 112 state hospitals surveyed were providing abortions, and none in the capital Bucharest.

Experts fear restrictions to tackle a second wave of the coronavirus in Europe will create further challenges, especially in countries where healthcare systems are under-resourced.

“The pandemic had an impact on reproductive health as a whole - because it was not considered a priority,” said one of Portugal's top obstetricians Teresa Bombas.

Rebecca Gomperts, founder of Women on Web, said remote working and lockdowns also created problems for some women with controlling partners as they were unable to leave home.

Requests to Women on Web have been higher this year than the group expected based on previous years, particularly in Portugal — where the procedure is provided mostly in a hospital setting — with 34 demands, and in Northern Ireland — where abortion was decriminalised in 2019 — with 97.

Some governments have taken steps to tackle the issue. In Britain, where abortion is legal in England, Scotland and Wales within a 24-week limit, women can now take abortion pills at home instead of going to hospital and some consultations have moved online.

But rights groups say many more will face a struggle in the coming months because of the economic damage caused by the pandemic.

“Half of all pregnancies are unplanned and people will look at the economic forecast right now and decide not to do it,” Clarke said. “We are in for a very hard 2021.”

The standoff with the women-led protesters has become critical for the ruling Law & Justice party, which has also labelled the gay community an enemy
World
6 months ago

Marta Lempart, a lawyer by training, says parallels between the Polish and Belarusian movements are clear: they are being run by Eastern Europeans ...
World
6 months ago

Trying to quell ongoing protests, abortion due to ‘lethal’ foetal abnormalities may be allowed
World
6 months ago

In the largely Catholic country, the ruling bans abortions even due to foetal defects, the most common of the few legal grounds for abortion
World
6 months ago
Next Article