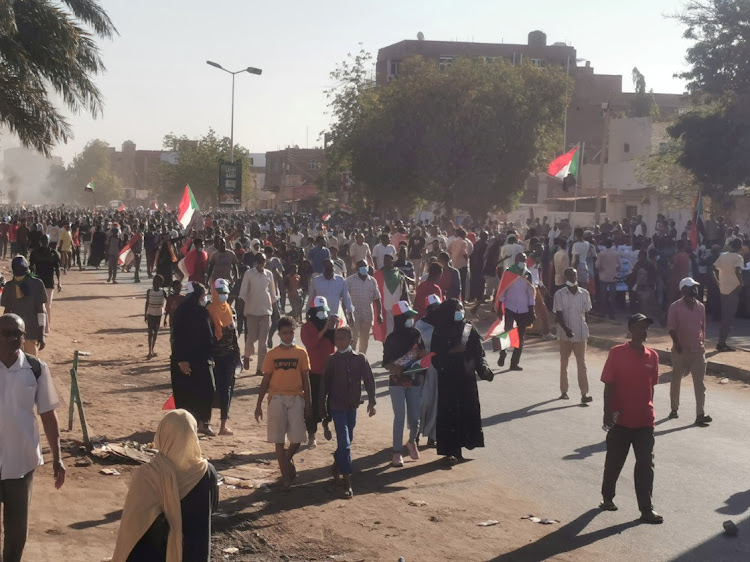 The October 25 takeover ended a partnership with civilian political groups since the toppling of Omar al-Bashir in 2019 and drew condemnation from Western powers, which have suspended aid.

While bridges between the capital’s sister cities were left open at the start of the protests, heavily armed police forces took to central Khartoum, where protesters planned to march on the presidential palace.

Police fired teargas and stun grenades as protesters gathered about a kilometre from the palace, blocking a main road and chanting “Soldiers belong in the barracks”.

Forces chased protesters in and out of side streets, where the some began barricading and gathering in smaller groups. In a statement, the Sudanese Professionals Association said protesters were being arrested.

The Central Committee of Sudanese Doctors said one injured protester was arrested while receiving treatment inside a nearby hospital, and that others had been injured after handling stun grenades.

Other protests took place in cities including Port Sudan, Kassala, Nyala and Atbara.

The committees and political parties have rejected the deal signed by Hamdok, who said it would bring the release of dozens of detainees, end a crackdown on protesters that has seen 43 people die, and preserve billions in foreign aid.

Hamdok said on Saturday he had replaced Sudan’s police chiefs after protesters were killed in crackdowns.

The protester-aligned doctors committee said on Tuesday that a protester had died as a result of being beaten on the head during the last march on Nov. 25.

Referencing top military generals, the Khartoum committees said on Monday they “do not differentiate between Hamdok or Burhan or Hemedti and the rest of the generals, they are all participants in the coup and belong in the gallows.”

Some of the freed politicians were seen at the protests.

Wagdi Salih, popular leader of a controversial anti-corruption taskforce, was released late on Monday night, according to his Twitter account and sources close to him.

“There are still detainees in Soba prison in Khartoum, men, women and children who were arrested during the protests under the state of emergency and we demand their release along with others across Sudan's states,” he added.

Military ruler Abdel Fattah al-Burhan has said the takeover was needed to set Sudan's transition back on track and that peaceful rallies are allowed. Deaths during protests are being investigated, he has said, blaming police and armed political factions.

Sudanese forces crack down on thousands of protesters in Khartoum

Hamdok will lead a government of technocrats during a political transition expected to last until 2023, and all political detainees are to be freed
World
2 months ago
Next Article