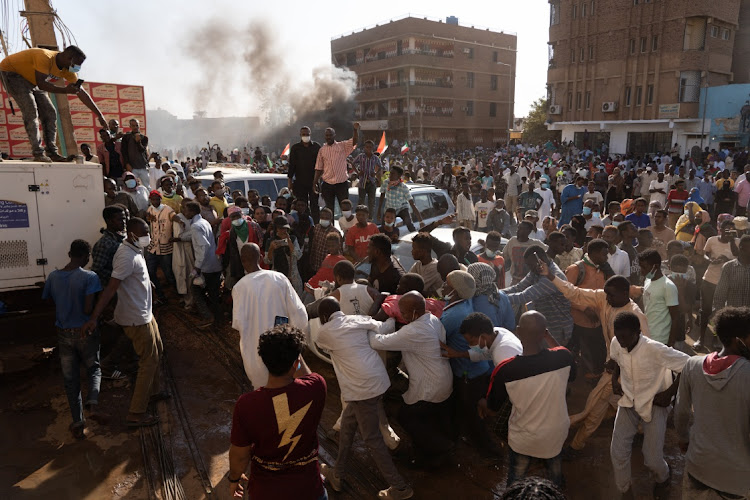 People carry an injured person to the Al-Arbaeen Hospital during a demonstration in Khartoum, Sudan, November 13 2021. Picture: ABDULMONAM EASSA/GETTY IMAGES

Khartoum  — Security forces shot dead at least 10 people and wounded dozens as thousands of Sudanese protested against October's coup in Khartoum and other cities on Wednesday, medics said.

The protesters, marching in neighbourhoods across the capital and its twin cities of Bahri and Omdurman, demanded a full handover to civilian authorities and for the leaders of the October 25 coup to be tried in court.

“The coup forces used live bullets heavily in different areas of the capital and there are tens of gunshot injuries, some of them in serious condition,” said the Central Committee of Sudanese Doctors, a group of medics aligned with the protest movement. It reported 10 deaths, including seven in Bahri.

On one main road in Khartoum, protesters burnt tyres and chanted: “The people are stronger, and retreat is impossible.”

Others carried pictures of people killed in previous protests and of Abdalla Hamdok, the civilian prime minister who was placed under house arrest during the coup, with the slogan: “Legitimacy comes from the street, not from the cannons.”

Images of protests in towns and cities including Port Sudan, Kassala, Dongola, Wad Medani and Geneina were posted on social media.

There was no immediate comment from security forces. Military leader Abdel Fattah al-Burhan has previously said peaceful protests are allowed and that the military does not kill protesters.

The coup ended a transitional partnership between the military and a civilian coalition that helped topple autocrat Omar al-Bashir in 2019.

Despite pressure from Western states which have suspended economic assistance, efforts at mediation have stalled, with Burhan moving to cement control with help from Bashir-era veterans.

One demonstrator in Bahri said the air was thick with teargas and that security forces were using rubber and live bullets.

“The main meeting points were completely occupied by security forces,” said the demonstrator, who asked not to be identified.

A resistance committee member said protesters aimed to wear down security forces by meeting in different locations, constructing barriers and regrouping after being dispersed.

“The coup forces are practising excessive repression and are encircling the revolutionaries' marches in several areas,” said the Sudanese Professionals Association, which has helped promote the protests. “This was preceded by the deliberate interruption of voice and internet communications services.”

Mobile internet services in Sudan have been suspended since the coup. This has complicated a campaign of antimilitary rallies, strikes and civil disobedience.

The Sudanese Congress Party, which was part of the military and civilian coalition, said one of its leaders had been arrested after a raid on his house.

On Saturday, hundreds of thousands turned out across Sudan to protest against the coup. Medics said seven people were killed by security forces.

The new 14-member Sovereign Council,  includes civilians  but none from the   political coalition that had been sharing power with the military since ...
World
7 months ago