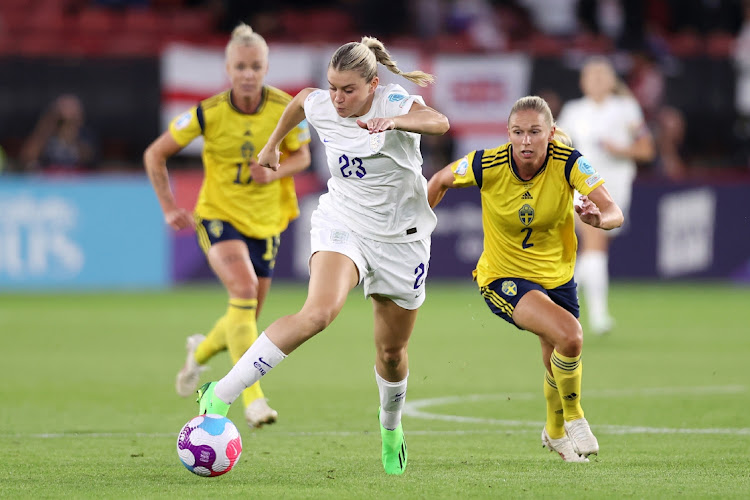 Alessia Russo of England runs with the ball during the UEFA Women's Euro 2022 Semi Final match between England and Sweden at Bramall Lane on July 26 2022 in Sheffield, England. Picture: GETTY IMAGES/NAOMI BAKER

In the midst of a landmark Women’s European Championship that has broken several records, Alessia Russo’s back-heel goal in England’s 4-0 win over Sweden perfectly distilled the wider appeal of the women’s game into one outrageous moment.

With England already leading the semifinal 2-0, Fran Kirby found Russo unmarked in Sweden’s penalty area, but the chance appeared to have been spurned when the Manchester United forward’s shot was parried away by goalkeeper Hedvig Lindahl.

Undeterred, Russo pounced on the rebound and produced an outstanding piece of improvisation, sending a cheeky back heel through the legs of Lindahl to all but ensure England’s progression to the final on home soil.

“To be honest I haven’t seen it back yet,” Russo told the BBC. “All I can remember is that I missed a sitter at first and I thought ‘I’ve got to do something about this’.

“I just got it in the net as quickly as I could. It was great. I can’t really remember what happened or what really came over me to try and do that.”

Even Russo’s England teammates were left dumbfounded by the goal, with Chloe Kelly telling Sky Sports, “I couldn’t believe it! She’s unbelievable, it just sums her up, what a finish.”

Arsenal great Ian Wright hailed the 23-year-old’s quick thinking. “The improvisation is fantastic. When she came on she instantly made an impact,” Wright told the BBC.

Beth Mead, Lucy Bronze and Kirby also got on the scoresheet against Sweden, but it was Russo’s 68th-minute effort that lit up social media.

“What a brilliant finish from Alessia Russo to match a brilliant performance from the Lionesses,” former England striker Michael Owen wrote on Twitter.

American Abby Wambach, who scored 184 goals in 252 matches during a 15-year career in international play, tweeted: “I dreamt of scoring a goal like that my whole life. Never happened. Alessia Russo take a bow.”

England will face the winner of Wednesday’s semifinal between Germany and France in the final at London’s Wembley Stadium on July 31.

The side continue to earn less than Bafana Bafana, despite outperforming them
Sport
3 weeks ago
Next Article