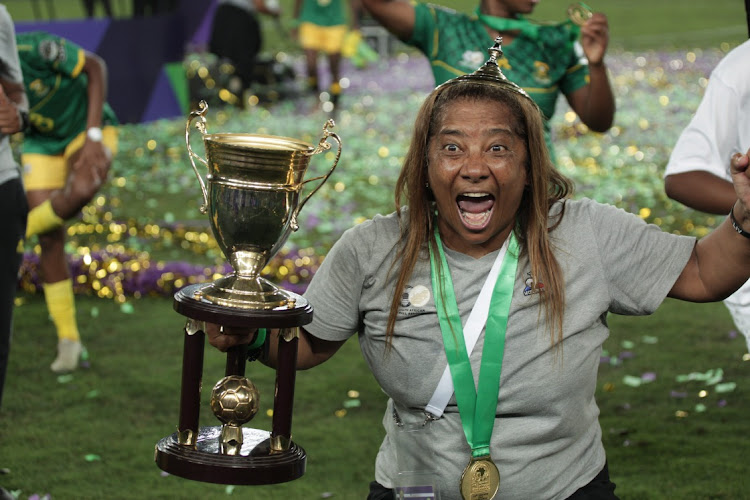 If non football-loving South Africans didn’t already know the name Desiree Ellis, they certainly do now after the 59-year-old Banyana Banyana coach guided her team to a historic first Women’s Africa Cup of Nations (Wafcon) title with victory over Morocco in Rabat on Saturday night.

Despite a long list of accolades that include a Silver Presidential Sports Medal in 2001, a lifetime achievement award in 2008 from the SA Football Association (Safa), an induction into the GSport Hall of Fame in 2009, ambassador for the 2010 Fifa World Cup, three successive Confederation of African Football (Caf) Women’s Coach of the Year awards, as well as being a respected television pundit, Ellis has well and truly written her name into the pantheon of national heroes with Banyana’s maiden continental title.

The golden trophy was enough to send a nation battered by a myriad problems, including daily revelations of corruption, unprecedented power cuts and a record 35% unemployment rate, into unbridled celebrations.

Being the modest and self-effacing individual she is, Ellis is always quick to shift the focus to her players, her employers, Safa and loyal sponsors like Sasol “who have created opportunities for women in football”.

When accepting the award for 2021 Coach of the Year at the Caf awards ceremony just two days before the final, Ellis was typically swift to put her accolade into perspective: “This is a team award because as a coach you work with a team, so if the team does well, the individual stands out.

“I dedicate this award to the Banyana team and the coaches in our women’s football because of the contribution they have made to the national team for me to win this award,” she told the assembled media in Rabat, the capital of Morocco.

Banyana’s historic success is no fluke but rather the product of long-term planning during which the team undertook a huge roller-coaster ride. The highs included a historic qualification for the 2019 Women’s World Cup in France and four Cosafa titles between 2017 and 2020, the first of which elevated Ellis to become the first South African to win the competition as player and coach.

The troughs included failing to qualify for the 2021 Tokyo Olympics after a second-round defeat to Botswana and a fourth-place finish in 2021’s regional competition, which led to inevitable calls for the coach’s head from some quarters.

Thankfully, Safa was unbowed and have been vindicated by their faith in Ellis’s ability. That perseverance and patience has been richly rewarded with the team’s success, not only in winning their first Wafcon title after losing in each of their four previous appearances in the final (in 2000, 2008, 2012 and 2018), but also qualifying for a second successive World Cup that will be hosted in July 2023 by Australia and New Zealand.

The stability in the Banyana set-up contrasts starkly with the turbulence in the Bafana Bafana ranks. In the six years that Ellis has been in charge of Banyana, first on an interim basis after the 2016 Olympics, and then permanently since February 2018, Bafana have had Stuart Baxter, Molefi Ntseki and present incumbent Hugo Broos guiding their fortunes without much success.

Of course, Ellis learnt a great deal during her two-year apprenticeship under coach Vera Pauw, who qualified the team for the Rio Olympics, and the former Banyana striker is never remiss to acknowledge the role played by her Dutch mentor in her development. Still, the former striker took up the baton with poise and continued to grow once the learner’s plates were removed.

Remember, the coach of any football team, especially at the game’s higher levels, not only has to be tactically astute but has to have great management skills to coax the best out of the players.

A Caf A licence holder, Ellis was one of only three women coaches at Wafcon along with Botswana’s Gaoletlhoo Nkuwitsang and former Togo international Kai Tomety. In the final against hosts Morocco, she struck a huge blow for local coaches by coming up trumps against former France international Reynald Pedros, who guided Lyon to successive Uefa Women’s Champions League titles in 2019 and 2020 before taking up the job with the Atlas Lionesses.

And in the first group game, Ellis also got the better of the experienced American, Randy Waldrum, when Banyana beat defending champions Nigeria more convincingly than the 2-1 scoreline suggests.

Being the determined individual she is, Ellis’s journey to the top has had its fair share of challenges that would have diverted those made of more pliable material to a more serene path.

As a Banyana player, she lost her job as a spice-mixer in a local butchery and was forced to do odd jobs for three years to earn a living. She once worked at Kickoff magazine, replying to fan mail and assisting with subscriptions, often having to take the last taxi home to the notoriously dangerous, gang-ridden township of Hanover Park in Cape Town.

She had to forego the opportunity to complete a prized Uefa B coaching licence, instead giving priority to paying off her car and house.

Ellis’s patience, commitment and determination have delivered rich rewards. Making history and being the pride of the nation couldn’t have happened to a nicer person.

While SuperSport United coach can count on support, Chippa United has a revolving door reputation
Sport
1 month ago