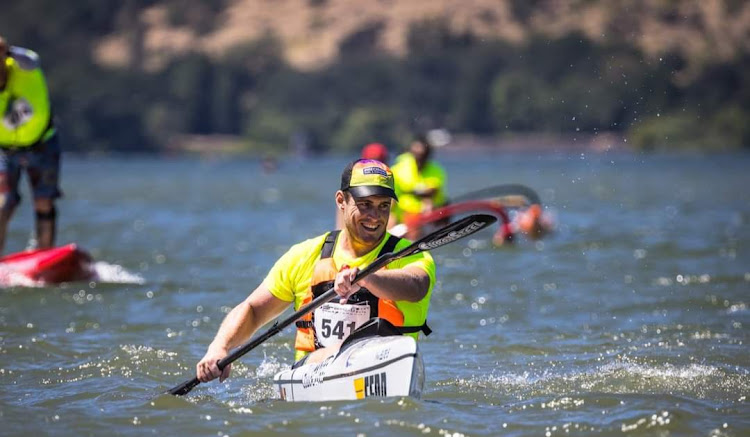 Fast-rising water levels in the confines of a river gorge are a common natural hazard of outdoor activity. But when it comes to the last few years of a particularly gruelling paddling event in the US, there has been a SA “Ricing of the Gorge”.

Surf-ski paddler Kenny Rice of Kalk Bay in Cape Town returned from the US earlier in July, fresh from logging up his fourth Gorge Downwind Championships victory, the only man to have won more than once on the cascading Columbia River.

Down the years, the Gorge has had a strong SA flavour. This year wasn’t any different as Rice was joined by countrymen — Capetonians, in fact — Nick Notten and Jasper Mocke in the top five.

“The Gorge is pretty unique in more ways than one. Most surf-ski races are on the ocean where the wind and currents combine to form what we call ‘runs’ that we catch and surf down,” says Rice.

“In the Gorge there’s a big temperature difference between start and finish which causes the wind to roar up the valley against the current and forms much bigger runs, almost standing waves which we catch.

“But it’s not really a dangerous race as in rapids etcetera, apart from the wind and kite surfers, the extreme wind and then gill-nets for catching fish near the sides of the river. And there are also plenty of very big sturgeon, really weird fossil-like-looking fish.”

Rice racked up his first Gorge win in 2017 (his first international triumph) and listening to his race reflection, it was an intensely emotional moment for the 26-year-old.

“My older brother Sean was second that day. I’ve always put my brother on a bit of a pedestal — he’s something of a secondary father figure for me and I never thought I’d be able to beat him. I kind of grew up in my brother’s shadow, he was so talented at everything he turned his hand to … I was the fat kid who wasn’t good at anything.”

Rice junior returned to the Gorge in 2018/2019 to make it a hat-trick of Downwind wins. “To go back and win in 2018 and back up the previous win was really special.”

Then came the Covid-19 pandemic and the ocean was so near yet so far from Rice’s Kalk Bay digs. “I’ve got an Ergo [stationary canoe] at home and have a stunning view of the ocean, but within a few days I had to move it to the back courtyard as I simply couldn’t bear to see the sea. The  first few weeks of lockdown saw perfectly peachy conditions, the swell was cooking. It really made me appreciate my paddling even more.”

Going back to the Gorge postpandemic in 2022 and Rice was riding something of a rollercoaster. “Late last year I changed boat brands after many years, went the ‘local’ route and started racing for East London-based Fenn Kayaks, so to get a win for them after a rough few weeks build-up [starting a new job and one or two personal things] made me really chuffed.”

Rice didn’t even realise he had won when he crossed this year’s finish line. I thought Nicky [Notten] and I were racing each other behind the leaders so it took a long time to finally sink in.”

He does realise though that even in outdoor-mad SA, in the broader scheme of things, the surf-ski code is very much a big fish in a small pond. “It’s a selfish sport. You have to spend so much time on your own out on the water, often pre-sunrise, you have to hold down a day job and you’re never going to get rich like the professional rugby or cricket players.

“In fact, a bunch of us were watching the Tour de France cycle race the other day and thinking ‘wouldn’t it be cool if we were good at a sport that people actually cared about’.”

If it wasn’t surf-ski that tugs at the youngster’s heartstrings, there would still be that need for speed and action. “I absolutely love motorbike racing and idolise the likes of our own Brad Binder and [Italian legend] Valentino Rossi, the way they are in tune with and trust their machines at such speeds.

“Surfing is also a great love. Those guys lead such cool lifestyles, seeing unbelievable places … their sport is out in nature, using the waves and at the mercy of nature.”

But there’s also danger out in nature, as Rice found out recently. “I wanted to take a GoPro while out paddling and get a selfie with an orca next to me … because there are two big orcas, Port and Starboard, known to frequent the bay.”

Rice was paddling from Fish Hoek to Miller’s Point when he heard a loud splash just more than 50m to his left. “This huge whale surfaced, I got such a fright, said some unsavoury words and screamed.”

The next thing a second whale surfaced and both came swimming towards him. “I felt so insignificant and inferior. In all the confusion I dropped the GoPro and never got a shot. I was convinced it was Port and Starboard but it later transpired that they were most likely to have been humpbacks.”

In 2015 Kenny was second in the under-23 division and went on to win the same division two years later in Hong Kong. “So if I could win the senior title this year I’d be the first person in history to win the juniors, under-23 and seniors. That trifecta would be amazing so there’s a lot of motivation to do that.”

One could say should that come to pass it would be the final “Ricing on the cake” for the former “fat boy” who has left his surf-ski rivals scrapping for slim pickings in his wake.