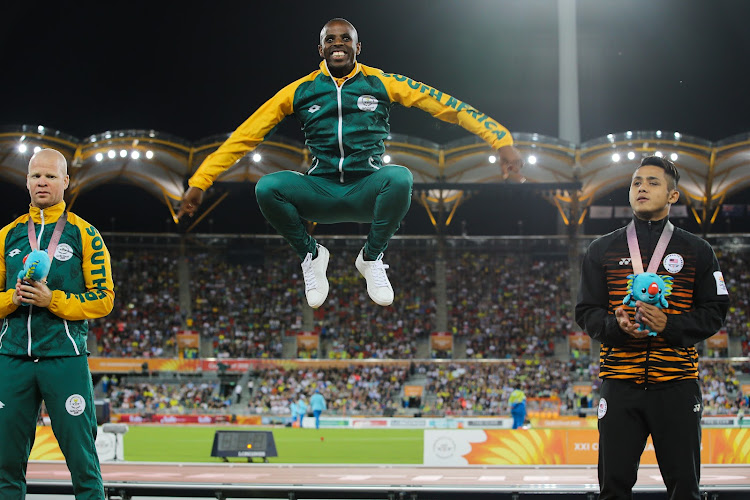 Ndodomzi Jonathan Ntutu jumps for joy after winning gold at the Commonwealth Games in Gold Coast in 2018.Joining him on the podium are teammate Hilton Langenhoven, left, and Mohamad Ali Hanafiah Muhammad Afiq of Malaysia. Picture: GALLO IMAGES/ROGER SEDRES

In chasing his dreams, visually impaired veteran track sprinter Jonathan Ntutu has visited more cities and countries around the world than he can remember.

Birmingham, England will be the latest of those when the Commonwealth Games kickoff next week.

Now 36 and still suffering from toxoplasmosis, a parasitic infection which affected his sight from an early age, Ntutu is nearing the end of an impressive time on the track. But when all’s said and done his given isiXhosa name neatly sums up what he’s all about.

Ndodomzi means “man of this home” and it’s a case of “east, west, home’s best” for Ntutu, who still sports one of the biggest smiles on the para-sport track circuit.

“True, I’ve travelled a lot around the world and if I had to pick one city it would have to be Barcelona, Spain. I’ve had some amazing training camps and competitions there. Sure, the people don’t speak much English but they’re truly lovely people,” says Gugulethu-born Ntutu who lives in Bellville, Cape Town.

“Away from the track my life is really simple. I’m definitely a home body and my family is very supportive of everything I do.”

There’s also an undertone of life in SA in his answers. “I just try to stay safe, as life in SA is so unpredictable.

“My wife Natasha and I just keep life as simple as we can. Our kids, Nalin (11) and Nathan (4) are the absolute centre of our world. Natasha is a very special mom and I love her dearly.”

The world stage has taken Ntutu far and wide. He’s been to no fewer than five Paralympics, starting in Athens in 2004 and the most recent being the Tokyo version of the Games last year, 17 years later.

His favourite is the most recent major medal which came four years ago at his first Commonwealth Games where he won T12 (visually impaired classification) gold in Gold Coast, Australia.

“That was a proud top-of-the-podium occasion. Jumping on to that podium was my very happiest moment. My absolute golden time,” he remembers fondly.

He has an interesting take on the difference between the Paralympic and Commonwealth multi-code events.

“So the latter are really great in terms of inclusiveness where us para-athletes really strive to be a part of the team. Getting to come together with mainstream, normally enabled athletes as one team is a very special feeling. It’s one team, one medal and all our medals count towards the total team medal haul.”

Paralympics? “They’re the true pinnacle for para-athletes. I have five under my belt and all of them are just as special as the very first one that I went to.”

He remembers the Rio Paralympics with the most regrets. “It was a year where I suffered knee and lower back injuries that hampered my entire preparation and even though I won silver it still wasn’t enough for me. I was upset at not being in a position to capitalise on what turned out to be a slow race for gold.”

Ntutu’s been through a great deal of hardship to get as far as this. Apart from his sight problems, he lost his dad when he was just 10.

Away from home and he experienced the trauma of a severe earth tremor while at the 2011 IPC Athletics World Championships in Christchurch, New Zealand. Three weeks later the city was devastated by a 6.3 magnitude quake that destroyed the Queen Elizabeth track used at the event.

“That is an experience I’ll never forget. Those Games had it all. I won silver in the 100m, gold in the 200m [before I was disqualified], and my firstborn was born while I was there. The very first tremor came after 5am while we were still sleeping but I was really scared when the next one came while we were awake.”

For now Ntutu is still competing. “I’ll let my body guide me in terms of elite competition but my dream is to go into the administrative side of sports, athletics eventually but also general sports.”

But as everyone knows, times are tough in SA and especially so for athletes already living with disabilities.

“Sascoc’s Opex [Operation Excellence] programme was very helpful for us as para-athletes. The funding was the basis of the success that was achieved by most of our athletes. That Opex needs to get reinstated, because if athletes need to work as well as train, then you’ll almost surely end up losing that athlete.

“Funding is going to be crucial in the lead-up to both the Paris World Champs and Paralympic Games. If there’s no funding, I fear both those games will be a real disaster for Team SA.”

On a personal level, like so many South Africans, Ntutu’s life is also a daily struggle. “I’m not working now and have finished all my savings. There’s zero financial support for me from local government or the Opex programme. It’s tough, really tough,” he sighs.

So, while sports, arts and culture minister Nathi Mthethwa mulls grandiose R22m flag projects, spare a thought for the likes of homeboy Ndodomzi Ntutu, who’ll be doing his utmost best to get to Birmingham and fly the SA sports flag high — all while running on the smell of an oily rag.