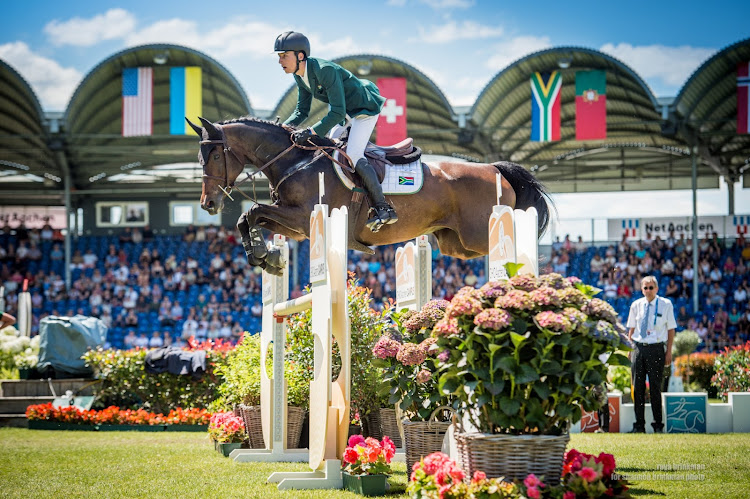 As an 11-year-old, Thomas van Rijckevorsel swapped rugby for riding horses, tackling for tack and scoring tries for saddling up in the international arena.

Earlier in July the former rugby No 7 player sat proudly atop Lucy 781 as the combination won individual gold at the 2022 Youth Equestrian Games in Aachen, Germany.

The competition, featuring the world’s top 30 junior riders, was set up to replace the equestrian code at the 2022 Youth Olympics, which were scheduled for Dakar, Senegal but postponed due to the Covid-19 pandemic.

As the dust settles on the now 17-year-old’s achievement, SA sport can celebrate the Johannesburg teen’s feat of being the world’s top junior rider.

When family and the riding fraternity talk about him, the common denominator is humility and it shines through from the very get-go.

“To be honest, it’s not really sunk in and it still feels surreal,” he reflected this week. “But I do go over it in my head a lot, it’s amazing. Most of the riders had a big party that night but I’m not the most epic partier, though I enjoyed the celebrations.”

In Aachen riders were allocated horses in a lucky draw. “We only had three days to ride the horses ... and Lucy 781 was very similar to Capital My Lady, one of my horses here at home.

She’s a real fighter, opinionated, and slightly crazy ... the way I like my horses, not too big and slow, so that helped us click.

“Thankfully we got on very well from the beginning. She’s a real fighter, opinionated, and slightly crazy ... the way I like my horses, not too big and slow, so that helped us click. In the beginning she couldn’t really turn as well as I’d have liked but we figured it out, I just needed to be a bit softer with her.”

“On paper I wasn’t as experienced/exposed as many of the other internationals but when I was named the first driver to draw a horse it felt like a sign that Lucy 781 and I stood a chance of doing well.”

How does the home-schooled 17-year-old, who spent a large part of his life in the quiet coastal enclave of George deal with the stress of big-time showjumping?

“I’m just not really that stressed, the only time I may get a few butterflies is on the way to the show in the car [he’s a huge Formula One fan too] but once I’m there I always have something to focus on — if you’re busy then you can’t get distracted. I just stay focused and if I’m focused I don’t get too nervous.”

Behind every horse and rider combination is a coaching component and in his case it’s the vastly experienced Dominey Alexander, better known for coaching adult-senior riders.

“What sets him apart, apart from his talent, is that he’s very hungry, but at the same time has the most incredible big-match temperament ... very focused yet relaxed, his ability to perform under pressure is unbelievable.”

Kyalami-based Alexander says he lies awake in bed at night, marvelling at what his charge has achieved. “The other kids have jumped all around the world, and now Thomas is a world champion.

“It’s so good for SA sport. It shows us that we can be so far away from the rest of the world and the competition arena yet we can still train here and win over there. This victory does two things: it inspires both his and the next generation and gives the older riders a sense of admiration because they know how hard it is to go overseas and win.”

Van Rijckevorsel agrees that respect between rider and coach is mutual. “Having a good instructor is one of the most important factors and I have the best ... I started with ‘Oom Dom’ at the beginning of last year, and he’s always there for me, we jump every day. I simply couldn’t do it without him, he just really ‘gets me’.”

Apart from rider, horse and coach another key component all too often gets overlooked in the mink and manure equestrian world and that’s the groom, who is the equivalent of a Formula One pit crew.

That job belongs to William Dwayi, who moved to George/Johannesburg from Cape Town in 2019 to team up with Thomas and horses.

“Will is the best groom ever, he loves me and my horses and My Lady is his favourite horse in the whole world,” says Van Rijckevorsel. “I sent him a video of me riding Lucy 781 in Aachen and he said ‘you’re gonna win with her!’

“I’m with Will every day, for most of the day, he’s always so happy and positive and I couldn’t have done it without him either. He’s just amazing, he didn’t go to Germany this time but I have promised him that both of us will one day go back to Germany.”

Right now, Dwayi also has that winning feeling. “He’s such a big-hearted boy and we’ve become best friends, I don’t see myself as a groom anymore. We prepare together — when we win, we take it; when we lose, we take it ... he’s never disappointed if we lose.”

Van Rijckevorsel must be careful though. “After this win, I feel like taking my boots off and retiring — I now have a winner in Europe,” Dwayi smiles.

“This young man has such a future ahead of him ... if you spend so much time in the saddle each day, asking questions then you’re going to find the answers.”

And in this equestrian fairytale the answers aren’t blowing in the wind but being ridden like the wind.