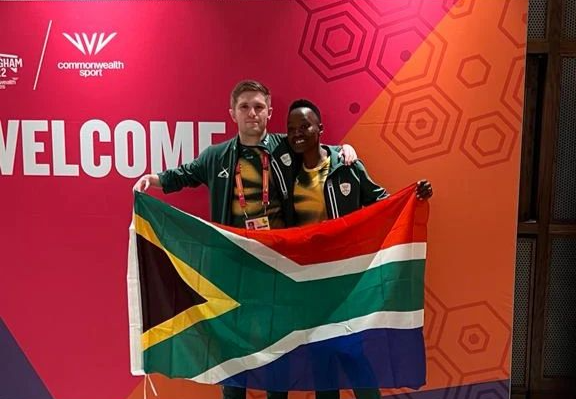 Christian Sadie and Bongi Msomi have been selected as flag-bearers for Team SA at the Commonwealth Games in Birmingham. Picture: SUPPLIED

Team SA will march into the Alexander Stadium in Birmingham in the UK for Thursday night’s opening ceremony ready to rock their sixth Commonwealth Games this century.

Nominated flag-bearers for the green and gold army will be Paralympian swimmer Christian Sadie and long-serving netball ace Bongi Msomi as the Games return to England after an absence of 20 years.

For his part, Stellenbosch’s Sadie had mixed feelings when the swimming team were called into a meeting with Sascoc (SA Sports Confederation and Olympic Committee) GM for high-performance Leon Fleiser and chef de mission Lwandile Simelane.

“I actually thought we were getting into trouble,” he smiled. “I’d already misplaced my room key card so thought I was in for a scolding!

“But we had a nice chat, and the next thing Leon suddenly announced that myself and Bongi were going to be flag-bearers at the opening ceremony. I thought I’d heard incorrectly and I just stood there for a while. It  took a long time to sink in, but what an honour and privilege!

“I had a nice chat with Bongi and we got to know each other and it was great to meet some of the other netball girls. I’m really looking  forward to walking on to the world stage with her,” Sadie said.

For her part, KwaZulu-Natal’s Msomi may be a Games veteran but the magnitude of the moment was certainly not lost on her.

“I don’t normally share much emotion but I definitely shed a tear or two. It’s really such an honour … my third Games and I get to walk in front and lead SA at the opening ceremony.

“I feel very special and it’s great to walk this path with Christian. It just shows that sport is for all and we represent this much very well.”

Badminton will be one of the first sports with opening-day action featuring SA on Friday.

According to head coach Stewart Carson, it’s a new-look team. “Only Nita Scholtz played at the last Games in Gold Coast. She was very young there, she got invaluable experience and it’s worked out very well for her and SA badminton.”

Scholtz is by far the best South African in the national and continental mix, while in the singles, Caden Kakora was under-19 African champ. The  top doubles combo will be Rob Summers and Elliott.

As always, quality opposition in the Games build-up is a problem, but the SA team had a good few training days in Nottingham before moving to Birmingham. “Training went well but we do need match play in the Games Village. We’ve played the Maldives in a practice game and are hoping for another opportunity before Friday,” Carson said.

SA are drawn alongside Malaysia, Jamaica and Zambia.

“Malaysia are world-class opposition, but if everything came together and we played out of our skin, it’s not impossible that we could beat both Jamaica and Zambia.”

Zambia have two players who live and train in India so have the benefit of regular top-class opposition. Should SA manage to beat Jamaica and Zambia, though, and reach the quarterfinals, it would be SA’s best badminton performance at the Commonwealth Games.

Carson said his young players have had some adaptations to make in England. “They’re all on the raw side and Nottingham was by far the biggest hall they’d played in, so it was a bit of a shock for an hour or so, but all beneficial for Birmingham.”