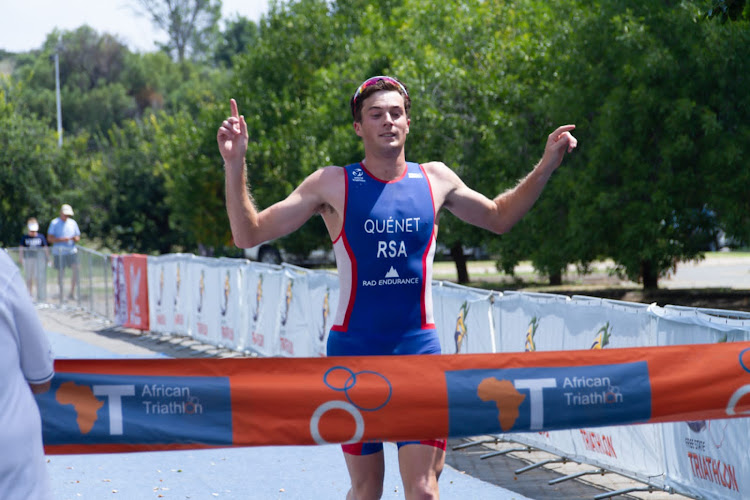 SA sport stars Beast Mtawarira , Michelle Weber and Nicholas Quenet all have one thing in similar ... and it’s not that they’ve represented their country at the highest level.

Mtawarira and Weber have worn the green and gold at the highest level, on the rugby field and in open water swimming respectively.

Quenet will do the same again, in the triathlon code, for Team SA at the Commonwealth Games in Birmingham, England, in July.

The thing binding all three of these elite sports competitors is that they’ve undergone heart surgery to ensure they can continue to perform the sports that define them at the highest level.

The 25-year-old Quenet has a condition known as Wolf-Parkinson-White Syndrome, meaning there is an extra electrical pathway between his heart’s upper and lower chambers. His particular problem is that the extra pathway is only triggered when the heart is under high pressure and when high levels of adrenaline are coursing through his body.

Hence the problem when the Boland-based athlete is training/competing at the highest level — he suffers heart arrhythmia, or irregular/excessive heart rate.

Corrective ablation surgery, where the extra pathway is cauterised, allowed both Mtawarira  and Weber to resume high-level competition.

Coincidentally, another top SA athlete, Richard Murray, who was fourth in the Rio Olympics, underwent similar surgery in 2021 and has since represented the Netherlands in the triathlon.

But it wasn’t that simple for Quenet. “I also had surgery, in August 2019, but my extra pathway was so close to the normal pathway that the risk was too much. They did, however, implant a chip in my chest to monitor the heart at all times.”

So Quenet had to venture down another pathway to pursue his triathlon dream and may inadvertently be the most laid-back athlete on the start line.

“I changed my whole approach to life and lifestyle, altered my diet and eating habits and went on to Rethink CBD products. The products help me stay calm and of course, the calmer I am, the less chances of the extra pathway operating.”

CBD (cannabidiol), is the second-most prevalent active ingredient in cannabis and it’s certainly working for Quenet.

His road to recovery was not a rushed one, with no quick fixes sought. “I believe endurance sports are all about consistent work done over time — all I can do now is to keep refining my craft and continue to set lofty targets to chase down. The good news is that I’m in the best form of my life.”

Quenet has had an Olympic dream since he was a child and these Commonwealth Games have always been a part of the plan.

“The 2022 SA Triathlon Championships in Gqeberha was a required race,” he said. He finished second to fellow Birmingham-bound triathlete Jamie Riddle. “But in addition to that I needed to do two qualifying races. I also participated in the 2022 African Triathlon Cup [Maselspoort] and the 2022 African Triathlon Cup in Swakopmund and won the national sprint title in Bloemfontein as these were the races that were required by my federation.

“Com Games will be the biggest event I’ve been to and I’m very excited to mix with other athletes who compete at the same level as me. I’ve got a few mates from different countries who have qualified in different sporting codes so it’ll be exciting to see them again. I’ve been lucky enough to make lasting friendships with other athletes worldwide throughout my athletic career and cherish those relationships.”

Quenet is also chasing times and targets away from the sporting world. “I’m completing my CA [chartered accounting] articles at an auditing firm in Stellenbosch where I’ve already successfully completed my first board exam.

So sacrifices are part and parcel of his life right now. “But I’m surrounded by the most loving and supportive people who make it possible for me to make these sacrifices. Working full time has meant that I can’t travel continuously to events but I do travel at weekends and make sure that I effectively use any time that I do have.”

Quenet is also a firm believer that a chain is as strong as its weakest link and places enormous importance on teamwork. “I’ve been through a lot with my heart, and having my people support me through those times is what got me through. Having people at your side, who have been with you on that journey makes celebrating the victories with them, the best.

Someone who knows all too well about his struggle is Quenet’s older sister, Alex. Also having represented SA in triathlon, she says: “Nick and I have been racing and training together since he was eight and I was 10.

I actually have to pinch myself to remember that this is my little brother — the one I drank tea with half-asleep in the car at 5am before morning swims.

“He’s relentlessly passionate about the sport that has given him so much and is obsessively goal-driven — sometimes to the point of annoyance,” she laughs.

“But I couldn’t be prouder of where Nick stands today. I actually have to pinch myself to remember that this is my little brother — the one I drank tea with half-asleep in the car at 5am before morning swims, the one I’ve ridden along the French Riviera with on rented bikes so we didn’t lose fitness on our family holiday!”

So while Quenet, whose father Anton was also a former national triathlon champion, may line up in Birmingham as probably the most “naturally chilled” athlete, there’s no doubting that both he and his team have thrown their whole heart and soul into getting there.