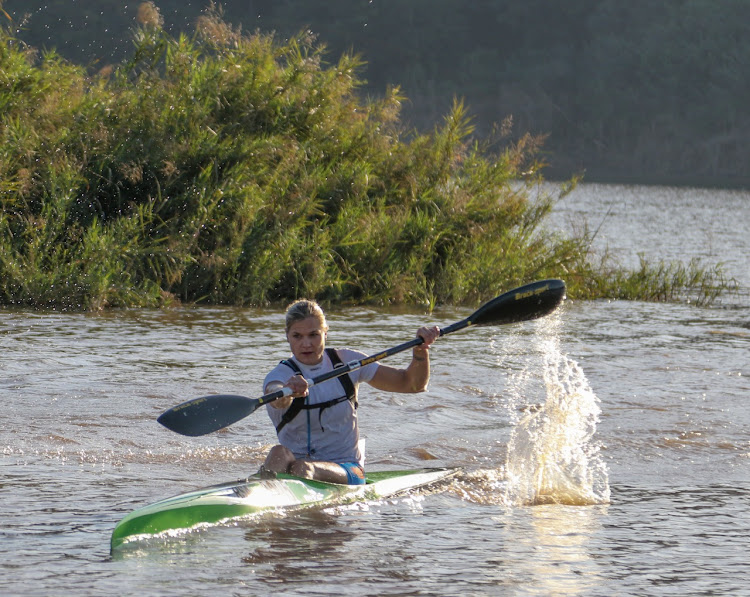 Bridgitte Hartley is pumped up to make her debut at the forthcoming World Games in Birmingham, Alabama. Picture: LYNN HAUPTFLEISCH

Crackerjack canoeist Bridgitte Hartley turns 39 just two days after making her World Games debut in Birmingham, Alabama next week but the Olympic bronze medallist’s hunger for success is that of a teenager.

The KwaZulu-Natal paddler’s Olympic medal came at the London Games and it’s hard to think that it will be 10 years in August since she powered to bronze in the K1,500m at Eton Dorney.

A three-time Olympian (London was sandwiched between Beijing and Rio) she is looking forward to her new US venture.

“I only heard about World Games at the last Olympic Games in Tokyo and don’t remember it being something that SA paddlers could qualify for but I do recall some of the Hungarian girls racing it.

“Right now it definitely doesn’t feel like an Olympic Games but in the same breath it feels like a very big competition, bigger than a World Championships. I’ve raced some of the girls, beaten some and been beaten by some, but the competition will definitely be elite.”

A sprint specialist by nature, Hartley has been testing the waters in the marathon form of the sport for the last while.

“At World Games each paddler does both the short and long course ... it’s a singles-only event, so the one day is short-course and the next, long-course.”

In February she moved from canoe seat to a place at the table when she was selected to chair the International Canoe Federation’s (ICF) Athlete Committee.

“This year is a bit of a learning curve to see what happens and how decisions are made. I’m really quite excited to make a difference, maybe not major just now, but educational along the way. Being on the SA Athletes commissions we are offered online events such as mental health and media and helping athletes engage with their peers for motivation ... The world is my oyster to create something amazing in my three-year term.”

The word board (in different interpretations) is something that crops up more than once in the course of where she finds herself in life, both on the water and on terra firma.

“Marathon has always been big in SA, mainly thanks to Hank McGregor [multiple world champion] but for me achieving the same level in sprints was tougher. Sprinting is about perfection in that short period. Getting perfect strokes for as far as possible after a good start and then focusing on the finish, it’s a very specific sport.

“Marathon is very much like a checkers board game, a case of making the right moves at the right time. If you get it wrong and work too hard you can lose your placing but if you’re the dominant paddler you can make the decisions.”

But she’s never been shy to learn. “It’s taken me a while to learn all those moves but I’m enjoying it more and more.”

With her 39th birthday looming she is often asked when she’ll be hanging up her paddles but she’s not quite there yet. “I’ve thought about it a couple of times but I love training and racing, just not every day. It’s like every sport, I guess, you go through tough phases and then suddenly you have a session or camp and you realise all over again exactly why you do it.

Then there’s board and lodging. “I’ve already got a bit of a life after paddling. I’ve got a little Airbnb that I rent out in Hilton where I live, I’m also coaching the guys at Maritzburg College and I import canoe paddles as a sideline.”

Could there be a “Baby Bridgitte” one day? “Well, I’ve always grown up wanting children and haven’t changed my mind, but I’m open-minded about that.”

And even one of her hobbies has a board theme. “I love surfing and was so reminded of that when I shared a room with bronze medallist Bianca Buitendag at the Olympics last year and was lucky enough to watch three days of live surfing.”

She’s been on the road (or water) for Team SA for 16 years and if there’s something she can pass on to the next generation it’s being aware of the lows of a sporting career.

“Many people don’t see the lows, even we elite athletes sometimes forget these major lows.”

In her particular case the lows were loneliness. “The only way I saw myself achieving at the very highest level was with my coach Nandor Almasi in Hungary and I would love the training camps, including the rest-recovery time.

“But it’s far from home for extended times and once the training weeks ended, on a Saturday night I’d walk around at a local festival and deliberately avoid going to bed early so that I could sleep late the next day. Sundays are supposed to be family days but those were my absolute worse days from a loneliness point of view.

“Being an elite sportsperson is not just about the Instagram posts, the posing in a square in Budapest or looking out over a river. There are super tough periods you go through.”

And that includes financial and support structure difficulties. “I’m super grateful for the assistance I got from the likes of Olympic governing body Sascoc and so many other sponsors over the year [financial and otherwise] but for many other countries it’s on a totally different level. Just recently I was at a competition and a team of four athletes had five support crew — a sports psychologist, physiotherapist, coach, sub-coach and a gym coach, something I could only dream of.”

For now though it’s back to the drawing board and her World Games debut ... your move, Bridgitte Hartley.