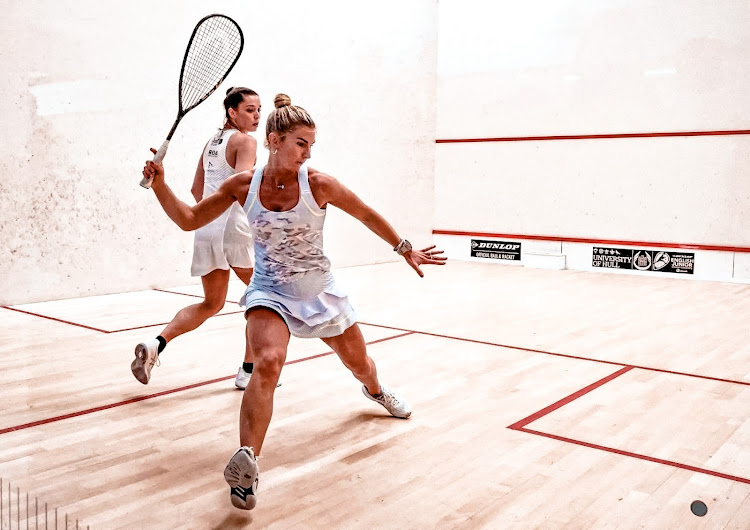 Alex Fuller puts her best foot forward on her travels around the world. Picture: PSA/NATHAN CLARKE

Living in a Box was a popular band with a hit of the same name in the 1980s… but SA sports ace Alex Fuller has had to very much think out of the box to further her sporting career.

Also, she spends much of her working day within the four walls of a squash court. Those years of perseverance have seen her enjoying her highest-ever world ranking to date (31st on the PSA list).

The sporting road has taken her around the world and to her latest base in Dublin, Ireland. Thankfully she has an ideal batting partner to face both life and sport and SA-born boyfriend Murray Commins is currently on contract with the Irish national cricket team.

The Cape Town couple come from families with rich sporting histories. Alex’s mom, Lenore, played hockey at provincial level and her grandmother was also a Springbok hockey player and top hurdler. Her dad, Peter and his three brothers were all provincial gymnasts.

Commins’s dad, John was an extremely accomplished cricketer in his own right, enjoying a successful career at Western Province and going on to play at Test level for SA.

And the sporting thread is richly entwined within this duo. Commins’ aunt, Wendy Harvey, was Fuller’s first squash coach and his mom Kim her second coach.

“I was invited to WP squash trials after only picking up a racket about three times previously and Murray and I met early on in life — our sporting and personal careers have very much grown together,” says Fuller.

“We’ve travelled a lot since then and have lived in Bury St Edmunds, Essex for a bit before moving on to Belfast, Northern Ireland and now Dublin.”

But it’s not all as easy as it sounds for the Rustenburg Girls and UCT-educated ace. “It was very tough to take that first leap and move overseas but both of us are grateful to be doing it together even though our seasons are different. Squash is more European winter and cricket is summer so we very rarely get a break together except for some time in December when we’re able to soak up some Cape Town sun, but those breaks will come eventually.

“The SA lifestyle is always my best … here my feet have barely been out of shoes for a year, but everything is for a purpose.”

Fuller frankly admits to being close to breaking point at times while based so far from home.

“Last year was particularly tough, being away from home, dealing with a foreign currency etc. Dublin is extremely expensive, and a huge learning curve in so many ways.”

A shy person by nature, it sometimes took its toll. “One just has to put yourself in uncomfortable conditions to make connections,  so it’s been a big step-up. Also, people play squash much later in the day here in Ireland than in SA and then go straight home afterwards so you miss out on the off-court inter-action.”

And, as so many sports people do, she overcompensated. “I really got stuck in last year to try and make as much money as possible, with no financial sponsors [although I have racket and clothing sponsorships with Head and Lucky in Love respectively] or regular funding. I ended up taking on too many clinics and coaching/personal trainer gigs and I burnt out for sure.”

She battled to regain her mojo and train properly for the sport she’s passionate about, feeling very much “on my own” with no coach or extended support team.

“I was advised to cut down drastically on all the extra stuff and just start looking after myself and my squash for a change. I’ve had a new coach in Angus Kirkland since October and once you start making progress in training, then winning follows and I’m in a good space right now.”

Thankfully, mom Lenore is always there for guidance: “I miss her terribly with her being away but can see the bigger picture,” says Lenore. “It’s easier for her to travel and compete from abroad. I’m happy when she’s happy so when things don’t go to plan, times are very stressful and tough as remote support just isn’t the same.

“But to me, she’s always a beautiful, caring, loving daughter. She’s beautiful to watch playing, always looks elegant on the court and plays a very appealing style of squash.”

The first names of Team SA's squad for the Commonwealth Games in Birmingham, England in July were announced on Wednesday. Squash wasn’t included in the initial team but, as is often the case, other codes are set to be named at a later date.

“I’ve never been to a big multicode games, so this would be the biggest stage for me — a dream come true and so important to get SA squash onto the world stage,” says Fuller.

“And to be part of a team set-up with such levels of support would be such a privilege. I’m crossing fingers, toes, everything that we still get to go.”

Meanwhile, this sporting couple will continue squashing as many sporting and living experiences into every day as possible, both home and away!