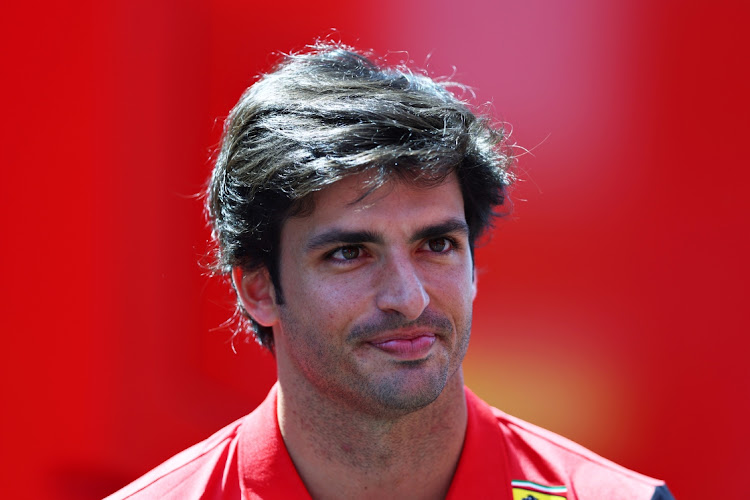 Carlos Sainz of Spain and Ferrari talks to the media in the Paddock during previews ahead of the F1 Grand Prix of Spain at Circuit de Barcelona-Catalunya on May 19 2022 in Barcelona, Spain. Picture: GETTY IMAGES/LARS BARON

Carlos Sainz has yet to step up as a Formula One winner but Sunday’s Spanish Grand Prix is a chance for the Ferrari driver to end his 146-race wait in front of a home crowd and as the season enters a new phase.

Sainz has a winning car, with teammate Charles Leclerc taking two of five races so far and leading the championship, and will have a full house cheering him on after two pandemic-hit years.

The 27-year-old has always scored at the Circuit de Catalunya, where overtaking can be a challenge, and the last time Ferrari won there it was with a Spanish driver — Fernando Alonso in 2013.

Two-time world champion Alonso, now with Renault-owned Alpine, remains the only Spanish Formula One driver to have won at home.

“The goal, as in every other race weekend, is to extract the maximum out of our car and try to win the Grand Prix,” said Sainz, who has been on the podium three times this year including second in the Bahrain opener.

“I know we will receive massive support from every grandstand at the track and I can guarantee the fans maximum effort from myself and from the entire team, to give them plenty to cheer about.”

Leclerc is 51 points ahead of Sainz but only 19 clear of Red Bull’s Max Verstappen, a situation that leaves open the question of “team orders” being imposed, although the season is still young.

Leclerc and Verstappen have won every race, with the tally 3-2 in the Dutch driver’s favour, and the two are likely to be going wheel to wheel again.

The race marks the real start of the European season, despite a race at Italy’s Imola circuit in April, and is the point at which teams pump up development. Ferrari team boss Mattia Binotto has spoken already of “important” upgrades to close a performance gap Red Bull have opened.

Verstappen is chasing a third successive win, after Imola and Miami, for only the second time in his career and at the circuit where he became Formula One’s youngest winner in 2016 as an 18-year-old.

“Hopefully we can keep the momentum going from the last few races with a clean start from Friday onwards,” said the Red Bull driver.

Champions Mercedes are also hopeful of progress after a tough start to the campaign. “A huge amount of hard work has been going on in the factories to unpick the data from Miami and turn it into improvements for Barcelona,” said team boss Toto Wolff.

“Having run there in winter testing, albeit with a car that has evolved a lot since then, it will be a good place to correlate the information we have on the current car and we’re hopeful that we’ll make another step forward.”

Seven-time world champion Lewis Hamilton has won six times in Barcelona, including the last five, but his hopes of celebrating another victory look slim.

ARTHUR GOLDSTUCK: Formula E is in pole position to overtake Formula One

Manufacturers acknowledge that electric vehicles will dominate sales within a decade, and it follows that F1 must eventually go electric too
Opinion
1 month ago