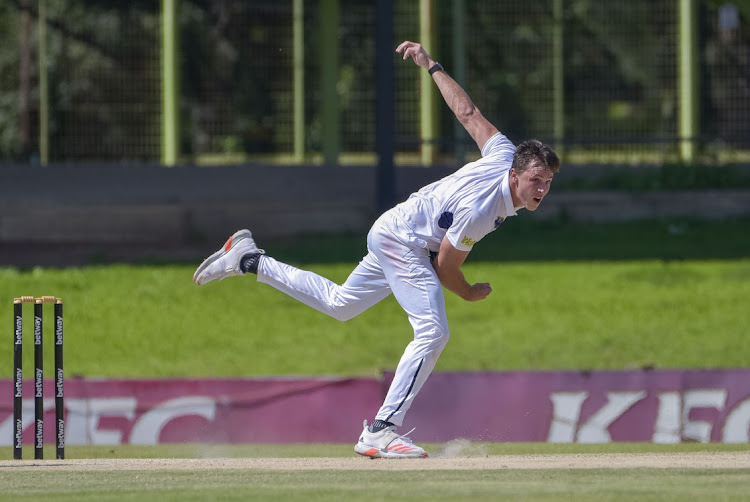 Bowler Migael Pretorius has been added to the Proteas squad for two Test series against Sri Lanka which starts at Centurion on Boxing Day.

The 25-year-old from Vereeniging‚ who has sent down 5,199 balls on the first-class circuit in 34 matches for his 121 wickets‚ was included as the 16th member of the squad on Wednesday.

His first national call-up is just reward for his outstanding start to the season and will fortify the team’s bowling attack‚ especially with Kagiso Rabada and Dwain Pretorius ruled out.

Pretorius hit the deck running hard as he started the campaign with best bowling figures of 7/102 against the Dolphins in their season-opener in November. Convener of selectors Victor Mpitsang said Pretorius had been knocking loudest on the Proteas door.

“We’re big on rewarding consistently good work and the player has done a lot to make a case for himself‚” said Mpitsang‚ who has been in the job for just over a month.

Even if he does not get to play against Sri Lanka‚ spending time in the squad with more established Proteas will be the right recipe for Pretorius to settle in nicely within the national team set-up.

“We hope this experience will be a great learning one for him and that this can serve as encouragement for players across the country‚ showing them that their chances may not be as far off as they think.”

A positive Covid-19 result forced the cancellation of an ongoing domestic match‚ a top-of-the-table 4-Day domestic series clash between the Titans and the Dolphins on Monday at SuperSport Park‚ the venue for the Boxing Day Test.

The Sri Lanka incoming tour hung in the balance last week after the integrity and security of Cricket SA’s bio-bubble came into question with as many as seven positive Covid-19 results that led to the scrapping of the ODI series against England.

But the Sri Lanka Cricket Board was given assurances by their SA counterparts that the two-Test series will go on under strict safety protocols.

Sri Lanka‚ coached by former Proteas mentor Mickey Arthur‚ will touch down in Johannesburg on Saturday.

The Proteas assemble in Pretoria on the same day and both teams will stay at the Irene Country Club near Centurion.

Arthur and Sri Lanka team health specialist Daminda Attanayake have already arrived in SA to further assess the situation and make arrangements for the team’s arrival.

The two-Test series is all the more important as it forms part of the ICC World Test Championship where the Proteas are desperate for points.

The series will remain on the Highveld as the second Test starts at the Wanderers in Johannesburg from January 3-7.

The Proteas right-hander takes over from Omphile Ramela, who has accepted an appointment to serve on the Cricket SA interim board
Sport
6 months ago

With the cricket world watching biosecurity during the Sri Lanka tour, we had better get it right
Sport
6 months ago