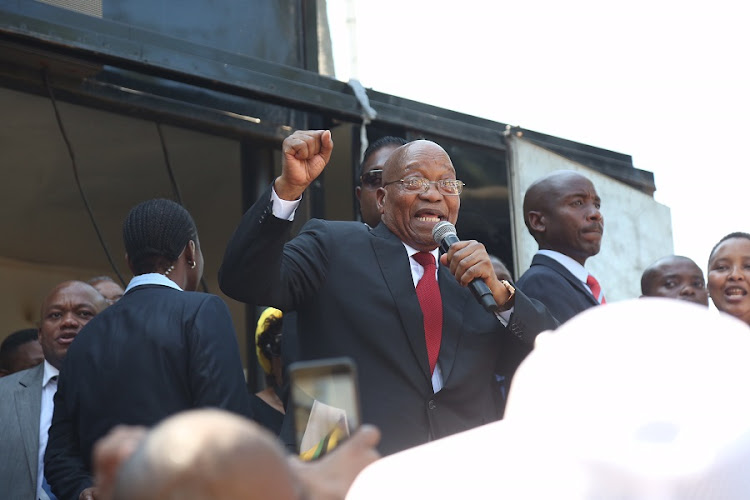 Former President Jacob Zuma addressing crowds after he appears in the Durban High court on 6 April 2018. Zuma's case was postponed to the 8th of June 2018. Picture: JACKIE CLAUSEN

Jacob Zuma loyalists in KwaZulu-Natal are said to be plotting a campaign to oust President Cyril Ramaphosa as party leader and split their votes in elections next year - voting for the ANC in the province but giving their national ballots to a party sympathetic to their cause should their plan to remove Ramaphosa fail.

Insiders say the Zuma backers were considering working with Andile Mngxitama's Black First Land First ahead of the polls as part of a bid to punish Ramaphosa for Zuma's early exit from office.

In addition, Zuma's close ally, Caesar Nongqunga, president of the Twelve Apostles Church in Christ, has formed a new political party, the African Transformation Congress. Insiders said Nongqunga formed the party with Zuma's blessing. He was not available for comment yesterday.

Church leaders held a meeting at Umgababa on the KwaZulu-Natal South Coast yesterday, where a letter written to the ANC informing the party of the decision to launch a new political organisation was read out.

Senior leaders in KwaZulu-Natal said several caucus meetings had been held in the province where a detailed plan to undermine Ramaphosa was hatched by Zuma's backers.

FERIAL HAFFAJEE: State capture - it isn't over. And you're still paying

The crudest phase of state capture may be over, we pray, but we will be paying for a long time.
Opinion
4 years ago

President Cyril Ramaphosa’s lawyers have withdrawn the appeal against the state-capture judgment, leaving Jacob Zuma to fight for costs on his own
National
4 years ago