Against expectations, Covid-19 is showing few signs that it is going away 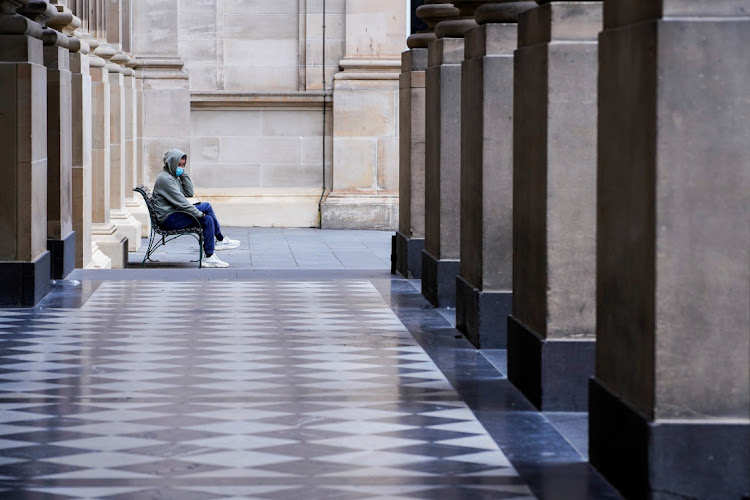 A lone man wearing a protective face mask sits at an unusually quiet State Library on the first day of a lockdown in Melbourne, Australia, in this July 16 2021 file photo. Picture: REUTERS/SANDRA SANDERS

How naive we were towards the end of 2020 to expect things would be easier in 2021. The worst of the pandemic would be over, we persuaded ourselves to believe, and life would start returning to normal as soon as the vaccine rollout began.

How wrong we were, not only in respect of the path the pandemic would take as new variants evolved, but especially concerning the world’s ability to get back to “normal” when it came to international travel, conducting business across borders and playing representative sport.

In many respects international sport has come both to symbolise the agonisingly difficult decisions to be made if we are to “save lives and livelihoods” — as the mantra has become — and to serve as a dress rehearsal for how this can be achieved in the real world.

Countries such as Australia and New Zealand were initially in a position to try to eradicate the coronavirus through strict lockdowns and vigorous contact tracing in the short term, with a view to being able to limit the economic and social damage and open up again in the medium to long term once vaccines were available.

And for a while it appeared they were succeeding, with mask and social distancing regulations being relaxed and sport not only being played but in front of crowds, while much of the rest of the world — not least SA — was still battling to suppress the rate of infection and at least limit the number of people being hospitalised with Covid-19.

Then came the Delta variant, and all such bets were off. It has become apparent that neither suppression nor “herd immunity” through vaccination is going to be the panacea many hoped they would be. The world is going to have to learn to live with Sars-CoV-2, just as the organisers of the Tokyo Olympics and British & Irish Lions rugby tour to SA had to cross their fingers and find ways to carry on while limiting risk as much as possible.

As these events have illustrated, this is no simple task. In the case of the Olympics, which had already been postponed from 2020, the price to be paid was the loss of public support — both in spirit and physical presence in the stadiums — and an undoubtedly diminished experience for athletes and fans alike. Not to mention the financial strain on the city of Tokyo as host, cost versus benefit being a contentious issue at the best of times.

Nevertheless, the Tokyo Olympics took place in the midst of a resurgence of the pandemic in Japan, and through strict protocols being enforced the various events took place and lessons were learnt without the games proving to be the superspreader many feared it could be.

In the case of the rugby, despite scares prompted by members of both squads testing positive for Covid-19 and having to isolate during the weeks before the first Test, the visitors finding themselves in the middle of an apparent attempted insurrection and the games being played in empty stadiums, the series went off without big incident. At least, nothing more than the tension, intrigue, finger-pointing, allegations of bias and despair at the state of the game that invariably accompanies tours by the British & Irish Lions.

At the same time, the Springboks played a warm-up Test against Georgia, and coach Levan Maisashvili — one of several in Georgia’s camp to have contracted Covid-19 after the game — is now in a critical condition in a Johannesburg hospital, having suffered complications that have damaged his lungs.

At the beginning of the pandemic it might have been argued that this was reason enough in itself to cancel all international tours, that just one life would be a life too many. Now, after almost 18 months of the Covid-19 blight with no indication of when or how it will all end, things are less clear. Perhaps walking the tightrope is our new normal.

DAVID BENATAR: Should vaccination be mandatory?

THERESE RAPHAEL: Is the UK an example to the US on how to live with the Delta variant?

MAX NISEN: Moderna has the firepower to go on the hunt but must think ...

MAX NISEN: Moderna has the firepower to go on the hunt but must think ...