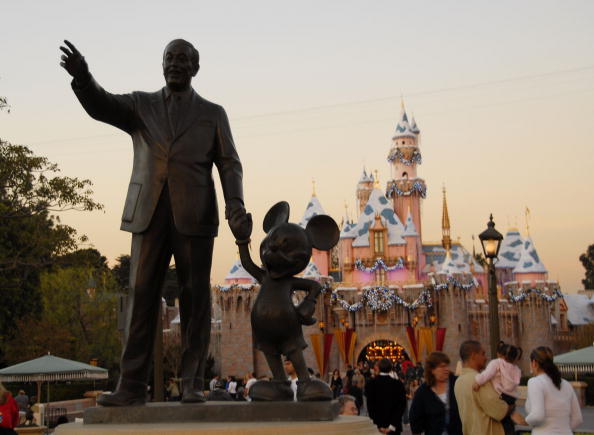 At a time when technology companies are getting hammered over consumer privacy issues, Disney is running the happiest police state on earth. Picture: BARRY KING/WIREIMAGES/GETTY IMAGES

Is the Delta variant costing Walt Disney? Analysts suspect that is the case.

Profit estimates for Disney’s division comprising its theme parks and resorts have dropped sharply in recent weeks as the highly contagious Delta variant of the Covid-19 virus spreads in areas with low vaccination rates and threatens to ratchet back travel demand. Some of the worst outbreaks have occurred in Disney World’s own state of Florida.

Disney joined a chorus of US companies over the last week that have responded to the Delta surge by announcing internal vaccine mandates, at least for non-union employees (it is working on union staffers next). As for theme-park customers, Disney also reinstated indoor mask requirements, regardless of vaccination status. When the US Centers for Disease Control and Prevention (CDC) temporarily lifted mask recommendations for vaccinated people in May — hours before Disney’s last earnings call — CEO Bob Chapek said it was good news for Disney, “particularly if anybody has been in Florida in the middle of summer with a mask on”. But the CDC reversed its decision in July.

As recently as May — after Disney was finally able to reopen its two California theme parks — the average analyst estimate called for more than $120m of operating profit from parks, experiences and consumer products for the latest quarter, according to data compiled by Bloomberg. Analysts now expect just $41m for that unit when Disney reports earnings on Thursday after the close of trading. Projections for the current period have also slipped as they await Chapek’s insights on the call later. This portion of the business includes Disney’s cruises, the first of which since early 2020 set sail this week to the Bahamas. (Disney has relaxed the cancellation fee schedule for sailings through January 2022.)

The worsening profit outlook may have to do with the higher costs many businesses have complained about this earnings season stemming from inflation and Covid-mitigation measures. But revenue forecasts for the parks have come down, too, suggesting concern that the recovery will hit speed bumps. So far, airport data do not point to many families second-guessing vacations, with 2.17-million travellers passing through transportation security administration checkpoints on Sunday, 82% of the total for the same date in 2019. That said, Morning Consult’s weekly tracker does reveal a modest pullback in the number of US adults who say they are comfortable visiting an amusement park, getting on an plane and travelling in general. And Southwest Airlines said it is seeing increased cancellations this month, citing the Delta variant.

Disney’s parks were the bright spot in the company’s last earnings report, as subscriber gains slowed for its streaming-TV platform Disney+. The bright spot this time may be a business that investors have trouble viewing as particularly attractive these days: the highly profitable cable-TV networks.

To recharge Disney+ subscriber growth, the company needs to streamline its various streaming brands in the US the way it has done overseas (activist investor Dan Loeb is urging something similar). Shareholders will only be happy to see it reach Netflix’s status, and they look to Disney’s parks to keep funding the journey — both financially and by stoking Disney fandom. The company is set to open its new Star Wars-themed luxury hotel next year. A two-day “space voyage” for two adults will cost about $5,000, Bloomberg Opinion’s Conor Sen writes. And you can bet plenty will be happy to pay that price.

Movie-theatre patronage is still way down from pre-pandemic levels and does not look like it will ever fully recover. (AMC Entertainment Holdings, the largest exhibitor, reported revenue on Wednesday that was 70% below the same period of 2019.) By releasing films such as Black Widow on Disney+ as they hit theatres, the company may cannibalise as much as 60% of its annual studio-related revenue, according to Bloomberg Intelligence analysts led by Geetha Ranganathan. It is why Disney is having to fight a lawsuit by Scarlett Johansson, the star of the latest Marvel film, who said her compensation was tied to box-office performance.

Still, Disney is in a good spot. While crowded venues are one less headache for Netflix to contend with during Covid, they are also an enduring profit pool that Netflix does not have. Eventually, they will bounce back as vaccines curb the virus. That so many families still see Disney World as a trip they must check off their lists — even as the price becomes less attainable for some — ultimately bodes well for Disney+.

As an escape from tedious Zoom meetings, not to mention gloomy news footage, you’ll probably be itching to find, and binge on, a great new series or ...
Life
4 months ago

Streaming giant gets off to a slow start in 2021 as pandemic subsides, but is confident gaming and new shows will keep audiences
Companies
4 months ago
Next Article