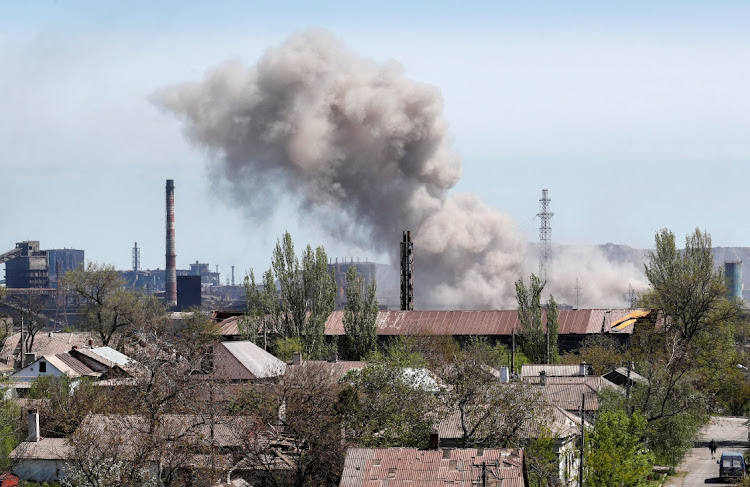 Bombing of the Azovstal Iron and Steel Works in the southern port city of Mariupol, Ukraine. Picture: REUTERS/ALEXANDER ERMOCHENKO

If you are a global CEO with a distributed supply chain, the war in Ukraine and its subsequent effects on the global economy and supply chains may have accelerated your thinking on how your business is structured.

The disruptions to global supply chains caused by Covid-19 are still very much being felt. Shipping congestion at Chinese ports, now combined with Russia’s war in Ukraine, risks a double whammy to the global economy.

The war in Ukraine matters for global markets because Russia and Ukraine are among the largest commodity-exporting nations in the world. A Dun & Bradstreet report (April 2022) showed that while Russia has fewer than 15,000 tier 1 suppliers, there are 7.6-million on tier 2.

According to the World Bank’s latest “Commodity Markets Outlook” report, the war in Ukraine has altered global patterns of trade, production and consumption in ways that will keep prices at historically high levels to the end of 2024.

Crises happen all the time, and companies factor contingencies into their plans. But when a crisis is as overwhelming as Covid-19 or as destabilising as the Ukraine war, it provokes fresh thinking.

Take this as a proxy. A month before the pandemic hit in January 2020, a survey of 3,000 US firms by Bank of America found that companies across industries — including semiconductors, car manufacturers and medical equipment — motivated by increasing tensions in China-US trade relations, had shifted or planned to shift at least part off their supply chains from current locations.

Companies in about half of all global sectors in North America declared an intent to “reshore”. That was before the full scale of the pandemic revealed itself. A 2022 survey by consulting firm Kearney (its reshoring index) found 78% of US CEOs are either considering reshoring or have done it already.

Ending trading relationships and supply chains, often built over decades is not easy nor cost- or risk-free. Whether near-shoring or reshoring, this is a major undertaking. Yet the cumulative disruptions over the past five years from geopolitical tensions and trade tariffs, the Covid-19 pandemic and disruptions in global shipping, and now the conflict in Europe, have exposed the deep interdependencies and vulnerabilities in global supply chains.

Meanwhile, technological advancements and falling costs in robotics and automation are enabling businesses to reshore their production activities back to home or near home markets.

In all of this, politics also matters. Policymakers in Western nations see that a transformation in the developed world’s supply chains is politically necessary. US treasury secretary Janet Yellen called for more resilient trade linkages and “friend-shoring”. Translation: limiting trade with China and Russia. This is already happening.

Big decisions are being made on renewable energy in European countries. Germany, which has the biggest dependency on Russian gas, is reluctant to impose further sanctions for fear of the recessionary effects, but the pressure is mounting. A Bundesbank report in April suggested the impact of sanctions on the German economy would be bad but not as bad as thought.

In the US there is the likelihood of new clean energy incentives. This would reduce emissions but also free up more US natural gas to flow to Europe to displace Russian gas. Decades of climate talks and rising evidence of the disastrous effects of global warming failed to result in a concerted effort to transition away from oil and gas. Maybe a war now will. As we might say in SA, it’s always impossible until it’s done.

The effect of the Ukraine war on SA is complex. Energy and food prices are rising. In other areas there is opportunity.  SA is, after Russia, the world’s second-biggest producer of palladium — a critical input into cars and electronics — and should see growth in demand. Big US companies such as Apple can no longer buy palladium from Russia and must find new sources. Exporters of metal commodities such as platinum and bauxite are likely to see their current account balances improve as prices rise.

Yet companies are making and will need to make binary choices in terms of with whom, where and how they do business. Witness the large exodus of Western companies from Russia. By some estimates SA has about R70bn worth of investment in Russia, with many marquee SA companies having links — direct and indirect. Will pressure be exerted on these companies?

• Rynhart is senior specialist in employers’ activities with the International Labour Organisation, based in SA.

GARY RYNHART: Maybe things are not as bad as we tend to think they are

Industry will return, but probably in different ways, and sustainability and resilience will loom large
Opinion
4 months ago

Ceará, one of the poorest Brazilian states, rapidly raised basic literacy standards by following their approach
Opinion
6 months ago
Next Article