A lesson the ANC learned well from the Soviets: scapegoat the Jewish state 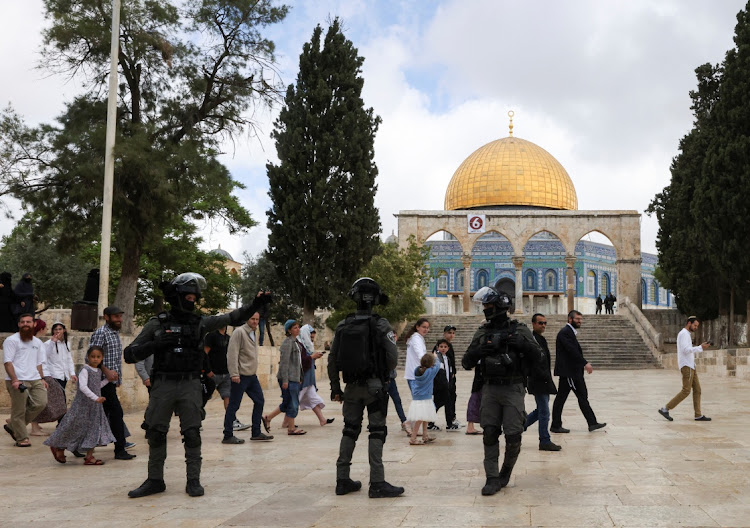 Israeli security forces secure the area at the compound that houses Al-Aqsa Mosque, known to Muslims as Noble Sanctuary and to Jews as Temple Mount, in Jerusalem's Old City on May 5 2022. Picture: REUTERS/AMMAR AWAD

Something is rotten in the state of our foreign affairs. The government remains “neutral” on Russia’s unprovoked war on Ukraine, but is predictably zealous in condemning Israel’s defensive acts to protect her citizens from Palestinian violence. Why the double standard? What is the policy agenda? Where is the consistency in foreign relations?

SA has abstained from crucial UN votes condemning Russia’s egregious actions, but is vociferous in condemning Israel for defending herself from terrorism while attempting to minimise the deaths of innocent civilians.

When Israel sneezes, or simply breathes, the otherwise supine department of international relations & co-operation launches into a full-scale verbal assault, outdoing even Israel’s enemies in its devotion to the anti-Israel cause.

When serious human rights abuses happen daily on SA’s doorstep and within this country, we hear crickets from our government and ministers. Yet when a home-grown beauty queen wants to participate in the Miss Universe contest happening in Israel — as is her absolute right as Miss SA — senior government officials from the minister of sports, arts & culture to the transport minister, do everything in their power to prevent her from going. And fail, embarrassingly. She defied them and went on to take second runner-up on the global stage, with universal support.

It must be said: the foreign relations policy of our government is an embarrassment to most South Africans and international observers. When briefing the media about SA’s implicit support for Russia in its war against Ukraine, international relations & co-operation minister Naledi Pandor followed typical government policy on many international relations issues: deflect, obfuscate and blame Israel. This is something the ANC learned well from the Soviets: scapegoat the Jewish state.

Pandor continued to lecture the audience on her lofty vision for the world order. Why rush to sanction Russia for launching an unconscionable war against a sovereign neighbour when Israel, legitimately defending its civilians against thousands of unprovoked rockets launched from Gaza, is not sanctioned? “It’s double standards,” she triumphantly concluded, the grotesque irony of her own hypocrisy lost on her.

When Israeli police entered the al-Aqsa mosque to restore order and freedom of worship during Ramadan after Palestinian rioters threw rocks and fireworks at the holy site, incited violence against Israelis and threw rocks towards the Mughrabi gate to where Jews pray at the Western Wall, the department’s head of public diplomacy, Clayson Monyela, tweeted: “Will the aggressor in this case face international condemnation? Will sanctions follow? Any [UN Security Council]/General Assembly resolutions? Any action? #DoubleStandards.”

Indeed, will the real aggressor face condemnation? Is the SA government really so blind to the reality happening on the ground? There is something rotten with SA’s foreign policy when its main international fixation is with Israel, and it deliberately misrepresents the facts. In this latest incident, Israel’s actions freed thousands of Muslims to continue prayers at the mosque in peace, and maintained the freedom of worship for Jews, Muslims and Christians at their respective holy sites in Jerusalem during Passover, Ramadan and Easter. The SA government’s crass hypocrisy and demonstrable double standards are a shame to behold. The question is, why?

Just recently the foreign ministers of Egypt, Morocco, the United Arab Emirates, Bahrain, the US and Israel travelled to the Negev desert in southern Israel to create a forum to further the historic Abraham Accords, which normalised relations and created a warm peace between Israel and the Arab world. This metamorphosis within the Arab world after decades of hostility towards Israel has opened up new possibilities and opportunities unimagined until recently.

Flights to and from Israel can now cross Saudi Arabian airspace, saving hours of airtime and fuel, and trade between Morocco and Israel has increased tenfold in two years. This is just the beginning of a new rapprochement, of which SA needs to be part.

SA has relations with and engages regularly with these Arab countries, but prefers to remain “holier than the Pope” on matters relating to Israel. When the Arab world and Turkey openly show support for Israel and condemn terror against Israeli civilians, SA takes the opposite track and condemns Israel for defending herself against terror attacks.

Why is SA at odds with Israel’s Arab neighbours? When the Arab world deploys Israeli technology to solve problems such as providing water in drought areas, or implementing cybersecurity for critical infrastructure, SA undermines efforts for its people to benefit from these solutions.

When Israel gained observer status at the AU in 2021, reflecting the importance many African countries place on working with Israel for the benefit of their own populations, the SA government tried mightily to remove it as an AU observer. The department of international relations & co-operation wasted significant resources on this negative and ultimately futile endeavour. Its actions simply embarrassed our country, while the AU reaffirmed Israel’s observer status this year.

Why the hostile and ignominious attitude of our government towards Israel, which places us out of step with the rest of the world?

The golden years of Nelson Mandela’s SA have been squandered. We had the moral capital to leverage our foreign policy and promote good in the world, based on our own unique story of transcending enmity and promoting peace between peoples. SA could be an important role player in bringing Israelis and Palestinians together, and working to find solutions in a seemingly intractable conflict. Instead, it has become a spoiler.

The Abraham Accords have proven that innovative and breakthrough diplomacy is possible, and peace can be achieved. Until SA stops propping up dictatorships, voting in international bodies to support human rights abusers, taking the wrong side on international conflicts and thrashing Israel at every turn, our credibility will continue to spiral down the drain.

Something is rotten with our foreign policy, but it is never too late to fix it.

• Polovin is national chair of the SA Zionist Federation.