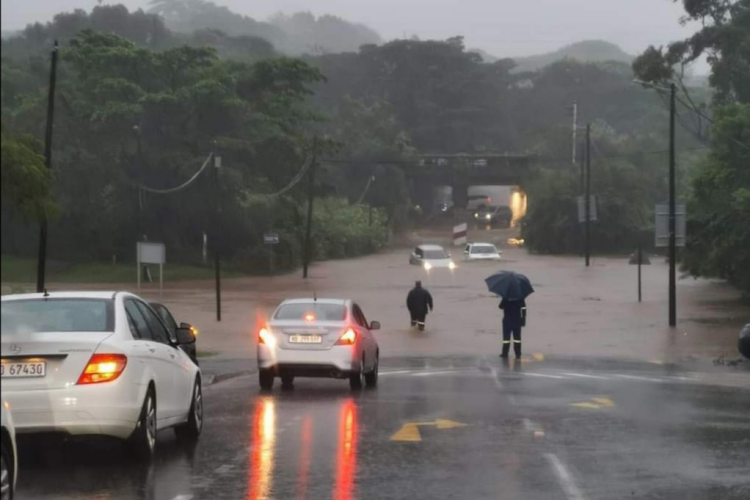 Flooding in Amanzimtoti, south of Durban, on Monday morning. Picture: VIA FACEBOOK.

It was Easter weekend three years ago when Durban was hit by more than  165mm of rain, the heaviest 24-hour downpour since 1985. Just three years later, on the eve of the Easter holiday, we have beaten that record.

Durban is one of the most economically significant cities in Africa, and as climate change takes hold, figuring out how to tackle the increasing frequency and severity of these events is vital.

The Port of Durban is of utmost significance to the SA economy, with 60% of all imports and exports passing through it. This week’s floods damaged road-to port infrastructure badly. The N3 highway, which connects Johannesburg, the country’s economic hub, with the port, has been affected, as has the N2 highway that runs up the Indian Ocean coastline.

The port itself has also been heavily affected. Transnet suspended all shipping operations on Monday night, and images circulating on social media show shipping containers strewn about.

The road and port damage will lead to a sharp rise in inflation, as many of the goods or inputs for the goods we consume will now be subject to bottlenecks at the port. This was the case last year when Western Europe had  unprecedented rain and flooding. Cargo could not be moved in Germany, Belgium and parts of Switzerland, Luxembourg and the Netherlands due to damage to railway lines. As a result, German steel manufacturing giant Thyssenkrupp was unable to get raw materials, and that had knock-on consequences for the automotive and domestic appliance manufacturing industries.

Key economic sectors that rely on the Port of Durban — such as agriculture and mining — will be hit hard. According to the US agriculture department, more than 80% of the grain industry’s inputs, such as fertiliser, fuel and equipment, come into SA through the Durban port and are then transported by road. Food security may also be affected. More than 80% of SA’s wheat imports pass through Durban.

Given the city’s geography and topography, rapid and efficient government intervention is critical. New Orleans is a cautionary example of what can happen if things go wrong — and an example of the costs and efforts required to address repeat disasters.

In 2005, Hurricane Katrina hit New Orleans, leaving 80% of the city under water and killing 1,800 people. The city lost over 90,000 jobs and more than $3bn in wages. The storm caused about $81.2bn in damages. As businesses and households realised their own vulnerability to such climatic shocks there was an exodus from the city. More than half the city’s population left — leaving just 230,000 people behind.

Ahead of Hurricane Katrina New Orleans had a high rate of inequality and the poorest were most vulnerable to flooding, due to poor quality housing and high levels of homelessness. In 2000 New Orleans was the sixth poorest of the 100 largest American cities.

While Durban and New Orleans each face their own particular set of geographical challenges, understanding what New Orleans did offers some insight into the cost and process needed to implement long-term adaptation.

After Hurricane Katrina the US government decided to strengthen the resilience of the city through a risk reduction initiative. Through co-ordinated efforts the city built a $14.5bn system that included 560km of gates, flood walls and levees that would increase protection against future storms and flooding. The system was completed 13 years after the hurricane.

While New Orleans’s exposure to floods is still high, confidence has inched back up on the back of increased resilience. The population grew from 230,000 in 2006, the year after Hurricane Katrina, to 369,000 in 2012. By 2019 it had grown to 390,000, and businesses returned. Future storms are inevitable, but the city is somewhat better equipped to handle them.

Back to Durban. To mitigate the human and economic impact of this wave of flooding in the short to medium term, the government needs to efficiently assess and respond to the damage. Speed is key. Much of the damage (amounting to over R1.8bn) that resulted from the catastrophic floods of April 2019, including large landslides, collapsed buildings, sinkholes and significant damage to informal settlements, have yet to be repaired.

Delays in co-ordination have prevented a timely response. In addition, going forward strengthening public financial management and reducing scope for leakages is critical, to ensure the financial support that is earmarked for the disaster response is used for this purpose and that maximum value for money is attained.

In the longer term we need to rethink what systems are in place — such as climate-resilient infrastructure, corruption-proof emergency procurement and climate risk insurance. No doubt  implementing a more comprehensive risk reduction system is costly, but responding to these catastrophic floods every two years will cost more, both monetarily and also in terms of fatalities and human capital losses through loss of schooling and stunting.

GRACELIN BASKARAN: Oil is set to go through the roof as it barrels towards record

In one of the largest energy supply shocks yet, forecasts show crude is likely to top $200 a barrel
Opinion
4 months ago

GRACELIN BASKARAN: Basel III weathered Covid-19 but now the climate heat is on

Design is based on historical data that is not adequate anymore for the increasing severity of global warming, writes Gracelin Baskaran
Opinion
5 months ago