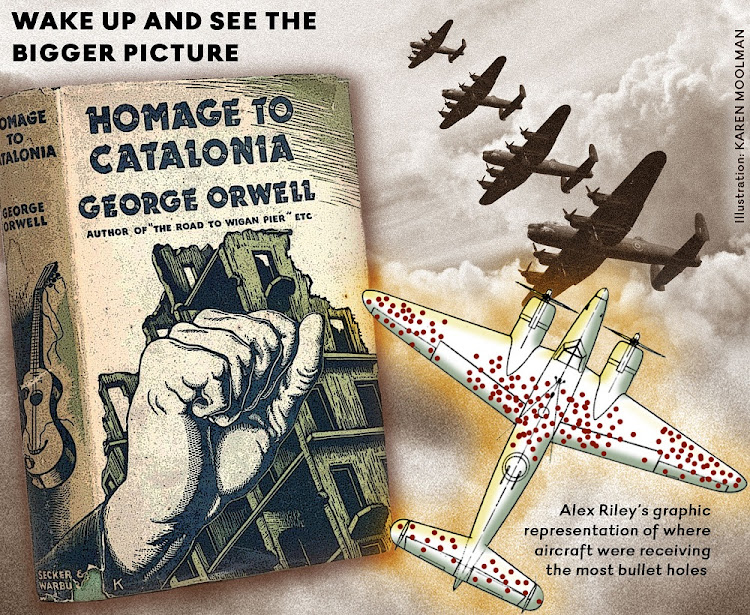 In Homage to Catalonia, George Orwell (1938) describes the cognitive dissonance he experiences in returning home to England after fighting in the Spanish Civil War. He writes of “railway cuttings smothered in wild flowers ... and streams bordered by willows”.

“Earthquakes in Japan, famines in China, revolutions in Mexico? Don’t worry, the milk will be on the doorstep tomorrow morning, the New Statesman will come out on Friday.”

Yet, in foreseeing World War 2 Orwell had an uneasy sense of foreboding, with all of England in a “deep, deep sleep ... from which I sometimes fear that we shall never wake till we are jerked out of it by the roar of bombs”.

Orwell’s passage points to a human tendency to pretend things away, until it is too late: the “deep, deep sleep of England” or any other country for that matter. This is as true in 2022 as it was almost 100 years before in 1938 — and 100 years before that, and so on.

Dissonance and disconnect is an entrenched human trait. As Noah Smith wrote in his Substack newsletter last week, the post-Korean War experience of the past 70 years (1953) and, even more so, the 30 years since the collapse of the Soviet Union (1991) has stabilised international borders, legitimised the rights of small countries, and generally suppressed major interstate conflicts.

Things have got better, safer, calmer, and more secure for many. Life expectancy at birth was 64 years in 1991. Today it 73 years. Over the past 30 years global per capita income has doubled. This “long peace” has been good for capital markets and investors.

Vladimir Putin’s invasion of Ukraine ends the long peace. As Smith notes, the idea that great powers are guarantors of the inviolability of weaker countries’ borders is no longer a universal norm. The US does not have the high ground or the influence to prevent other great powers — in this instance, Russia — from having their way with weaker countries. For the moment that means Ukraine; others, including Latvia, Lithuania, Estonia, and even Poland, could follow.

A new iron curtain could be even more dangerous than that built by the Soviets — spanning Europe, the Middle East and Asia. For those railing against government as an organiser, regulator, co-ordinator, and sometimes overbearing protector, Putin’s invasion shows there is nowhere to hide from authoritarian regimes.

The digital world and cryptocurrency do not allow people to simply check out. Even if governments bungle, overreach, hold lockdown garden parties, fall up aeroplane stairs and get much wrong, Russia’s attack makes it clear that you can run, but you cannot hide. Bitcoin will not save us from bombs.

The global economy and financial markets have sleepwalked through this growing geopolitical risk. Russia’s invasion of Ukraine is likely to break this pattern. It will bring higher price inflation, lower economic growth and disruptions to financial markets as supply chains are dislocated and sanctions start to bite.

The effects of sanctions on Russia are material for the world economy in the production and prices of important inputs — including energy, metals, food and fertilisers. More than these short-run economic impacts, the world’s attention is also violently pulled away from climate change, decarbonisation and global inequality.

These are issues that demand action. Left unattended, the costs go even higher. Investments need to be managed for this new, permanent risk, and we get clues from mathematician Abraham Wald on how to close cognitive dissonance and manage the investment risk of being jolted awake.

During World War 2, Wald was responsible for advising the US military on how to save aircraft based on the distribution of bullet hole damage to planes that returned from their assignments in Europe. In retelling the story in 2020 Alex Riley notes the military wanted to reinforce the plane where most of the bullet holes were being received. Wald disagreed.

His mathematical training led him to recognise that planes were also getting hit on the nose, engines, and rear body. But those planes were not making it back because they had crashed. The military was only assessing the survivors. Wald advised the military to armour the nose, engine and rear body. The wingtips and mid-body had proven their ability to take hits and needed no reinforcement.

By challenging assumptions Wald closed the disconnect between beliefs and reality. By looking at the whole schema — the big picture — he identified key risks and threats to build a portfolio of planes that were fit for the circumstance of war. Wald was wide awake.

The invasion of Ukraine is a shock to the world order. It will have far-reaching political, social, and economic consequences. The sudden disconnect presents investors with risks not seen since the cold war. And it profoundly challenges established beliefs — also called assumptions — about financial market drivers and dangers.

We are well advised to heed the words of Orwell and lessons of Wald, and recognise the risks we face in being “jerked out of a deep investment sleep” by the roar of Russian bombs.

• Dr Saville is an investment specialist at Genera Capital and professor at the Gordon Institute of Business Science.

Bloomberg Economics examines how the conflict could impact growth, inflation and monetary policy.
News
4 months ago
Next Article