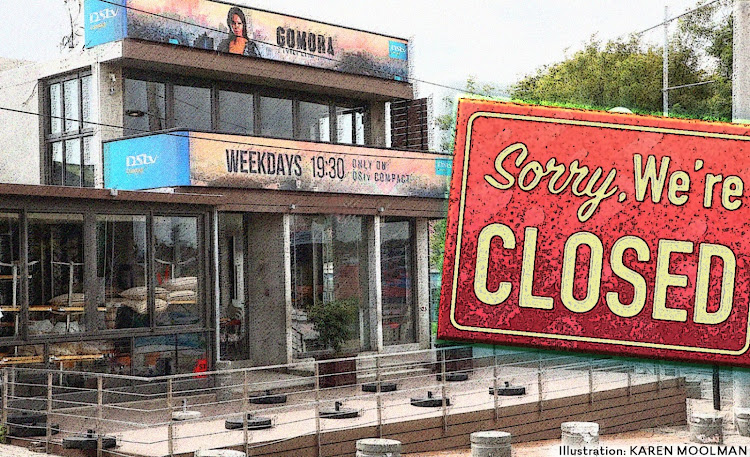 Many businesses in the SA hospitality industry take out business-interruption insurance to cater for closures resulting from a disease. Yet when they approached insurers to claim on their policies due to closure during the pandemic, short-term insurers opted to decline the claims, arguing that the policies did not provide coverage for this contingency. In one fell swoop a sector crucial to the SA economy faced, and is still facing, financial ruin. Illustration: KAREN MOOLMAN

Businesses have been hit hard by the Covid-19 crisis lockdown and the fear many people about using services seen to carry a high risk of infection. While information on the pandemic accumulated rapidly by March, there was still significant uncertainty about areas conducive to rapid transmission, necessitating cautious early responses on the part of governments around the world.

However, many businesses in SA anticipated an epidemic or pandemic by taking out business-interruption insurance to cater for closures resulting from a disease. Yet when they approached insurers to claim on their policies a raft of short-term insurers opted to decline the claims, arguing that the policies did not provide coverage for this contingency.

The hospitality industry — hotels, lodges and restaurants, comprising about 50,000 small and medium-sized business in SA — in effect had the rug pulled out from under their feet. Not only had the government expressly closed their businesses without warning, but the insurance coverage they had purchased for just such a contingency was declined en masse.

In one fell swoop a sector crucial to the SA economy faced, and is still facing, financial ruin. The hospitality industry is central to tourism, both international and domestic, which traditionally contributes about 8.6% to GDP. It generates about R120bn in foreign currency and supports about 1.5-million jobs. It is a mature industry that contributes significantly to the resilience of the domestic economy.

Internationally, governments go to great lengths to ensure  temporary crises do not result in the permanent disintegration of  strategic industries that generate sustainable jobs, economic growth and tax revenue. But the SA government faces severe capability constraints and has been unable to  support the economy properly through the Covid-19 crisis.

This has pretty much left survival up to private actors and arrangements. While the hospitality industry took appropriate precautions against an epidemic so as not to rely on the government, SA’s well-heeled financial services sector has in effect raised the drawbridge and released crocodiles into the moat.

The question of whether this nonpayment is legally defensible is now before the courts. One case, between Guardrisk and Café Chameleon, successfully resolved for the claimant but was immediately appealed. Other cases involving Santam and Hollard will land soon.

This industry-wide nonpayment of claims also attracted the attention of the industry regulator, the Financial Sector Conduct Authority (FSCA), which intervened to get the insurers to make interim payments to the distressed claimants pending finalisation of the court processes. Clearly upset, the FSCA argued that “insurers cannot use the lockdown as grounds to reject claims”.

While the industry complied with this requirement for an “interim” payment, it did so without acknowledging liability. This raises the question interim to what? “Cognitive dissonance” is on its way becoming a new actuarial term.

Nonpayment on a class of these business interruption policies is largely reliant on the argument that the lockdown, rather than Covid-19, closed hotels, lodges and restaurants. The policy wording applicable to hospitality and leisure policies refers to a “notifiable disease occurring within a radius of 40km of the premises ... notifiable disease shall mean illness sustained by any person resulting from ... any human infectious or human contagious disease an outbreak of which the competent local authority has stipulated shall be notified to them ... excluding acquired immune deficiency syndrome (Aids) or an Aids-related condition”.

A notifiable condition is provided for in the National Health Act. In terms of this legislative framework, notifications are provided to the national government in a process managed by the National Institute of Communicable Diseases (NICD).

On its website, the institute clarifies that “notifiable medical conditions are diseases that are of public health importance because they pose significant public health risks that can result in disease outbreaks or epidemics with high case fatality rates both nationally and internationally”.

So the purpose of notification to a national authority is to provide immediate detection of serious diseases that could rapidly expand into epidemics. It is for this reason that the Sars-COV-2 virus, which results in the disease Covid-19, is notifiable.

Notification is not required to generate glossy publications or PowerPoint presentations. It is expressly to provide timely information for the government to determine a response. Government action is integral to the act of notification.

Importantly, one of the most common government responses is to restrict access to an area in which a disease outbreak has occurred. The speed and extent of the response depends entirely on the nature of the disease. The more efficient the spread, the wider the scope of the government response. Once detected through notification, governments also attempt to trace the movements of an infectious individual, which can include areas far removed from the point of detection.

It is for this purpose that the legislation is national and the reporting authority national. Epidemics don’t respect local, provincial or national government boundaries. National governments eliminate spillover problems of various forms resulting from the constrained jurisdictional reach of local government structures.

The reference in the policy wording to “infectious” and “contagious” diseases is also worthy of note. The former refers to the transmissibility of a disease and the latter to spread from person to person.

Seen together with notifiable, the policy wording in effect states that it will pay out for business interruptions due to the occurrence of a disease with a high case fatality rate that transmits efficiently from person to person within the vicinity of the business and that has been reported to national government to determine a response, which includes restricting access to the area in which the business is located.

It is also worth noting that any infectious and contagious disease will spread most efficiently through international travel. The first sites of infection will therefore be in the hospitality sector. One of the first responses of the government will be to interrupt this source of transmission through border closures and restricting access to the hospitality industry and the movement of travellers from one area to another.

The initial testing criteria for Covid-19 reflected this by restricting tests to people who had been travelling internationally or who had been in contact with someone who had. One can therefore excuse those thousands of businesses that took out policies with this wording for thinking they were covered for a pandemic such as Covid-19. The extent of the business interruption resulting from the disease surprised the short-term insurance industry and their reinsurers and caused them to carefully scrutinise the wording of their policies to locate a loophole.

A simple question therefore arises: if these insurance policies do not pay out in this scenario, in what scenarios do they pay out? And were these truncated scenarios made plain to the businesses that purchased the policies?

If this apparent reinterpretation of the policy wording is allowed, it would appear that instead of a concrete obligation the wording of insurance policies reflects little more than a rough guide for insurers to use and interpret at their discretion when it suits their interests at the time a claim is submitted.

• Van den Heever is chair in the field of social security at the Wits School of Governance.

MARK BARNES: It’s survival of the fittest as the unproductive die out

MARK BARNES: It’s survival of the fittest as the unproductive die out