The bosses ‘are playing golf in Mauritius, in Dubai, in different countries, while we are working in the mines, and not getting anything’ 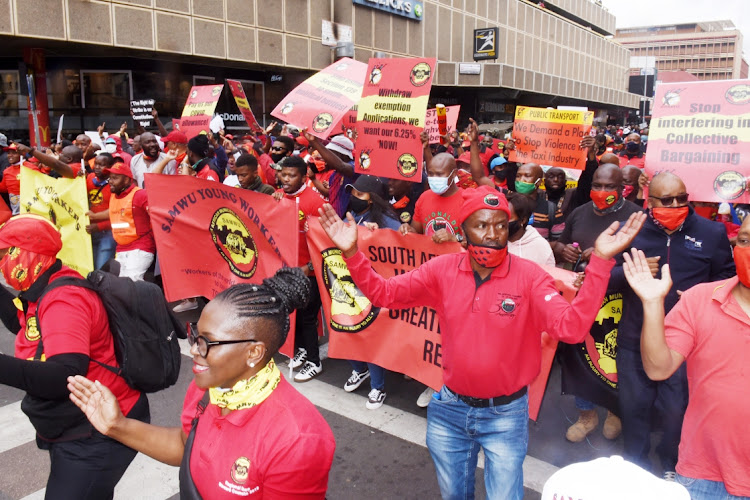 Members of Cosatu are shown protesting against plans to trim the public sector wage bill in this file photo. Picture: FREDDY MAVUNDA

Cosatu, which held a national march against job losses and retrenchments on Thursday, called on all mines in the country to be “shut down at some point” to force mining bosses to respond positively to workers’ demands.

The mining sector, however, is one of the few industries that emerged unscathed from the economic crisis spawned by Covid-19, with auditing firm PwC describing 2020 as a “banner year for the mining sector”.

It said the sector, which continues to reap the benefits of higher commodity prices through improved revenues for the government, emerged from the pandemic in “excellent financial and operational shape”.

Mining contributes about 9% to GDP, with about 500,000 people directly employed by the industry.

The Cosatu march was against corruption, job losses, retrenchments, gender-based violence and attacks on collective bargaining.

The labour federation, which is an alliance partner of the governing ANC, delivered a list of demands to the offices of Gauteng premier David Makhura and the Minerals Council SA (MCSA) in the Johannesburg CBD.

Addressing Cosatu members outside the MCSA offices, Cosatu Gauteng chair Amos Monyela lashed out at the mining bosses for allegedly “dismantling” centralised collective bargaining in the sector, which allowed industry bosses and worker representatives to negotiate wages and other conditions of employment under one roof.

Monyela said the bosses have now “decided that they are going to dismantle centralised collective bargaining, making sure that mineworkers negotiate differently”.

“They have taken this cue from the state. Once the state shows a sign of disrespecting collective bargaining, everybody follows,” he said.

Cosatu public-sector unions are challenging the Treasury decision, which was upheld by the labour appeal court in December 2020, not to implement the final part of a three-year public-sector wage deal, at a cost of R38bn, for lack of money.

Pointing to the MCSA building, Monyela said: “You can see this [building] is not operational, they [bosses] are playing golf in Mauritius, in Dubai, in different countries, while we are working in the mines, and not getting anything. The little that we have they are now wanting to take.”

He said it was time to take the “war” to industry owners, which he characterised as “greedy, fat cats”.

“We are going to give them a memorandum. Post giving them a memorandum, NUM [National Union of Mineworkers] is going to make sure that all the mines shafts, if they [do not agree] to centralised collective bargaining, be closed at some point so that the demands of mineworkers are responded to positively,” he said.

MCSA senior executive for public affairs and transformation Tebello Chabana said the council took workers’ rights seriously. “I’m not in Mauritius, we are working, the reason we are not in the building is because we are still under lockdown,” he said.

“But I can assure you … that we take this [list of demands] quite seriously.”

He said that while the other economic sectors registered job losses in the country, “we are the only sector … that actually improved employment”. He said the sector also improved the government’s kitty through its tax contribution. “I think those things are important,” Chabana said.

Mining exports totalled R600bn in 2020, according to multinational lender HSBC, which forecasts a trade surplus equal to 6.1% of SA GDP in 2021, better than a previous forecast of 4.7%.

Cosatu to go on national strike against corruption and job losses

The federation plans to strike against corruption, job losses, retrenchments, gender-based violence and attacks on collective bargaining
National
10 months ago

Cosatu president urges members to support ANC at the polls

While it has differences with the party, it is a better option as the DA will scrap ‘progressive’ labour laws
Politics
10 months ago
Next Article

WATCH: How the mining sector can contribute to rebuilding economy

WATCH: How the mining sector can contribute to rebuilding economy