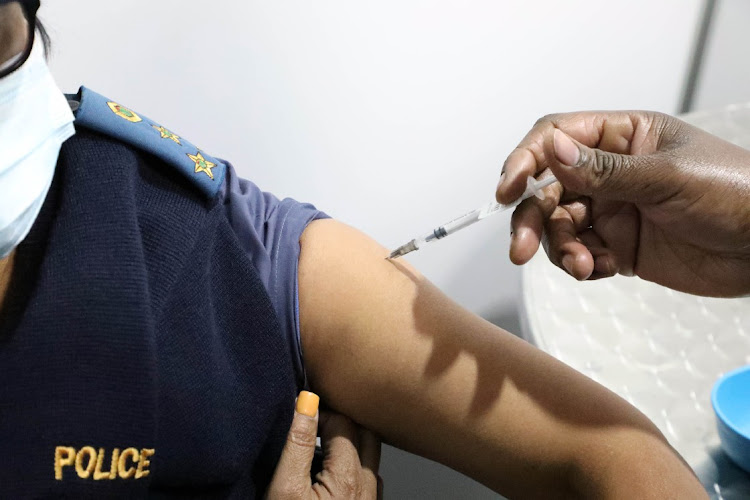 A member of the police is vaccinated in Soweto on July 5. Picture: ANTONIO MUCHAVE/SOWETAN

In a push to accelerate SA’s coronavirus vaccination programme, the government has committed to reimbursing private sector providers for the costs of inoculating people who do not belong to medical schemes.

The move is expected to boost numbers at private sector sites, where demand has dwindled in recent weeks after eligible medical scheme members had quickly taken up the offer of a vaccine. It will also help compensate for most public sector sites not operating on weekends.

“This really opens the taps to a much broader rollout,” said Business for SA’s (B4SA’s) Ronald Whelan, chief commercial officer at health and life insurer Discovery. “Until now we have not been able to bring online the full capacity of private sector sites. Demand from the over-60s dipped, and for the past three weeks there have been no-show rates of up to 80%. It was devastating to see because there was stock and staff on hand,” he said.

“We support efforts to ensure vaccination centres are full, and to reach younger cohorts as quickly as possible,” he said.

SA received several large shipments of Pfizer and Johnson & Johnson (J&J) vaccines in the past fortnight that significantly bolstered supplies for July, Whelan said. These include 1.5-million doses of the single shot J&J vaccine, 1.4-million doses of the two-shot Pfizer vaccine from the international vaccine financing vehicle Covax, and 1.3-million doses directly from Pfizer. So far, 5.8-million of the 30-million Pfizer doses secured by the government have been delivered to SA.

In a circular issued to the industry on July 1, department of health director-general Sandile Buthelezi said the government would reimburse private sites for the vaccination of uninsured people, including walk-ins, provided they were eligible for vaccination and had registered on the government’s electronic vaccine data system. Private sites would be provided with a credit note to cover the cost of the vaccine and an administration fee, he said.

“It is a very clever mechanism, because it means there are no massive transactions. The credit note will be offset against invoice payable to the vaccine distributors appointed by the government,” Whelan said.

The government opened vaccine registration to people over the age of 50 on July 1. It initially said vaccination for this age cohort would only begin on July 15, but has already begun scheduling appointments for the over-50s this week.

As of Sunday evening, 3.3-million vaccine doses had been administered.

In a separate development, the department of health announced on Sunday that it has made provision for special groups and individuals not currently eligible for vaccination to receive shots. These include ministers, deputy ministers, premiers and MECs; SA diplomats and their families who have been posted overseas who wish to be vaccinated when they are in SA; individuals who need to travel outside SA, for reasons that include business or study commitments, representing SA at sporting events, and seeking medical care; and individuals nominated by the president, health minister or health director-general. Foreign embassy staff would be vaccinated in line with the national protocol.

The president needs advisers who know what is going on, not members of The Complacency
Opinion
1 month ago
Next Article