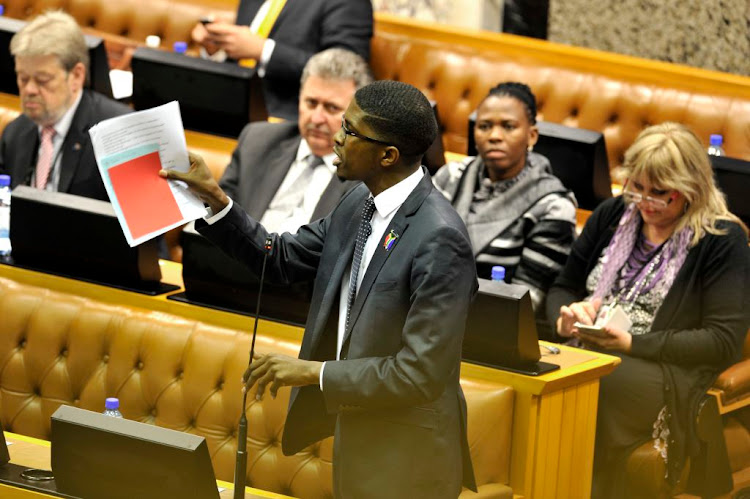 Scopa chair Mkhuleko Hlengwa has been approached by ANC MP Mervyn Dirks with regards to the misuse of state funds and perjury by President Cyril Ramaphosa. Picture: LERATO MADUNA/GALLO IMAGES

An ANC MP has taken aim at President Cyril Ramaphosa, wanting him to answer to allegations that state funds were used for party campaigns.

Mkhuleko Hlengwa, chair of parliament’s finance watchdog, the standing committee on public accounts (Scopa), confirmed on Sunday that ANC MP Mervyn Dirks would be given a chance to present his case for Ramaphosa to be summoned over alleged misuse of state funds for party work.

Dirks wrote to Hlengwa asking that his committee summon Ramaphosa after a leaked recording of an ANC national executive committee meeting at which the president spoke about the use of state money for certain campaigns in the lead-up to the 2017 ANC elective conference.

"One of the officials said as these people from the state security [agency] testify [at the state capture commission], one of the officials said soon they will be revealing about how money was used for some campaigns, and I said I would rather they say you got money from this business for CR17 than for the public to finally hear that their public money was used to advance certain campaigns," Ramaphosa could be heard saying in the recording.

On Sunday, Hlengwa said the committee would give Dirks a chance to state his case before taking a decision on whether to summon the president. He said he had advised various members of the committee, from different political parties, about Dirks’s letter. He said the matter would be heard when parliament came back from recess.

"Whenever a member writes to us on any matter, it receives our attention. The member is given an opportunity to address the committee and make representations. The committee will then decide how we go forward with the matter. "But the matter is receiving attention as any other matter," said Hlengwa.

He said he had not yet informed the office of the president about the letter, because the committee still had to take a decision on how to proceed.

Hlengwa could not give a specific date on when the committee was expected to sit and discuss the matter.

Ramaphosa’s spokesperson, Tyrone Seale, could not be reached for comment.

In his letter, Dirks further implied that Ramaphosa might have committed perjury when he failed to alert the Zondo commission to his knowledge of the allegations of abuse of state funds.

"This statement by the president [from the leaked audio] has far-reaching implications for our fight against corruption and malfeasance," he wrote.

"Furthermore, the president appeared before the Zondo commission under oath and withheld this damning information. Does this amount to perjury? The admission by the president of his knowledge of corruption and his refusal to divulge it will definitely make the final state capture report questionable and render it as not worth the paper it is written on," said Dirks.