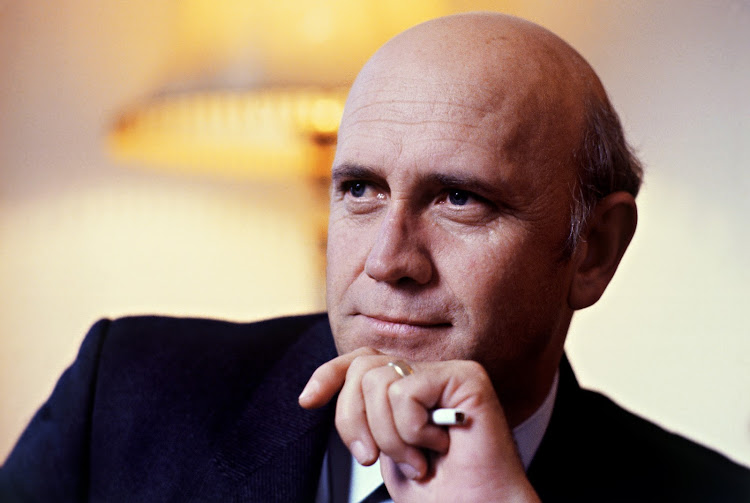 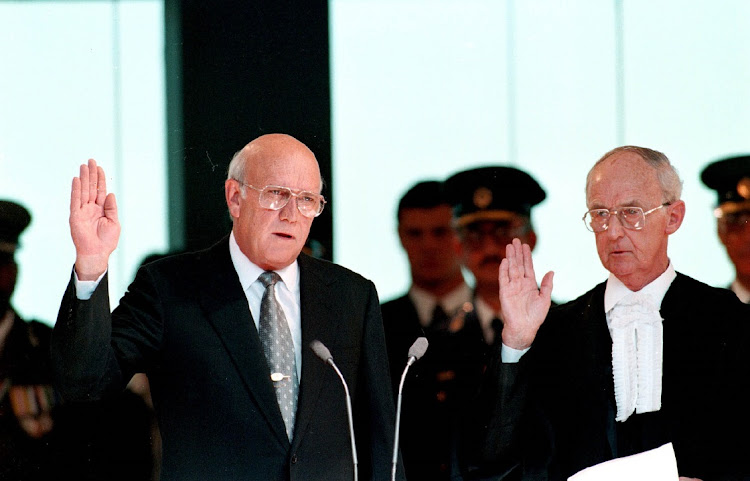 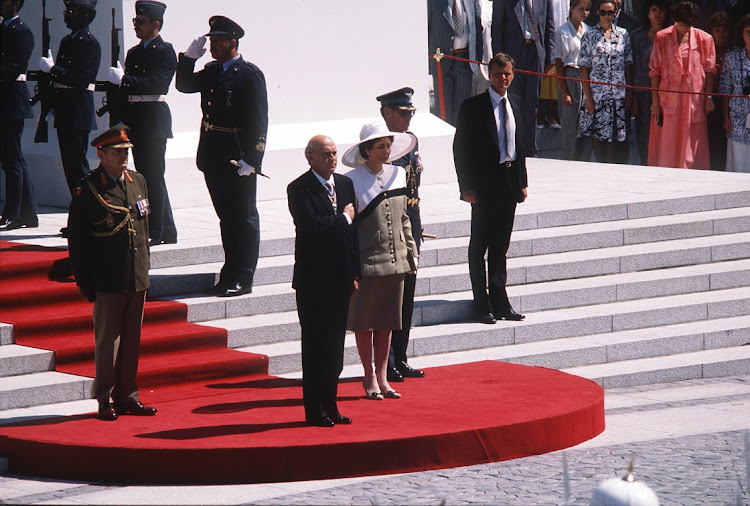 Three of the truly significant societal transitions in the 20th century were mainland China’s move to a market economy in the late 1970s, the collapse of the former Soviet bloc into whatever that part of the world has since become in the late 1980s and apartheid SA abandoning white minority domination in favour of a participatory democracy with equal rights in the mid 1990s.

Jenkins’ main point was that a calculated decision by an oppressive regime to change its ways or relinquish power, often plays a more decisive role in political change than many other forms of resistance, such as protests and boycotts.

FW de Klerk (85) will never be able to claim sole credit for SA’s transition to democracy. Yet his bold actions in the short few years between the spring of 1989 and the autumn of 1994 were critical to the eventual success of the historic process mentioned by Jenkins.

When De Klerk was elected leader of the National Party in February 1989, he took charge of a confused party. Eleven years of PW Botha’s belligerence, more than 40 years of uninterrupted rule, a big right-wing split from the party in 1982 and the numbing realisation that it was carrying the dead baby of apartheid/separate development, had taken its toll.

The state bureaucracy De Klerk inherited in September 1989 on assuming the presidency was similarly demoralised. The political masters had run out of ideas. The SA economy was in tatters and the Afrikaners’ beloved Republiek van Suid-Afrika was a pariah state, banned from international sports and avoided by global entertainers and celebrities. By day the diplomats in foreign lands fought in the trenches, by night they cabled back to Pretoria: we can’t hold the line for much longer. The world, even our oldest friends, are turning their backs on us. Apartheid is killing us.

Only the state security apparatus was unperturbed. Under the umbrella of PW Botha’s all-powerful State Security Council, the SA Police, the National Intelligence Service and the SA Defence Force were effectively in charge of the country. Only in later years would the abuses of human rights and other atrocities during this period of de facto military rule be laid bare in court proceedings and in the TRC hearings.

De Klerk was a closed book when he ascended to power in September 1989. Throughout his career in politics, starting in 1972 when he was first elected to parliament as MP for Vereeniging, he studiously avoided NP factional politics. He may not have been very conservative, but liberal or verlig he definitely was not. As a cabinet minister in charge of tertiary education he was a consistent defender of segregated universities. When Pik Botha made his sensational black president remark in 1986, De Klerk, along with other party heavyweights, strongly objected, moving PW Botha to repudiate Pik Botha.

Yet three years later De Klerk embarked on a process that would lead to exactly that — a black head of state in a constitutional democracy.

Among De Klerk’s less-mentioned achievements were that, throughout the transition, he managed to hold together his nervous party, the fractious state machinery and tagged along the white voters, the majority of which was Afrikaans and virulently opposed to majority rule, to reach the end-destination of April 27 1994.

An earlier undertaking by De Klerk that he would seek the approval of white voters for any major changes to the constitutional order had put him in a tight spot. What if they had vetoed such changes? Would SA have survived?

De Klerk overcame this dilemma with a shrewd political manoeuvre, almost as bold and opportunistic as his historic speech of February 2 1990 in which he announced the release of Nelson Mandela and the unbanning of the liberation movements.

Early in 1992 a projection from by-election results in the former Nat stronghold of Potchefstroom indicated that the ultra-right-wing Conservative Party (CP) could win a future whites-only general election. Since its inception in 1982 the CP steadily increased its share of the white vote, supplanting in 1988 the liberal Progressive Federal Party as official opposition in parliament.

This projection squared with De Klerk’s own gut. Without consulting formal party structures, he used his prerogative as head of state and called a national referendum among white voters for early March 1992. Voters were asked to simply say yes or no to the continuation of the Codesa negotiations.

De Klerk’s gamble paid off. Realising the gravity of the moment, opposition white voters swung in behind the yes vote, along with much of civil society, the churches, and business. The yes vote prevailed by a whopping 68.74%.

De Klerk’s next hurdle was the second round of the Codesa negotiations, after the collapse of the first round in May 1992.  Conservatives in his own party, certain academics and sections of the Nat-supporting press — notably Rapport and Die Burger — criticised De Klerk for his strategy and the negotiating team he selected. Some even said De Klerk should have drawn out the negotiations for at least another five years in the hope of “weakening” the ANC.  De Klerk ignored them.

Much is often made of the fact that Nelson Mandela and De Klerk disliked each other throughout this tumultuous period. Yet it was never required of De Klerk and Mandela to be besties for the transition to succeed. They were indeed two very different types of personality. They only needed to be businesslike and rational in their interactions — which they managed to be. It is believed that the relations between them became warmer after they retired from active politics.

De Klerk’s political career went mostly downhill after 1994. Succumbing to conservative pressure in his party, in 1996 he prematurely relinquished the deputy-presidency of the country and withdrew the six NP ministers from Mandela’s cabinet — much to their  disappointment.

He gave as reason the ANC’s refusal to enshrine the concept of a government of national unity in the final 1996 Constitution. Party insiders said at the time this decision had much to do with De Klerk’s inability to adjust to his new status where, after five years of being in charge, he suddenly had to play third fiddle to Mandela and then Deputy President Thabo Mbeki. Maybe he was just exhausted. His work, after all, was done.

But perhaps the lowest point in his career was his appearance before the Truth and Reconciliation Commission (TRC) in 1997 as a former leader of the National Party who since 1978 had served in successive Nat cabinets. Before the TRC De Klerk admitted to the injustice of apartheid and issued what he described as a heartfelt apology.

Yet, when asked about his role in top-level decisions which had led to the death of activists, he went into Vereeniging lawyer-mode and bluntly refused to accept any culpability, stating that he was never part of any decision that sanctioned murder and other crimes. He was not believed and this denial overshadowed his earlier admission and apology. De Klerk’s TRC appearance was branded a missed opportunity and made him susceptible to an accusation of being indifferent to the suffering of black South Africans under apartheid by not making it his business to find out what the securocrats were up to.

De Klerk’s private life was briefly scandalised, again mostly in the Afrikaans press, when it was revealed that he had an extramarital affair with Elita Georgiades, glamorous wife of wealthy Greek shipping magnate Tony Georgiades, who had business relations with the NP government. In 1996 De Klerk divorced Marike, his wife of 37 years, and married Elita after her divorce from her husband.

The couple repaired to a boutique wine estate near Paarl in the Western Cape. They later moved to the upmarket seaside suburb of Fresnaye in Cape Town. Marike died tragically in 2001 when she was attacked in the security complex in Blouberg Strand where she lived.

De Klerk formed the FW de Klerk Foundation for Constitutional Rights. He often travelled abroad on speaking invitations. On occasion he ventured into hotly contested domestic debates, mostly on matters that were near and dear to Afrikaans people. His interventions made little impact.

In 2020, before he fell seriously ill, he was enveloped in a fierce controversy when the Economic Freedom Fighters disrupted the opening of parliament with aggressive demands that De Klerk leave the public gallery because he was, according to the EFF, a “killer” and in charge of the apartheid system, formally declared a crime against humanity by the UN general assembly.

In a statement De Klerk took issue with the “crime against humanity” UN resolution. In the process he worsened the furore as well as his own embarrassment. A few days later he issued a retraction and apology. Insiders put the blame for this unseemly spat on ill-considered input from certain office bearers at his foundation, clearly tone-deaf and out of touch with the prevailing social and political climate in the country.

In May this year, De Klerk announced that he was being treated for advanced cancer. He was a heavy smoker for most of his life but stopped more than a decade ago. He is survived by Elita and two children, Jan and Susan, and a number of grandchildren.

FW de Klerk leaves behind a fiercely contested legacy. To many white Afrikaners he will always be the “traitor who gave the country away and delivered them to ANC misrule, corruption and abuse. Many black South Africans refuse to acknowledge his statesmanship, saying he merely agreed to abandon an abhorrent, immoral system of white domination because he was forced to do so.

Others hail him for his political bravery to formally end apartheid, something his far more powerful and reform-minded predecessors such as BJ Vorster and PW Botha never had the courage to do.

De Klerk was no Nelson Mandela. Yet he did to apartheid what Mikhail Gorbachev did to Soviet communism: destroyed the last remnants of what was once a dream for some, but a terrible nightmare for most. For that he deserved the Nobel Prize for Peace which he shared with Mandela.

• Tim du Plessis is a former editor of Rapport and Beeld.

Referred to as ‘the last white ruler of South Africa’, De Klerk shared the Nobel Peace Prize in 1993 with Nelson Mandela
National
6 months ago

A new book delves into the backstory of the negotiations that ended apartheid and forged a multiparty democracy in SA — the secret talks and power ...
Features
8 months ago

Award-winning writer, poet, journalist and all-round wordsmith Peter Wilhelm died on October 17. An FM stalwart, he’ll be remembered for his ...
Features
6 months ago

Despite listening devices recording every sound he made, officials failed to get a measure of the man
Opinion
1 year ago
Next Article