I will take my son to the police if he is corrupt, Cyril Ramaphosa vows 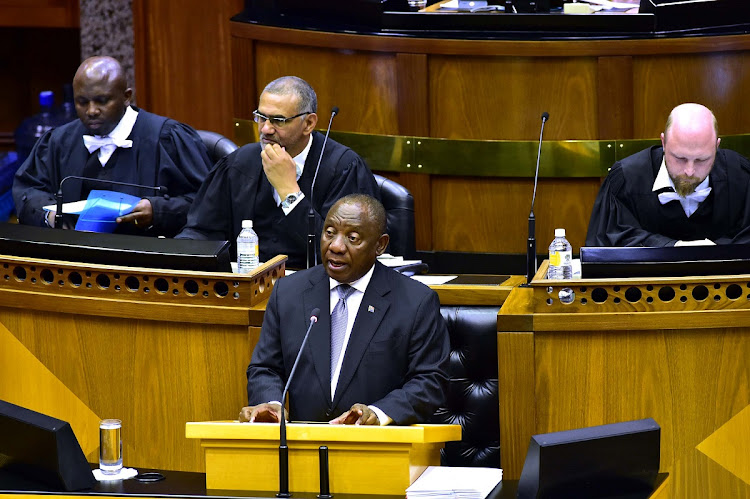 President Cyril Ramaphosa says he is prepared to present his son, Andile, to law-enforcement agencies should he be found to have engaged in corrupt or illegal activities.

During a question and answer session in the National Assembly on Tuesday, DA leader Mmusi Maimane said he had evidence that Ramaphosa’s son had received a R500,000 payment from corruption-accused facilities company Bosasa, via a trust account.

The company has secured multimillion rand tenders with the government in recent years. In 2017, it changed its name to African Global Operations.

Ramaphosa confirmed that his son had done some consultancy work for Bosasa.

“This matter was brought to my attention and I asked my son [about it] … he runs a financial consultancy business and consults for a number of companies, and one of them is Bosasa…. I asked him at close range whether this money was … obtained illegally and he says this was for a service provided, and to this end he showed me a contract, which was signed with Bosasa,” Ramaphosa said.

“He is running a clear and honest business. If it turns out there was any illegality I can assure that I will be the first to make sure he is held accountable, even if it means taking him to the police station myself. I have told [my children] that you do not do any business with government or state-owned entities. If there is any illegality or corruption I will take them if need be to jail myself.”

In September, it emerged that senior ANC MP Vincent Smith had been paid ‘‘at least” R670,000 by Bosasa over the past three years and had accepted security installations at his home valued at R200,000.

Smith confirmed at the time he had entered into an agreement for ‘‘a personal loan with Mr A Agrizzi [former Bosasa boss]”. The loan was for his daughter’s university fees and was processed in two separate payments: R220,000 in 2015 and R395,000 in 2016.

He denied Bosasa had installed CCTV cameras at his home, adding that he was in “support of being held accountable” and would “participate in the parliamentary process led by the ethics committee’”

Smith has since stepped down from chairing any parliamentary committee until the ethics committee concludes looking into allegations against him.

The ANC MP allegedly received payments from the Bosasa group but says he welcomes the investigation, initiated by the DA
Politics
3 years ago

Executing a clean and speedy prosecution of the VBS looters will help give hope to South Africans.
National
3 years ago

City Press reported on Sunday that Smith had been paid ‘at least’ R670,000 by Bosasa over the past three years and had accepted security ...
National
3 years ago

The party was key in investigating others, now it must use the same standards on itself
Politics
3 years ago
Next Article

No VBS funds went to party or Shivambu, says EFF

No VBS funds went to party or Shivambu, says EFF