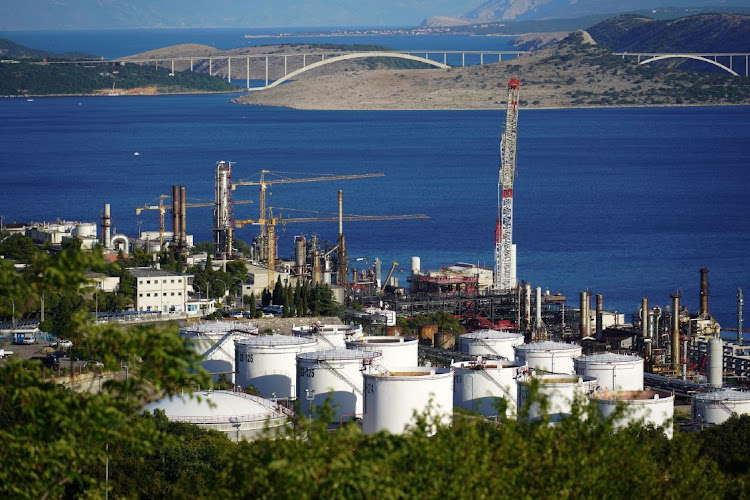 The INA Industrija Nafte oil refinery on the shores of the Adriatic sea in Urinj, Croatia on July 18 2022. Picture: Oliver Bunic/Bloomberg

Melbourne — Oil prices climbed in Asia trading on Friday, rebounding from previous declines on supply tightness and geopolitical tensions even though weakened demand in the US has cast a shadow on the market this week.

“Things are still negative on the economic front, but we are still in a structural shortfall for prompt oil and that means physical buyers will be there to support dips knowing the uncertainty of what lies ahead on the geopolitical front,” said Stephen Innes, managing partner at SPI Asset Management.

He said investors had next week’s US Federal Reserve decision on interest rates firmly on their minds. Fed officials have indicated that the central bank would likely raise rates by 75 basis points at its July 26-27 meeting.

“While 75 is in the cards, guidance will be important and any softening in the rate hike outlook would be great for global growth,” Innes added.

While signs of softening US demand weighed on oil prices and sent benchmark contracts sliding around 3% in the previous session, tight global supplies continued to keep the market buoyed.

“Despite the sharp decline in oil prices, the outlook for the supply issue remains problematic. Until proven evidence for softened demands comes into sight, the [Ukraine] war-intensified supply shortage will keep the oil prices staying strong,” said Tina Teng, an analyst at CMC Markets.

WTI has been pummelled over the past two sessions after data showed that US petrol demand had dropped nearly 8% from a year earlier in the midst of the peak summer driving season, hit by record prices at the pump.

In contrast, signs of strong demand in Asia propped up the Brent benchmark, putting it on course for its first weekly gain in six weeks.

Demand in India for petrol and distillate fuels rose to record highs in June, despite higher prices, with total refined product consumption running at 18% more than a year ago and Indian refineries operating near their busiest levels ever, RBC analysts said.

“This signals much more than a strong recovery from Covid-plagued years,” RBC analyst Michael Tran said in a note.