The Toyota is smooth and satisfying, but doesn't achieve promised parsimony in real-world driving 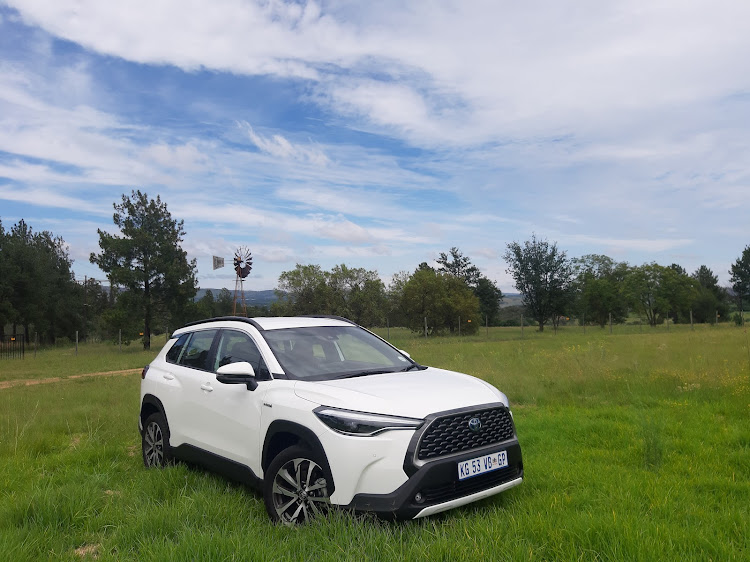 The Corolla Cross Hybrid has a 1.8l petrol engine coupled to an electric motor which operate either in tandem or on their own. Picture: STUART JOHNSTON

This past holiday season for me was one of those where, as the Bob Dylan song goes, “you ain’t goin’ nowhere!” In light of this, I looked forward to tootling around Joburg and environs in ever-diminishing traffic while most people headed for what they hoped were sunny climes in the coastal regions.

The Hybrid version of the newly-introduced Toyota Corolla Cross was offered to me as holiday ride, and I must say it fit the bill perfectly. Hybrids of the Toyota ilk are in their element in urban environs, perhaps less so on long inter-city hauls, and so I set about watching that energy display on the infotainment display like a hawk, while appreciating the fine package that makes up the Corolla Cross in general.

Some years ago I spent almost 12 months with a Toyota Prius on a long-term test, and having lived with the Corolla Cross for two weeks it came as no surprise to discover that the powertrain in this new Hybrid model, now produced at Toyota’s plant outside Durban, is almost pure Prius.

This means it has a 1.8l petrol engine coupled to an electric motor which operate either in tandem or on their own to feed power through a CVT gearbox to the front wheels. The total power output for the combined engines is 90kW. The torque figures for both engines are listed independently as 142Nm for the petrol motor plus 163Nm from the electric engine.

Toyota claims a rather exceptional overall fuel consumption figure of 4.3l/100km for the Corolla Cross Hybrid, and I was keen to see whether this would be realisable in real-world terms.

When I took delivery of the car the average fuel consumption read out was 6.2l/100km, and as I wasn’t in any kind of hurry in the days leading up to Christmas and on to January 10 in this new year, I was looking forward to achieving a figure close to the manufacturer’s claims.

When you start the Corolla Cross Hybrid, there is no immediate reaction from the engine compartment, as the car operates on electric-only mode at idle and at very low speeds. This remained a bit disconcerting throughout my period with the car, as I am used to an engine noise, but the aura of complete quiet was also strangely satisfying. You know you are doing your bit for the planet’s atmosphere, at least during the start-up phase. And once on the move, well, the particular 1.8l engine fitted is profiled very much towards the economy end of the spectrum.

Like the engine used in all the Prius cars that have gone on sale here, this engine is a so-called Atkinson Cycle engine. This means that, unlike performance-orientated engines, the intake valves on each compression stroke remain open for a longer period and thus feeds some of the intake charge back into the manifold area. This charge is then recycled on the next combustion cycle for reintroduction into the engine on the following inlet stroke. 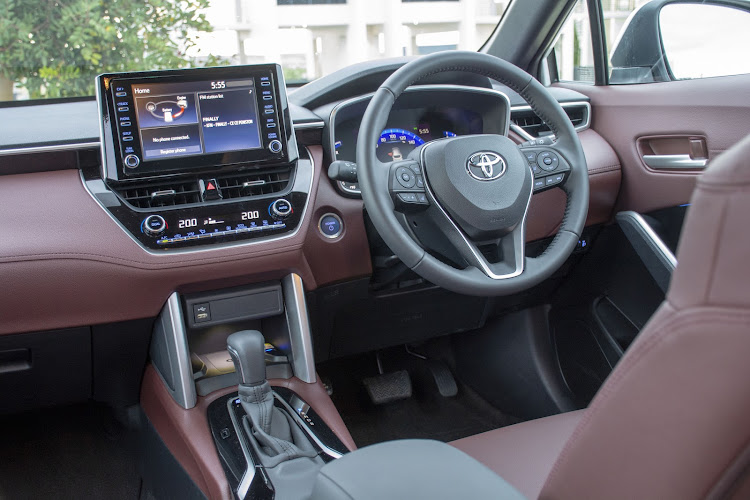 In practise it works as per a normal petrol engine, except that the Atkinson engine doesn’t have too much in the way of serious thrust. The petrol engine comes into play almost every time you touch the throttle, and even with the full assistance of the electric motor, acceleration has to be described as leisurely.

No 0-100 km/h time is listed for the Corolla Cross Hybrid, but I would be surprised if it came in at much below 13 seconds.

I soon learned to drive the car in the way it was intended, which is with a save-the-planet type of mindset, minimising emissions at all costs. Driven this way, the car is very smooth and satisfying to drive around the suburbs and in the city.

One the highway, just as I discovered with the earlier Prius, the petrol engine’s note can get a bit strident, as the CVT (Continuously Variable Transmission) tends to keep the revs well up when you are going uphill. Paddle shifts to mimic upward gear shifts, as are available on various other cars equipped with CVTs, would have been more relaxing, but they are not available on the Corolla Cross Hybrid.

For the rest, we worked at reducing the overall consumption figure, keeping an eye on the economy metre on the dashboard that lets you knows when you are being irresponsible.  Driven in this sedate manner the Corolla Cross’s chassis is excellent. The ride is super smooth over most conditions, and it is only when traversing speed bumps of the sharp-edged variety that you have to take care. Here, if you ride the humps too quickly, the suspension extends to its maximum before you except it to, and this is accompanied by a disturbing “clonk” that somewhat spoils the overall smoothness of the Corolla Cross experience.

As time went on we managed to reduce the consumption figure to 5.9l/100km, and I have to say this was achieved with extremely moderate driving. I would be amazed if the average owner could beat this figure, as we were really trying to get that consumption meter to come down. In this sense, the overall consumption figure of the Hybrid is something of a disappointment, but one has to consider that the Cross is no lightweight at some 1,400kg.

One aspect of the car that we didn’t enjoy too much is the small size of the fuel tank. Despite getting the consumption down under the 6.0l/100km mark, the tank’s maximum capacity is just 38l, so frequent top-ups are going to be a feature of life with the Corolla Cross.

Overall, the Corolla Cross is a great package, with copious amounts of leg room, a large boot measuring 440l, and in this RX trim model, a very durable upholstery cladding in strong-looking leather. At R448,300 it is well priced for such a quality car.

We are not surprised that the Corolla Cross range has set the sales charts alight in its first two months on sale here, averaging more than 1,700 units a month.

We suggest, however, that before you are seduced by the Hybrid badge and all it implies for the ecology, check out the petrol-only offerings in the range. If you do a lot of motoring on the highway, you may be happier with the more powerful 1.8l engine fitted to the petrol-only variants, and on the freeway at 120km/h cruising, fuel consumption will not be much higher than that of the hybrid.

Toyota, BMW and Mercedes have remained a consistent trio on the podium for four years
Life
4 months ago