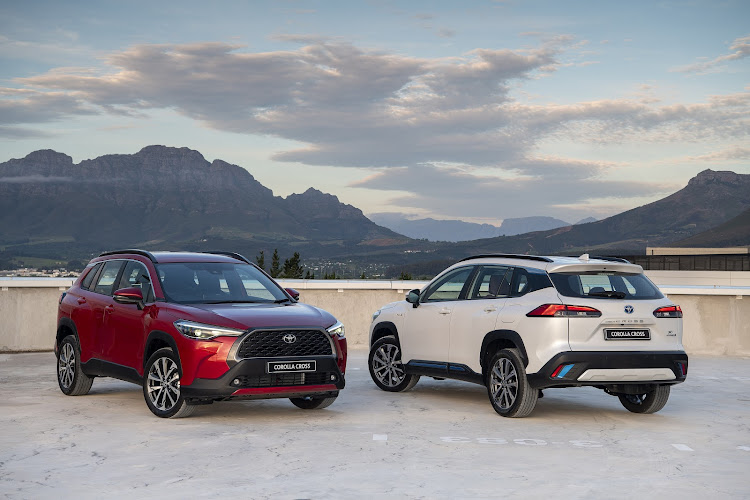 Toyota is banking on its Corolla heritage of nearly five decades to make its new, locally built Corolla Cross become one of the country’s best-selling passenger cars.

The Corolla hasn’t set the sales charts alight in its sedan and hatch guises as consumer demand for those mid-sized body styles has waned, but the new Corolla Cross competes in the country’s fastest-growing market segment: compact crossovers.

Toyota’s ambition of selling at least 20,000 Corolla Cross units a year is bold in a cut-throat crossover segment that sees cheaper-priced Chinese rivals coming to the fore, particularly the new Haval Jolion which sold more than 1,000 units in October.

But with that Corolla heritage, coupled with Toyota’s vast dealer network and solid-as-houses reputation, few would bet against Toyota achieving big numbers with its new crossover.

The #ProudlySouthAfrican tag also carries some weight, with the car built at Toyota’s Prospecton plant for the local market and export to Africa in a R2.6bn investment.

An even more audacious plan is for more than 50% of Corolla Cross sales to be the hybrid version by 2025. That’s in a market which last year sold a grand total of 324 new-energy vehicles (NEVs), which comprise electric cars and hybrids.

Underpinning these hopes is the keen price of the Corolla Cross Hybrid, which Toyota believes will draw the masses in a way the much more expensive Prius hybrid never managed to. About 35% of pre-orders for the Corolla Cross are for the hybrid version.

At R413,000 the entry-level Corolla Cross Hybrid becomes SA’s cheapest hybrid and carries a R23,000 premium over the petrol-engined version. That’s about R50,000 less than it should cost, says Toyota SA CEO Andrew Kirby, but Toyota has pre-emptively subsidised the price on the expectation that the government will soon offer rebates on NEVs to help transition the local automotive industry from the internal combustion engine (ICE) era into electric vehicles (EVs).

In May, the department of trade, industry & competition committed to the advancement of NEVs with a green paper titled The SA Road to Production of Electric Vehicles, which hinted at duty reductions and tax incentives that could soon lower the prices of EVs and hybrids.

How does it drive?

Is the Corolla Cross good enough to warrant selling in those aforementioned numbers? Its competitive prices and Toyota’s reputation are certainly winning points, as is it being a crossover vehicle with the raised ground clearance that modern-day customers find appealing. 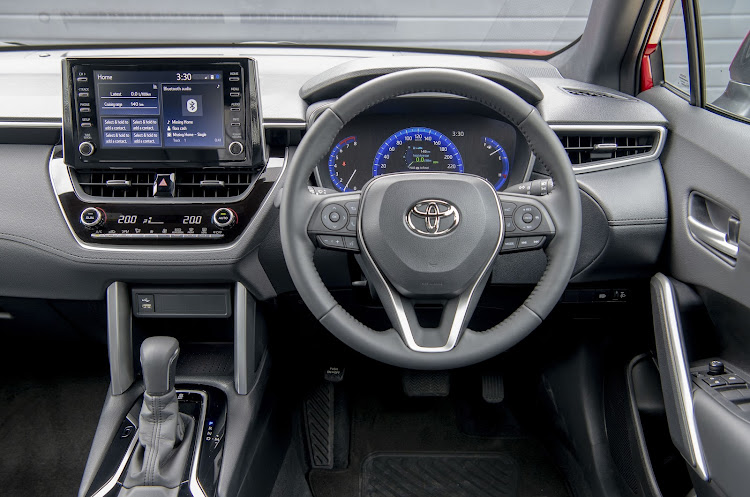 The cabin is family sized and well appointed. Picture: SUPPLIED

With the Hybrid version claiming to run on the smell of a petrol rag, the car also enters the market at an ideal time, with record-high petrol prices pushing more consumers into fuel-efficient vehicles.

The Corolla Cross Hybrid claims a 4.3l/100km consumption on the combined urban/freeway cycle. The test car I drove mostly on freeways at the launch in Cape Town averaged 6.4l, but that figure should reduce significantly around town where hybrids spend more time on electric power.

At sea level the car’s performance is more than adequate. An electric motor combines with a fuel-efficient Atkinson Cycle 1.8l petrol engine for total outputs of 90kW and 142Nm, which makes for a perfunctory commuter that offers no excitement but doesn’t feel underpowered. The CVT auto gearbox offers two-pedalled convenience but tends to make the car drone on the open road, while top speed is rated at 170km/h.

The nonhybrid Corolla Cross is a better freeway cruiser with its 1.8l engine producing a livelier 103kW and 173Nm for a 185km/h top speed, but with fuel consumption rated at a higher 6.8l/100km. It’s also paired with a CVT and there’s no manual in the range.

In terms of family practicality, safety and comfort, the Corolla Cross ticks the boxes. Styling-wise it doesn’t pop out of a cake like the flamboyant Toyota C-HR, but its large grille, elongated lights and pronounced wheel arches give this crossover some decent styling pizazz.

In terms of build quality it seems to have the Toyota-typical solidity, and it’s a quiet running car. It is an all-round polished performer with a comfortable ride and neat handling. The 161mm ground clearance is 30mm higher than a regular Corolla’s, but with only front-wheel drive it’s not any kind of off-road adventurer.

The cabin is impressively spacious. The Corolla Cross is one of the largest vehicles in its class with a 4,460mm length that betters rivals such as the VW T-Cross, Ford EcoSport, Renault Duster, Peugeot 2008 and Mazda CX-3, though slightly shorter than the 4,472mm Jolion. The Toyota also has one of the segment’s roomiest boots at 440l, with rear seats that flip down to enlarge packing space.

There are soft-touch materials to give the cabin a more premium feel, and the digital fare is as per the modern trend with a touchscreen infotainment system and smartphone connectivity.

The hybrid model carries an eight-year warranty on the hybrid battery.

Chinese car impresses with refinement and keen pricing, if not its bleeping safety systems
Life
5 months ago