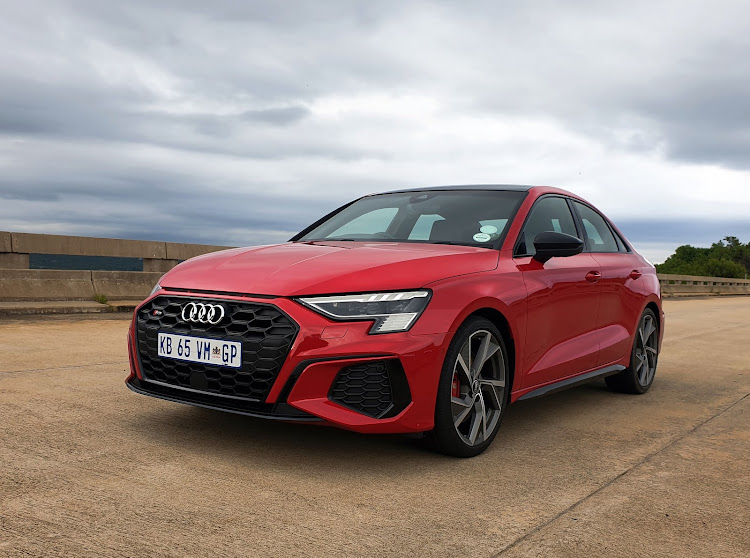 The S3 feels brisk without being brutal, and the handling is top notch. Picture: DENIS DROPPA

For certain drivers the high-performance RS badge is the key to realising driving nirvana in the Audi camp, and the more powerful and angry the car, the better.

But not everyone needs a hot-tempered Rottweiler, and Audi’s line-up of lesser-powered, S-badged cars provide athletic thrills without all the seething rage.

It was about 20 years ago that the four-ringed badge entered the sporty premium compact market segment with the first S3, and the car recently arrived in SA in its latest guise.

Until the more powerful RS3 comes along later, the S3 is top dog in the new fourth-generation A3 range. It’s available as a five-door Sportback for R815,000, and a four-door sedan for R830,000 — the subject of this test.

Sharing a platform with the new eighth-generation Volkswagen Golf, the new A3 is a bolder looking car than its predecessor, thanks to its larger single-frame grille and more prominent wheel arches. The S3 gets additional styling aggression with a large rear diffuser, four tailpipes, 19-inch wheels, red brake calipers and S-model specific bumpers.

It crouches 15mm lower than regular A3s and is optionally available with adaptive damper control (not fitted to the test car) that lowers the ride height by another 10mm.

Both the Sportback and sedan retain the same wheelbase as the old A3, but interior space has grown a little. The sedan packs four people into its cabin in reasonable comfort, but taller rear passengers might prefer more legroom.

Boot space is unchanged from before, with each body style offering its pros and cons. The sedan has the larger boot at 425l versus 380l, but the Sportback allows bulkier items to be loaded through its hatch door.

The interior’s undergone a major restyle, becoming more digitised and driver focused. Trapezoidal air vents have replaced the previous round ones, and the automatic gear lever has shrunk to aluminium stub.

A digital instrument cluster now comes standard, along with a touchscreen infotainment system that recognises letters entered by hand, provides acoustic feedback, and can be voice controlled.

Smartphone pairing via Apple CarPlay and Android Auto can be done wirelessly and the car offers inductive smartphone charging. 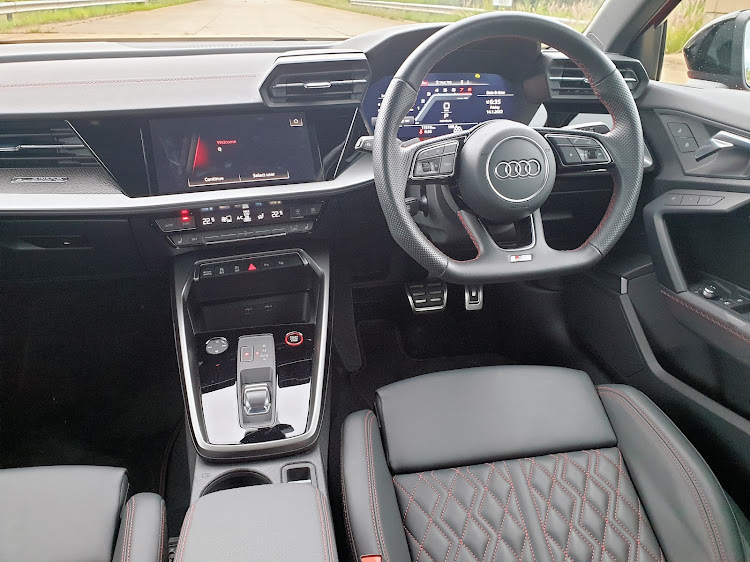 I’m impressed with the convenience of the S3’s cabin controls. It’s more user-friendly than the all-digital system of its Golf 8 cousin, and retains some physical buttons to easily quick-access oft-used features. Also, the touchscreen doesn’t have the gimmicky haptic feedback of some Audis which requires icons to be jabbed harder.

There are two type-C USB ports for charging smartphones in the front, and optionally two at the back as well, with rear passengers also getting their own air vents if you tick that options box.

Standard fare in the S3 is relatively generous but, as usual with premium German cars, the really cool stuff costs extra. Some of the optional items in the test car included electric front seats (R19,300), a technology package with navigation and a larger digital instrument panel (R33,500), and a Bang & Olufsen premium sound system (R8,500).

I particularly liked the smart-looking Nappa leather seats with red stitching, which really made the interior pop, but these were also an expensive R21,500 option.

The S3 is powered by a four-cylinder 2.0l petrol turbo with 213kW, detuned from the 228kW available in Europe, but it retains the Europe-spec 400Nm of torque. It’s sent to all four wheels via quattro drive and a seven-speed S Tronic automatic, for a claimed 0-100km/h sprint in 4.9 seconds.

The test car ran a 5.3 second 0-100km/h in our high-altitude test at Gerotek, with the aid of an easy-to-use launch control system.

At Gauteng altitude there’s some initial low-rev laziness before the turbocharged engine gets into its high-adrenaline sweet spot, but once in this zone, power is endearingly brisk without being explosive.

This is a civilised sort of performance, not the foam-at-the-mouth excess of an RS-badged Audi which requires better-than-average driving skills to exploit properly. 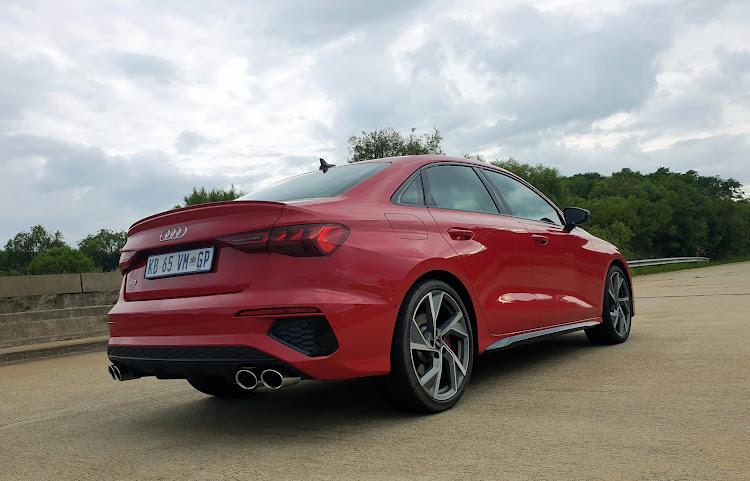 Red brake calipers and a quartet of tailpipes are visual cues to the S3's sporting abilities. Picture: DENIS DROPPA

The S3’s chassis feels like it could handle an angrier beast beneath the bonnet. With immense grip and powerful brakes the car is all about precision and easy-going finesse when pressed hard through a series of corners, allowing you to take somewhat daring liberties.

With an all-wheel drive system that distributes drive torque between the front and rear axles fully variably depending on the driving situation, the nose finds apexes with unerring accuracy. Up to 100% of torque can be directed to the rear axle, allowing tail flicks to be teased out on demand.

On regular and mildly bumpy roads the suspension’s firm without being uncomfortably jarring, but the low-profile 19-inch tyres need to be carefully guided around potholes to prevent harsh jolts.

The car’s relative civility does not make for a sanitised experience devoid of charm. In the Dynamic setting — one of five driving modes the driver can choose from — the exhaust delivers a playful machine-gun crackle, adding a racy edge to proceedings.

All told, the S3 is civilised and accessible without being neutered. You could say it leaves you stirred, not shaken. While lacking the sabre-toothed performance of its RS-badged stablemates, it has enough pace and charm to register on an enthusiast driver’s fun-to-drive Richter scale.

WE DISLIKE: High cost of options

Mercedes-AMG A35 is swift and sensible

At a more than R270,000 saving over the flagship A45 S, the A35 still offers compelling performance
Life
1 year ago

With no bellowing ghost in the machine, it’s an entirely new way of liking or disliking the flagship, says Phuti Mpyane
Life
2 years ago
Next Article