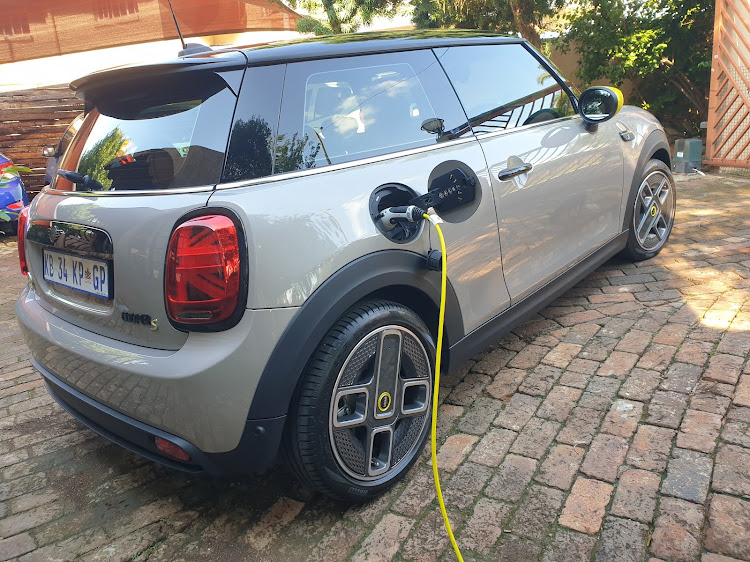 This Mini is consigned to the range-anxiety lane with its real-world 160km range. Picture: DENIS DROPPA

Electric vehicles (EVs) have slowly trickled out of local showrooms as they are still too expensive to attract the commuting masses. A recent AutoTrader survey found that two thirds of South Africans would consider buying an EV if it was priced under R500,000, and we’re still some way from that with the Mini Cooper SE the country’s cheapest battery-powered car at R686,400.

That is expensive with a traditional pay-to-own approach, but more affordable on finance packages aimed at usage. The Mini Select plan reduces monthly instalments by giving customers the option of returning the vehicle at a guaranteed value at the end of the contract; alternatively there’s a rental plan with no deposit and a fixed monthly instalment.

The question is whether you’d want to have an electric Mini as your daily drive instead of a petrol-powered one. The cheapest fuel-burning version is the Mini One which gives you 75kW and 190Nm for R401,050, while the electric Mini’s closest-powered petrol rival in the range is the Cooper S with 141kW and 280Nm, priced at R564,058. The petrol models also offer the flexible finance schemes.

This makes the battery Mini a hard sell on the face of it, especially given how often it needs charging.

Premium EVs with seven-figure prices get a usable 400km-odd on a single charge but this Mini is still consigned to the range-anxiety lane with its small battery, which gives a claimed range of 217km and an actual real-world 160km range according to the test car’s trip computer.

That distance is enough for commuting, but extended trips beyond urban limits aren’t really on the menu unless there is a fast charger at the destination.

Life in the electric Mini isn’t too impractical if you treat it like a smartphone and charge it overnight at off-peak times, which is the least expensive option unless you charge it at BMW and Mini-branded public chargers which is free of charge.

If you travel 100km a day it takes about 23 minutes to charge the power you need at a DC rapid charging station. At a slower AC charging station or a home Wallbox it will take about 2.5 hours, or six hours at an ordinary domestic socket.

It costs about R23 at Eskom’s rate to run the Cooper SE for 100km, a lot cheaper than the R203 it would cost a petrol car consuming 10l/100km for the same distance.

As cheap as the Cooper SE is to run, however, it would take a long time to win back the extra R122,342 it costs over the petrol Cooper S.

The Mini Cooper SE comes standard with a two-year/unlimited mileage warranty and an eight-year/100,000km battery warranty.

The car stands out from regular Mini models by its Energetic Yellow accents in several places, including the closed radiator grille, mirror caps, tailgate and wheels. The 17-inch wheels have a unique “Power Spoke” design. 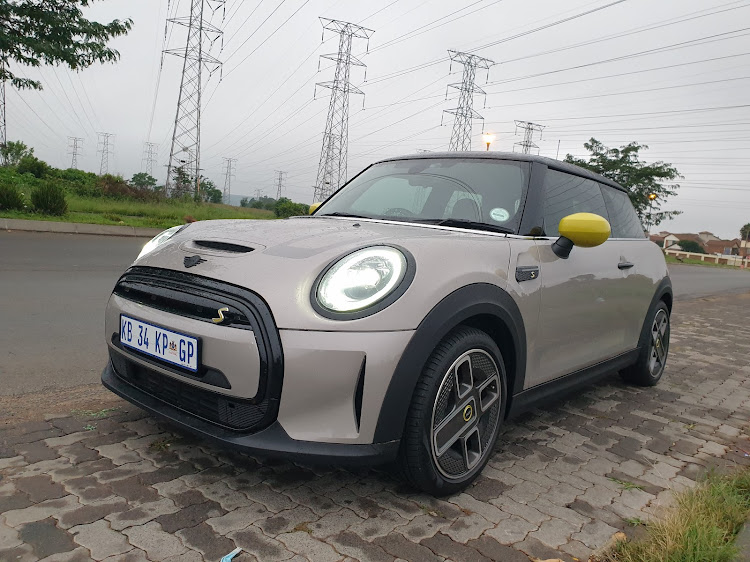 Though heavier, the Cooper SE handles with the signature quick steering and agility of Minis. Picture: DENIS DROPPA

The Cooper hatch has limited appeal as a family car with its three doors and limited rear seating space, which is more suitable for small children than adults. The boot is a modest 211l but expands to a useful 731l with the rear seats folded.

From a driving perspective the electric Cooper SE maintains the Mini-typical appeal. It’s quite a pleasurable drive with a spontaneous response and ability to briskly but silently whisk about town. Outputs of 135kW and 270Nm are translated into a creditable 7.3 second 0-100km/h sprint, but the car feels quicker than that because of the instant way that electric motors generate their power.

The car scoots off the line with no lag, and there are no gear changes, making for an endearingly seamless surge of power. There’s a strong braking effect from the energy recuperation system when you take your foot off the throttle, which takes some getting used to. It’s seldom necessary to use the brake pedal at all, except for when coming to a dead halt, which means the brake pads will probably last for ages.

Four driving modes allow the driver to shift between a longer range or more responsive acceleration.

The Cooper SE scoots about with the signature quick steering and agility we’re used to from Minis. The car weighs nearly 200kg more than a petrol Cooper S but in normal driving you can’t really feel it because the battery is mounted in the floor to create a low centre of gravity.

One can’t fault this electric Mini for its driveability and its usefulness as a short-hop urban commuter, but as likable as it is, the Cooper SE’s high price and short range limit its appeal.

Even with petrol prices what they are, it will take a long time to win back this EV’s high price tag with its cheaper running costs.

The world’s biggest carmaker plans to have 30 EVs by 2030, with Lexus fully electric by 2035
Life
1 month ago
Next Article

Christmas gifts for the petrolhead

Christmas gifts for the petrolhead