Diesel-engined E-Class offers luxury with parsimony, but it’s not for performance seekers 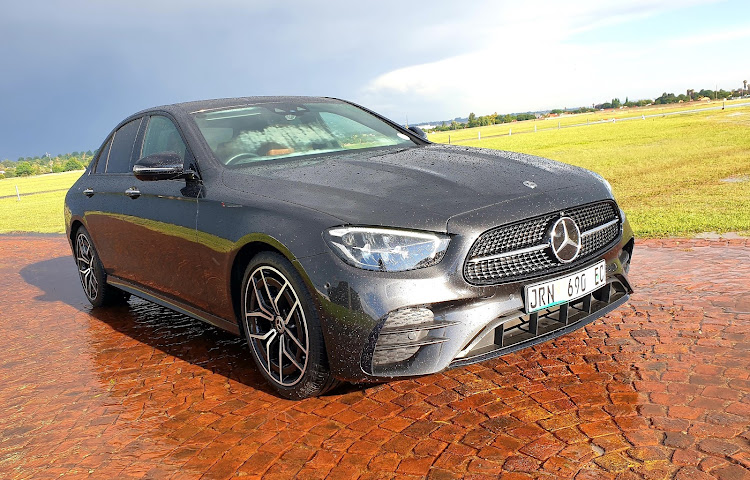 The entry-level model now comes with the sporty Avantgarde line exterior which features a central star in the grille and power domes in the bonnet. Picture: DENIS DROPPA

While the great consumer trek to SUVs continues, the elevated driving position craze hasn’t quite gripped everybody. Sedans like the Mercedes-Benz E-Class continue to provide luxury motoring to the dwindling number of consumers who don’t mind sitting a little lower when they drive.

With more than 14-million sales since 1946, the E-Class is the brand’s best-selling car and the current W213 generation, launched back in 2016, has undergone an update to see it through to the next-generation E-Class which will arrive around 2023.

The refresh, also applied to the E-Class coupé and cabriolet models, involves a facelift, some interior upgrades and updated technology. The minor styling tweak comprises a redesigned radiator grille, headlamps and front bumper, and additional freshening in the form of a new rear bumper and split tail lamps.

The entry-level model now comes with the sporty Avantgarde line exterior which features a central star in the grille and power domes in the bonnet. All-LED headlamps come standard, with ultra range multibeam LEDs available as an option.

Inside, the E-Class adopts a new steering wheel available in three versions, and upgrades to the latest MBUX multimedia system which has two high-resolution screens for a widescreen effect. 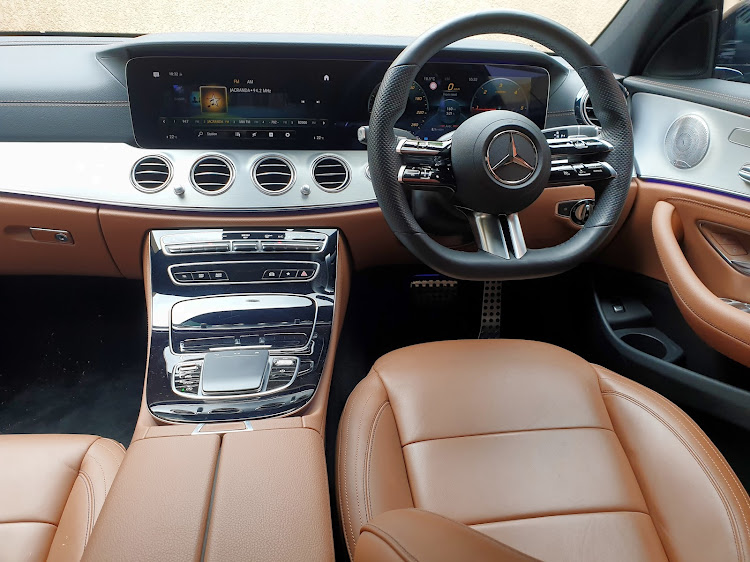 The large centre screen is now touch-operated, unlike before. The car’s systems can also be operated by touch controls on the steering wheel, a laptop-style touchpad between the seats, or an array of physical buttons — Mercedes doesn’t skimp on providing options to interact with the car in the way owners find most user friendly.

The familiar “Hey Mercedes” function was hit and miss in being able to understand my clearest Saffer accent however, and perfection of voice control still eludes the motor industry.

The latest MBUX system incudes augmented reality that displays additional information, such as house numbers, in the video image of the surroundings.

Updated driving assistance systems include the Distronic active cruise control now being able to more quickly detect tailbacks and slow-moving traffic. Active Blind Spot Assist monitors the surroundings when at standstill and can warn the driver of approaching vehicles, motorcycles or bicycles when opening the door.

Energising seat kinetics is another new feature in the E-Class, making small movements of the seat to help prevent bodily aches on long journeys.

Décor in the plush and roomy cabin is all top-notch, with metallic accents and fine-grain leather radiating business-class opulence. The E-Class has a grown-up feel with exceptional refinement, its sound-deadened cabin cocooning occupants from the outside world’s unwanted noises.

The Agility Control selective damping automatically optimises the ride characteristics for varying road surfaces, but the test car’s ride quality was a mixed bag. On smooth tar it was the definition of a soothing ride, floating away the kilometres in wafting comfort. But potholes and smaller bumps caused jolts which may have been attributable to the test car’s optional 19-inch low-profile tyres. 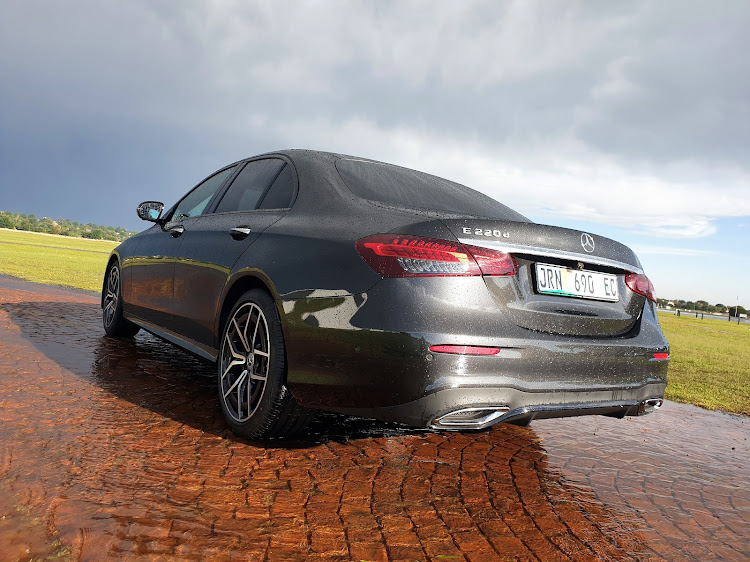 The E-Class has a grown-up feel with exceptional refinement. Picture: DENIS DROPPA

As is usual with luxury German vehicles, most of the best toys cost extra. The test car was equipped with about R300,000 worth of options, some of the most expensive ones being an AMG Line exterior (R66,300) which includes the honeycomb-style grille, Driving Assistance Package Plus (R50,300), a panoramic sunroof (R25,100) and Burmester sound system (R18,500). There were many other extras fitted, some of which might be expected to come standard for the R1m-plus price tag. Even the keyless-go and Thermotronic climate control cost extra.

Priced at R1,019,830, the Mercedes E220d AMG Line is theoretically the most sensible choice in the range as it claims the lowest fuel consumption and combines it with a burly 400Nm torque figure and a decent 143kW power output, but its biggest problem is its woeful turbo lag at Gauteng’s high altitude.

Attempting quick pulloffs is frustrated by long hesitations when you punch the throttle. At higher engine revs the big Benz cruises and overtakes with ease, but that low-rev laziness means it’s not an ideal car for impatient drivers in stop-start urban driving.

On the plus side the diesel engine is commendably refined and feels as if it runs on triple-distilled whisky.

The parsimony of diesels is their main selling point and the test car averaged a laudable 8.1l /100km, though we think even the most light-footed driver would be hard pressed to achieve the factory-claimed 5.2l figure.

Its relative lack of thirst makes the E220d an attractive prospect with fuel prices what they are. Lacking the excitement of the higher-powered E53 and E63 AMG models in the E-Class range, this middle-management model flies under the radar, whisking along in silent and unobtrusive luxury. One gets drawn into its mild-mannered, contented cocoon, though not everyone will get used to that turbo lag.